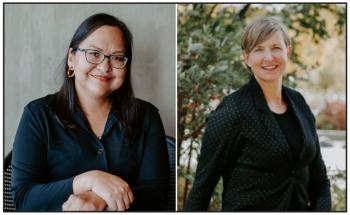 “Starting a business on First Nations is much more challenging than off Nation.” — Trista Pewapisconias
By Sam Laskaris
Local Journalism Initiative Reporter
Windspeaker.com

Early indications are that a guidebook that focuses on First Nations co-operative development across the country will be well received.

The guidebook, titled Your Way, Together, was launched at a virtual ceremony on Tuesday by Co-operatives First, a Saskatoon-based organization that promotes and supports business development in rural and Indigenous communities, primarily in western Canada.

The guidebook can be downloaded for free at https://yourwaytogether.ca/, a new website also launched this week by Co-operatives First.

“The number one thing we want is to start a conversation,” said Audra Krueger, the executive director for Co-operatives First.

Krueger is hoping that conversation will include Co-operatives First representatives who will be able to provide insight into the possible benefits and opportunities that can be had via co-operative business development.

The title Your Way, Together indicates a Co-operatives First willingness to work with Indigenous communities to help find a co-op model that best works for them. They do work with all Indigenous peoples, however, the guidebook itself does specifically focus on the requirements of having a co-op on First Nations.

More than 75 people attended the virtual launch for the guidebook on Tuesday.

Krueger said all of those who took part in the launch have been mailed a printed copy of the guidebook.

Krueger was also thrilled with the number of visits the organization’s new website had received in just one day.

The guidebook had been downloaded 60 times by Wednesday. Also, 38 individuals had signed up to receive a Co-operatives First newsletter.

And eight people had signed up to attend webinars that the organization will be hosting this spring.

These events will be held on April 12 and May 13. These free workshops are both three hours long.

Those attending the webinars will receive an introduction into co-operatives, how Indigenous communities have used co-ops throughout the country and also touch on both the opportunities and challenges facing Indigenous co-op entrepreneurs.

While Krueger is hoping the guidebook is downloaded in droves, she said the plan is also to mail it to as many First Nations as possible.

“We want it distributed to First Nations people and Indigenous people and we want them to reach out to us,” she said.

The majority of the material in the guidebook was compiled by Trista Pewapisconias, who was hired to be Co-operative First’s Indigenous engagement lead three years ago.

Since being brought on, Pewapisconias compiled information she had gathered and also kept notes on the inquiries she had received about First Nations co-op models.

“Starting a business on First Nations is much more challenging than off Nation,” Pewapisconias said. The guidebook includes information on legislation applying to businesses on a First Nation, as well as details on business development and financing.

Pewapisconias said the original plan was not to produce a guidebook with the work she had done.

“It was going to be an internal document for us for working with groups,” said Pewapisconias, a member of Little Pine First Nation in Saskatchewan.

“It was over a year ago we decided with all of our tools and resources to put it online and make it available,” Pewapisconias said.

Krueger is pleased that some of Pewapisconias’ hard work has been turned into a guidebook.

“It was making sure all the research and experiences was captured somewhere,” she said.

Since regulations and bylaws are frequently amended, Krueger added the Your Way, Together downloadable guidebook will, in all likelihood, be updated on an annual basis.

As for Co-operatives First’s new website, Krueger was happy to see plenty of traffic there after it was launched.

“We had a lot of activity on our website, which was great,” she said. “One of the most clicked areas was the case studies.”

There are currently four case studies on the website, featuring details on various Indigenous co-op models.

One of the models featured is eight First Nations in British Columbia that own and operate salmon fisheries.

Another case study is on a group of Indigenous female artisans in Winnipeg who started a co-op.

There’s also information on the Yukon fly-in community of Old Crow, which formed a co-op and established a grocery store to be run by its residents.

And yet another study is on how members of a remote Métis community joined forces to start a co-op in their community in order to keep a local hardware store operating.

The Your Way, Together website also includes a short video, about two minutes long, on starting a co-op model.