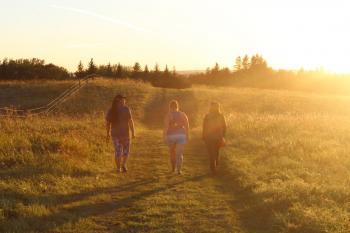 The survey polled more than 1,300 people, ages 16 to 29, to get their thoughts on how Canada’s reconciliation efforts are proceeding.

“Reconciliation is more than just goals and policies. It’s also about how people are feeling about it.” — Keith Neuman, a senior associate for the Environics Institute for Survey Research
By Sam Laskaris
Windspeaker.com Contributor
TORONTO

The results are in.

And officials who conducted a national survey among Indigenous and non-Indigenous youth are encouraged by the general optimism on reconciliation efforts across the country.

Results from the National Youth Reconciliation Barometer were released Monday.

The survey polled more than 1,300 people, ages 16 to 29, to get their thoughts on how Canada’s reconciliation efforts are proceeding.

Indigenous and non-Indigenous people, from every province and territory, were included in the survey. Indigenous respondents included those living on their First Nation land or Indigenous community, as well as those living away from home.

“Nothing has been done like this before,” said Max FineDay, the executive director of Canadian Roots Exchange (CRE), a national organization that has been developing various opportunities for both Indigenous and non-Indigenous youth for the past decade.

Besides the CRE, the national survey on reconciliation was conducted earlier this spring in partnership with the Environics Institute for               Survey Research and the Mastercard Foundation.

The former seeks public opinions and conducts social research related to public policy and social change issues, while the latter has a mission to promote learning and financial inclusion for those in poverty.

Survey results provided plenty of hope as they show Canadians are engaged not only with reconciliation efforts but they are also cognizant of the history of Indigenous and non-Indigenous relationships in the country.

“It’s a gift this country must not squander,” FineDay said.

Keith Neuman, a senior associate for the Environics Institute for Survey Research, is hoping the results of this survey are widely spread.

“The media, policy makers and Indigenous organizations should be paying attention to youth,” he said. “There’s something positive here. Voices of youth need to be heard, whether it’s positive or negative.”

Neuman was caught off guard by one number released in the survey—that 29 per cent of non-Indigenous youth responded they have at least one Indigenous friend.

Neuman also was intrigued by the fact Indigenous and non-Indigenous youth are talking about reconciliation amongst themselves.

“About half of the people that have close friends (from the other grouping) said they have had discussions about reconciliation, which is interesting,” he said. “And those discussions were categorized as meaningful.”

Neuman believes the fact that those who are a part of the country’s future are the ones who are having meaningful discussions about reconciliation is important.

“It’s much more widespread than what we might have expected with the results,” he said.

Neuman was not quite sure what findings would surface from doing the survey.

“It was a bit difficult to guess what we might see,” he said. “With youth we weren’t quite sure what to expect.”

The fact, however, that there were fractured Indigenous and non-Indigenous relationships across Canada and that plans to repair those connections are taking place is well known among younger generations.

Other stats released in the survey include that one-third of Indigenous youth and one in six non-Indigenous youth said they have been involved in a reconciliation activity, such as a community or cultural event.

“Reconciliation is more than just goals and policies,” Neuman added. “It’s also about how people are feeling about it. It adds important knowledge to where we stand on reconciliation today.”

FineDay is encouraged by the fact youth today are learning through school curriculums about why Indigenous and non-Indigenous relationships in Canada were broken.

FineDay, 28, said neither his parents or grandparents would learn about these issues when they were in school.

“I think there is a generational change coming,” he said.

Neuman said the plan is to do a follow-up survey, in all likelihood in two to three years. He added it would probably be too early to do another survey in 2020 as chances are there would not be much time for changes to take effect.