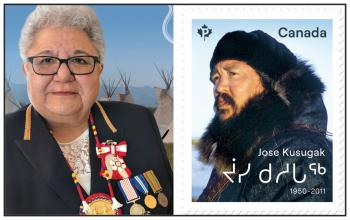 On June 14 in Rankin Inlet, a new commemorative stamp recognizing the accomplishments of Inuit leader Jose Kusugak was celebrated. And on June 15, the commemorative stamp recognizing the 39-year leadership of Chief Marie-Anne Day Walker-Pelletier was presented at the Okanese First Nation in Saskatchewan. She has served the most consecutive terms ever by an elected First Nations chief in Canada.

Day Walker-Pelletier, born in 1954 in Regina, forged a reputation as a matriarch and committed champion of her people. She led numerous projects related to education, wellness and social reform, while also working to preserve the culture, language and traditions of her people.

In 1981, Day Walker-Pelletier took office as chief of the Okanese Nation, initially, intending to serve a single term. She ended up serving 15 two-year terms along with three three-year terms. After her last term ended in 2020, she did not seek re-election.

While no longer serving as chief, she’s still an active and influential leader. Day Walker-Pelletier was part of the Indigenous delegation that met with Pope Francis at the Vatican earlier this year to discuss the Catholic Church's role in the residential school system.

A survivor of that system, Day Walker-Pelletier has been passionate about improving the lives of women and children. In 2021, a year after she retired, her decade-long dream to reintegrate Indigenous foster children into their families culminated in the opening of the Daywalker Home Fire Family Centre.

She was appointed a Member of the Order of Canada in 2018 and invested in 2019 and also received the Saskatchewan Order of Merit in 2021.

Jose Kusugak was an Inuit activist, linguist and award-winning broadcaster, who played a critical role in efforts that led to the creation of Nunavut in 1999. Many consider him a Father of Confederation.

Kusugak (1950-2011) was born in Repulse Bay, N.W.T. (now Naujaat, Nunavut), and dedicated his life to raising awareness of Inuit identity and issues.

Also a survivor of the residential school system, Kusugak began a career as a teacher. He worked at the University of Saskatchewan’s Eskimo Language School and the Churchill Vocational Centre in Manitoba, where he taught Inuktitut and Inuit history. He later served as a cultural and linguistic adviser.

As head of the Inuit Language Commission in the 1970s, he was involved in developing a standardized, dual writing system for Inuktitut, using Roman orthography and syllabics.

In 1971, he joined the Inuit Tapirisat of Canada (ITC), where he used his communication skills to explain the concept of land claims to Inuit communities. Kusugak joined CBC North in 1980 as area manager for the Kivalliq region. After 10 years with CBC, he joined the Inuit Broadcasting Corporation, introducing new areas of programming in Inuktitut.

In 2000, he was elected president of the ITC, whose name was subsequently changed to the Inuit Tapiriit Kanatami (ITK), which means “Inuit are united in Canada.” After leaving the ITK in 2006, Kusugak continued to work in regional politics, negotiating on behalf of the Inuit on a variety of important issues.

The stamps in the Indigenous Leaders Series will be available for purchase at Canada Post outlets and online on June 21, National Indigenous Peoples Day. The set also includes a commemorative stamp to honor Metis leader Harry Daniels, which was unveiled in Regina on June 13.