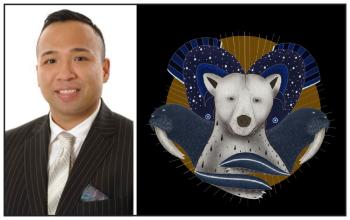 Jason Rasevych, Deloitte Indigenous Services financial leader and partner, with the cover art of the new report Promises, promises: Living up to Canada’s commitments to climate and Indigenous reconciliation from Deloitte.

“We’re doing it off of those principles of nothing about us without us (and) to help support how they can open the door to have Indigenous partners.” —Jason Rasevych, Deloitte Indigenous Services financial leader and partner
By Shari Narine
Local Journalism Initiative Reporter
Windspeaker.com

With the newest report that complements its 2020 Reconciliation Action Plan, Deloitte Canada wants to bring companies, corporations and governments into a meaningful relationship with Indigenous communities with climate change mitigation as the lens.

In March, Deloitte released the 21-page report, Promises, promises: Living up to Canada’s commitments to climate and Indigenous reconciliation.

Co-written by Deloitte’s Indigenous Services financial leader and partner Jason Rasevych and senior national advisor Fiona Kirkpatrick Parsons, the pair drew on numerous sources, including the Intergovernmental Panel on Climate Change and the United Nations Framework Convention on Climate Change, as well as First Nations leaders such as JP Gladu, head of the Indigenous Resources Network, and Cody Desautel, natural resource director for the Confederated Tribes of the Colville Reservation.

This report is a timely addition, says Rasevych, to Deloitte’s work to meet Call to Action 92 from the Truth and Reconciliation Commission’s final report on the legacy of Indian residential schools. That call asks the corporate sector to adopt the United Nations Declaration on the Rights of Indigenous Peoples and to implement meaningful consultation, long-term sustainable opportunities from economic development projects, as well as education and training for managers on the history of Indigenous people, intercultural competency, human rights and anti-racism.

There may not be a lot of new information in the report for those well-versed in the relationship that Indigenous people have with the land, says Rasevych, but for many of Deloitte’s clients and for Deloitte personnel, the report has been “an eye-opener.”

“These statements are very bold statements when it comes to understanding the responsibilities the Creator has provided to Indigenous peoples on the lands. I would say those concepts are new to people who haven’t looked at this at that level before and start to understand that a lot better,” said Rasevych, Anishinaabe from Ginoogaming First Nation.

Desautel is quoted in the report as saying “Many non-Indigenous people look at natural resources from a consumption perspective and that’s not how we look at it. Alongside culture, preservation is our highest priority, not just for now but for generations as well.”

Source Steven Nitah, Indigenous relations advisor with Nature for Justice, says “It is all about the value system. The Indigenous knowledge system is influenced by the values Indigenous people have based on the knowledge that we are dependent on nature and nature depends on us. This reciprocal relationship has never been given the time of day in economics and land use planning exercises.”

Deloitte has a long reach with its wide range of services: audit and assurance, financial advisory, risk advisory, consulting, and tax to public and private clients.

“When it comes to this Indigenous relations and Indigenous reconciliation side of things, as well, we also help advise companies on what they can do to further develop better relationships with Indigenous peoples,” said Rasevych.

“We are working to support a nation-building process where we’re balancing the playing field for First Nations to be better supported in this area. It’s a voice that’s coming up through the firm’s Indigenous people, but it’s also amplifying the voices of those that are working in specific climate-based disciplines,” he said.

In 1990, Deloitte Canada founded Deloitte Indigenous with the focus of providing its range of services to Indigenous leaders, communities and organizations.

In the past 20 years, says Rasevych, Deloitte has worked with more than 250 of the 630-plus First Nations across the country in a variety of areas, including financial audits and helping with the creation of trust funds that result from the specific claims process or industry benefit agreements.

Rasevych said some First Nation leaders are sharing this newest report with governments and industry “who are trying to do business on First Nation territories to highlight some of the messaging that’s in the report.”

That messaging focuses on the importance of reconciliation; tackling climate change with traditional knowledge; meeting Canada’s net-zero and reconciliation through “nature-based solutions”; and employing the four pillars that are part of Deloitte’s Reconciliation Action Plan: inclusion, education, employment and economic empowerment.

“Tying lands and resources to Indigenous participation, social licence and, ultimately, decision-making should encourage indigenous peoples, industry, and the government to collaborate to achieve their mutual goals,” reads the report.

Rasevych says when Deloitte advises companies it’s on the basis of Call to Action 92.

“We’re doing it off of those principles of nothing about us without us (and) to help support how they can open the door to have Indigenous partners,” he said.

To that end, he points out that Deloitte is working on a pro bono project with Nature United to create an Indigenous carbon fund that would focus on investments in Indigenous-led or owned carbon projects.

Nature United, according to its website, “builds diverse partnerships to protect lands and waters and ensure nature is the foundation of healthy communities, economies and future opportunities.” For more than 10 years, those partnerships have included Indigenous-led conservation.

“So we’re trying to help solve the issue of participation, enhancing participation that is more meaningful for Indigenous people to play a role in climate change mitigation,” said Rasevych.

He believes that Canadians, including those looking to invest in public companies, want to see industries, companies and corporations holding a deeper relationship with Indigenous peoples

“There’s going to be a corporate requirement for those standards to showcase where companies are including Indigenous knowledge, and are having the right reports done to be able to engage with them on a meaningful level,” said Rasevych.

It’s in areas like this, he said, that Deloitte’s advice and Reconciliation Action Plan can play an important role.

“The relationship grows at the speed of trust and companies need to think about Indigenous peoples as partners, developing a relationship rather than a transactional relationship,” said Rasevych.

To read the report visit https://www2.deloitte.com/content/dam/Deloitte/ca/Documents/consulting/ca-indigenous-report_en.pdf