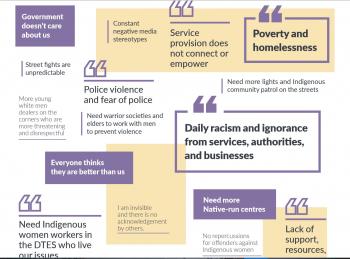 In their own words.

“We all have a role to play in transforming these conditions.” — Harsha Walia, the Downtown Eastside Women’s Centre’s project co-ordinator
By Shari Narine
Windspeaker.com Contributor

Red Women Rising is a rare offering: the report’s experts are its subject.

“It’s rare that women in (Vancouver’s Downtown Eastside) are considered as experts, not only in their own lives, but also in terms of policy solutions and systemic change that needs to happen. This report is unprecedented at placing Indigenous women at the centre of research, of community participation, Indigenous methodology,” said Harsha Walia, the Downtown Eastside Women’s Centre’s project co-ordinator.

“The Downtown Eastside is one neighbourhood, but of course this reality exists across these lands,” said Walia.

“This report is comprehensive and compelling,” said Grand Chief Stewart Phillip of the Union of British Columbia Indian Chiefs.

“I grew up in a really violent home. My dad was really violent and my mom had black eyes all the time. We used to be really scared of him especially when he drank. My mother died when I was 17 years old, when I really needed her,” said Corinne Ducharme, a Cree woman.

For Marlene Jack of the Cheslatta Carrier nation, abuse was both in her home and her community. “Our father … being strict and an alcoholic was a result of his time in residential school. He would beat us up out of the blue sometimes. When I was older I got beat up in my community and no one helped me.”

Marge Humchitt talks about leaving her Heiltsuk community in Bella Bella after being outed as a lesbian. She relocated to Vancouver.

“I have been beaten up, been knifed, been raped, and spent time in jail,” she recounts. “I have also had negative experiences with the police. I remember contacting them after a violent incident and it took them hours to show up. When they did show up, they did not take me seriously.”

The compelling stories, rigorous research, and holistic recommendations within the report drastically and urgently shifts the lens from pathologizing poverty towards amplifying resistance to and healing from all forms of gendered colonial violence, says the Yellowhead Institute, a think-tank for Indigenous issues.

Walia admits the 200 recommendations outlined by the report “are overwhelming because there are so many issues to be tackled and they’re all connected.”

The recommendations are based on guiding pieces that aren’t necessarily new, she says.  The three core principles are the implementation of Indigenous jurisdiction, going back to the key issue of land and ending colonization, implementing the United Nations Declaration on the Rights of Indigenous Peoples; active leadership by Indigenous women at all levels of government to determine policies, services and solutions; and ending structural violence by addressing all socio-economic factors.

Walia says she doesn’t know whether the National Inquiry for Murdered and Missing Indigenous Women and Girls will identify the same core principles.

While Red Women Rising doesn’t offer any dollar figures to go along with the recommendations, Walia highlights one study that says that for every $10 spent on housing $21 is saved in related costs in health care, justice, shelters, and other social supports.

“Of course our main concern is the ethical perspective, but even from an economics perspective, providing services to ensure that Indigenous women, girls, trans and two-spirit people have safety costs less to the system than keeping people (going) with emergency Band-Aid solutions,” she said.

It’s also important, says Walia, for non-Indigenous Canadians to learn about the women in the report.

“Every single person who comes across this report (needs) to sit with it, read women’s diverse stories … to come to terms with individual person’s story and dreams and journeys and to think through that…