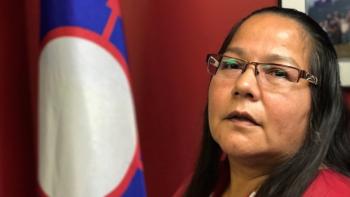 “We need to be moving from that consultation, which was very narrow, as we saw with that ruling which was a few months ago. (The National Energy Board and Trans Mountain Pipeline). Free, prior and informed consent on all matters pertaining to our land and resources." —Chief Judy Wilson, Union of British Columbia Indian Chiefs spokesperson

A report, one-and-a-half years in the making, will prove invaluable as First Nations push the federal government and the provinces to work with them to take the United Nations Declaration on the Rights of Indigenous Peoples (UNDRIP) beyond legislation.

True, Lasting Reconciliation, at 28 pages, sets out a four-point plan:

The report is the joint effort of the Union of British Columbia Indian Chiefs and the Canadian Centre for Policy Alternatives and “helps to fill the gap by advancing discussion” on how UNDRIP can be, and should be implemented, in law, policies and practises in B.C. It particularly stresses free, prior and informed consent.

“We need to be moving from that consultation, which was very narrow, as we saw with that ruling which was a few months ago. (The National Energy Board and Trans Mountain Pipeline). Free, prior and informed consent on all matters pertaining to our land and resources. Title rights. That’s the underpinning that is really important in this work,” said UBCIC spokesperson Judy Wilson.

This report, she says, is just one piece – albeit a vital piece – to further action that the province and B.C. chiefs have begun. It includes the Commitment Document, signed by the provincial government and the First Nations Leadership Council, which set out a path to jointly develop recognition legislation, along with mandate letters that went from Premier John Horgan to his Cabinet ministers directing them to review all policies, programs and legislation in order to bring them in line with the principles of UNDRIP.

“Slowly those pieces will be coming together. Some of the pieces are already there. Some are being developed,” said Wilson.

She stresses that co-development is important. For some First Nations it could take up to a decade as they work through what self-determination looks like for them. The report clearly states that “no ‘one size fits all’ model of Crown-Indigenous relations exists.”

The slow process does not only take into account First Nations determining their own paths to self-government. “Many legislative efforts will be required over time to effect a fundamental shift from patterns of Crown denial to Crown recognition,” reads the report.

The report also looks at Bill C-262, An Act to ensure that the laws of Canada are in harmony with UNDRIP, as the “logical starting place for this legislation,” but points out that the Private Member Bill, introduced by NDP MP Romeo Saganash, does have shortfalls.

It also calls for the bill to have stronger and more transparent oversight mechanisms to ensure that UNDRIP is being implemented by the government.

Bill C-262 was stalled on second reading in the Senate on Oct. 23 when Senator Murray Sinclair asked that debate be adjourned because he was “not ready to speak on this at this time.”

The full adoption and implementation of UNDRIP was one of the 94 Calls to Action by the Truth and Reconciliation Commission, which was chaired by Sinclair.

Chief Wilson considers the True, Lasting Reconciliation report as an important tool for First Nations and governments across the country.

“The paper will provide us with guidelines, but also open up discussion on how those existing pathways need to be changed,” she said.

It’s a lesson the federal government would do well learning, she said.

“This would be a good resource for that because a lot of the initial work of Minister (Carolyn) Bennett fell short,” said Wilson, referring to the move to create a Recognition and Implementation of Rights Framework that has met with strong opposition by the majority of First Nations across the country.

Wilson says the report will be shared with chiefs, the BC government and other organizations.