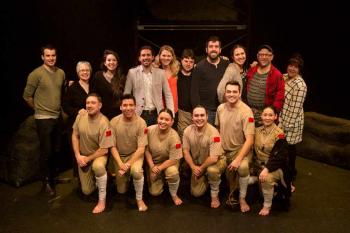 The cast and crew of Redpatch. Photograph courtesy of Mark Halliday, Moonrider Productions. ©2016.

Redpatch runs at the Citadel Theatre in Edmonton from Nov. 1 to Nov. 11.
By Paula E. Kirman

A new play is introducing audiences to a lesser known part of Canada's military history.

Redpatch follows the experiences of a young Métis soldier who volunteers to fight for Canada during the First World War, during which more than 4,000 Indigenous soldiers volunteered to fight for the country.

The origin of Redpatch started in November of 2011.

“I was acting in a play about World War One (Vimy by Vern Thiessen),” said Sean Harris Oliver, co-writer and director of Redpatch. “My good friend Raes Calvert (co-artistic director of Hardline Productions) came and saw me in this show (that was nice of him), and afterwards we talked a lot about one of the First Nations soldiers who was a character in the play.”

“It turns out that Raes and I were taught very little in school about the inclusion of Aboriginal soldiers in the Canadian army. Raes mentioned that his grandfather, a Métis man, had served in the Canadian Expeditionary Forces during the Second World War, and that’s when Raes and I started coming up with the idea that would become Redpatch.”

The title comes from the red patches that were sown onto the left shoulders of each Canadian infantry solider, so that the British officers could distinguish the Canadians from their own soldiers. In 1914, Canada was still a colony belonging the British Empire and the soldiers wore the same uniforms.

Writing the play involved research on the part of the co-writers.

“We simply wanted to know more about this aspect of our Canadian history,” Oliver said. “Raes and I were not history buffs, so we had to go out and learn about Canadian military history. We decided that we wanted to explore the idea of a Métis man fighting during the Great War (the First World War), and we went online and looked in the library, and we tried to find books that would teach us about that specific time in history.”

Oliver hopes that audiences will be able to explore the war from a new perspective, from the perspective of an Indigenous soldier fighting for a colonial army.

The production features six Indigenous actors. Raes Calvert is one of them.

Audience receptions have already been powerful.

“It feels like every show we do, we always have audience members who stick around after the show to share their own stories of family members who have served for Canada in various conflicts,” said Oliver.

Redpatch runs at the Citadel Theatre in Edmonton from Nov. 1 to Nov. 11. For more information about the play, visit http://www.redpatch.ca.