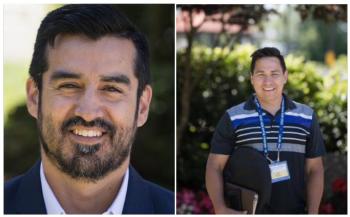 This organization supports First Nation communities keen to gain control over their lands, natural resources and environment through the Framework Agreement on First Nation Land Management passed by Canada’s Parliament in 1999.

Heading into 2020, staff members of the resource centre were planning to produce videos to get their message out about the development of land codes.

The plan was to venture into First Nations that had approved land codes to interview representatives from the communities, then share those videos through the centre’s networks.

But the pandemic, which caused lockdowns, restrictions and health and safety regulations that had to be respected, put a hold on production.

Instead, officials from the centre were able to pivot and place their focus on producing a podcast for messaging.

The result is Land Decolonized, a podcast that had its debut last month. Two episodes have aired with the next expected to be released on Wednesday (Dec. 23).

“I wasn’t expecting the podcast as a forum to resonate so much,” said Meko Nicholas, the executive director of the First Nation Land Management Resource Centre. “With our first podcast we had 1,500 downloads. And then with the second one we had 2,000 (downloads) in one day.”

Veteran journalist Richard Perry, who lives in Antigonish, N.S., is producing the podcast, as well as serving as its host.

“It’s a unique show about the land code becoming so popular in First Nation communities across Canada,” Perry said.

There are 634 First Nations in the country. About one-third of them have either approved a land code, are in a developmental stage or are on a waiting list to work with the resource centre to move things forward.

Louie, an Order of Canada recipient, is the chairman of the Lands Advisory Board, which provides resource materials and training for those First Nations seeking information about the Framework Agreement.

Perry’s guest for the second podcast was Gerry Duquette, the chief of Dokis First Nation in northern Ontario. Duquette is a director of the Land Advisory Board.

John Makson, the senior public relations advisor for the First Nation Land Management Resource Centre, admits his organization would have preferred to put out videos in 2020.

Producing a podcast though was part of the plan. The pandemic forced the podcast to take precedence.

“This was always a bit of our communications strategy,” Makson said. “Information about this is not very abundant. We’ve known about this resource for a while.”

Makson said the pilot series had a couple of intended goals. For starters, it was to bring awareness to the fact the organization will soon hit the 100 mark in terms of First Nation communities across the country that have approved land codes.

The milestone 100th community will be achieved early in 2021.

Makson said that podcasts in the New Year are expected to be rolled out weekly, on Wednesdays, leading up to the centre’s 25th anniversary on Feb. 12.

Though the Framework Agreement was signed on Feb. 12, 1996, it was more than three years after that when legislation was passed.

The Framework Agreement is a deal that was initiated by 14 First Nations. They decided to join forces, opting out of the land management sections of the Indian Act.

That’s because they wanted to take over not only the governance of their nations, but also the management control of their land and natural resources.

When it is safe to do so, Makson said First Nation Land Management Resource Centre officials still plan to visit communities and produce videos to promote their work.

Because of the early success of the Land Decolonized podcast, however, Makson said the plan is to produce even more than the initially scheduled 10 episodes.

That’s because they can be done fairly easily since they are done remotely.

“You can do them over Zoom or over the phone,” Makson said.

Episodes of Land Decolonized can be downloaded here.