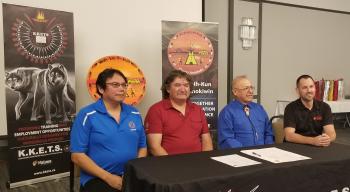 “We want to be in 25, 30 communities in the next 10, 15 years.” — Patrick Casey, executive director of Discovery House
By Sam Laskaris
Local Journalism Initiative Reporter
Windspeaker.com

A Memorandum of Understanding has been signed that could potentially change the living conditions for several Indigenous communities in northern Ontario and then possibly in other provinces as well.

Besides drastically improving the affordability of living in remote communities, the initiative is also expected to provide numerous jobs for community members.

The Wah-Ka-Ih-Kun Mamo Anokiwin initiative, which translates into Working Together to Build a House, was signed this past week in Thunder Bay between representatives from the Kiikenomaga Kikenjigewen Employement and Training Services (KKETS) and Discovery House.

The project will see Indigenous people ages 16 to 30 from the nine Matawa communities in northern Ontario take part in a three-year training program.

These trained individuals will then help build Discovery House units.

Discovery House units, which have been in the design phase for the past decade, are much more than places to live.

They are self-sufficient, net-zero living spaces that will include solar power, geothermal heating and water filtration technology, and a greenhouse where fresh food can be grown for community members.

“They can go in and pop these units into a community and leave,” said Dave Neegan, KKETS’s executive director, of the units.  “But they want to address the issue of capacity building.”

All of the complexes will be energy efficient (in many cases replacing the use of diesel) and be environmentally responsible.

“The whole house is what the government is pushing out, a net zero approach,” Neegan said. “These will leave no carbon footprint whatsoever.”

So far 75 individuals, female and male, have signed up to participate in the construction training program, which is scheduled to begin Nov. 1.

They will be able to attend ‘Smart Classrooms’ that are being installed in Matawa communities to take part in their online learning. High-speed satellite internet is being provided in these classrooms as are large screens and new tablets, which will allow for interactive learning.

A huge plus is that program participants can remain in their communities throughout the training process instead of relocating for their program education.

Part of the training program, however, will involve heading to CFB Borden near Barrie, Ont. to help build a single prototype unit.

The plan is to start building that prototype next spring. But like most other things these days, it depends on the COVID-19 pandemic and health and safety regulations at the time.

Then, in a couple of years, the goal is to start building a 64-unit facility in Eabametoong First Nation, located about 350 kilometres northeast of Thunder Bay.

“The top priority is pushing everything we have with these Matawa communities,” said Patrick Casey, the executive director of Discovery House. “The objective is to do two more phases (in Indigenous communities) in Ontario after that.”

Casey said the long-term plan, however, is to expand and have Discovery House units in Alberta, Quebec and Labrador.

Casey said Discovery House, a company that has its head office in Toronto, spent six years overcoming the technical obstacles that it envisioned would arise with the construction of units. And for the past four years, company representatives have been working on training solutions to make the projects work.

Each unit is expected to provide about 1,700 square feet of living space. But because each facility will also be providing food and be environmentally responsible, Casey said so much more will be gained.

“We do have community support for the project,” he said. “And it’s designed to address critically rampant issues in Indigenous communities like diabetes and cancer.”

Casey also said there is still plenty of education that needs to be done to get people in communities more aware of the benefits of eating fresh products.

“It’s designed to meet the nutritional needs of the community,” he said.

Another plus is community members will not have to pay exorbitant prices in order to have fresh food shipped to them.

Each Discovery House complex is expected to employ 30 people. And each one will be structured as a community-owned, agricultural co-op.

Jobs available at each facility will include ones in construction, maintenance, horticultural and food processing, sales and community outreach.

A manager for each site will also be provided.

The construction program is being funded primarily by the Ministry of Natural Resources Canada.