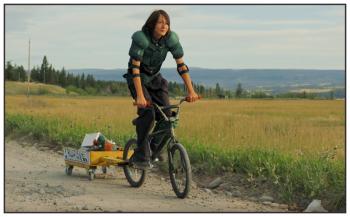 William Magnus Lulua plays the title role of Tyler in the film 'Portraits from a Fire'.

“What this film is about is death and rebirth, and the process of healing. So, in order to truly heal, our previous perception of the truth has to completely crumble.” — Filmmaker Trevor Mack
By Adam Laskaris
Local Journalism Initiative Reporter
Windspeaker.com

Filmmaker Trevor Mack’s debut movie Portraits from a Fire is finally set to be released.

“It's been a massive journey in the making and I'm super grateful that the community, and the people who helped make this film happen and helped manifest it, can now enjoy it together,” Mack told Windspeaker.com.

Filming took place over a two-and-a-half-week period in 2019.

Mack directed and worked on the storyline with Derek Vermillion, while the script was written by Manny Mahal.

Portraits from a Fire was shot in Mack’s own Tl'etinqox (Anaham) First Nation in northern British Columbia. William Magnus Lulua plays the title role of Tyler, a teenage boy who discovers a family secret and begins to see his home life begin to unravel.

“It's essentially a tutorial of how we can heal intergenerational trauma,” Mack said. “What this film is about is death and rebirth, and the process of healing. So, in order to truly heal, our previous perception of the truth has to completely crumble.”

Mack said the creation of an Indigenous mentorship program allowed youth on the reserve to get involved in the film’s creation.

“We had youth from the nation who wanted to take part in making a movie,” Mack said. “They got paid to essentially learn from crew members of the movie.”

Mack said the program was a hit.

“That really inspired me, seeing kids from my nation showing up, sometimes at 4 a.m., sometimes waking up at 2 p.m. to film throughout the night,” Mack said.

“It was hectic as I had no idea what I was doing, but we made it all work because it was our first time.”

The film is set to be released Nov. 1 in select theatres across Canada as part of the Landmark Cinemas Canada Spotlight Series: Waterloo, Orleans, Kanata, and Whitby in Ontario. In Calgary, Edmonton and Winnipeg. And in British Columbia in New Westminster, Kelowna, Nanaimo, and Penticton.

Then it will launch Nov. 9 on demand on all major platforms.

Mack said he intentionally wanted the film to be released following Truth and Reconciliation Day Sept. 30. Mack said his “whole family was taken away” to residential schools, but wanted the film’s message to focus on the healing process.

“Everybody's wearing orange shirts. And we can't let the powers that be to continue for us to be identified with [just being] residential school survivors. Colonial power is still going, and we've gotten through all of it.”

Mack, who was assaulted in downtown Vancouver in 2016 and had to have his jaw wired shut for three months, said the last few years have taught him about how he views himself, as well as the larger Indigenous community.

Mack hopes that Portraits from a Fire can provide a positive experience for the audience.

“We as Indigenous storytellers have the responsibility to create films and stories that show happiness, abundance, and joy for the next generation,” Mack said. “Why would I want my kids to watch movies about the end of the world?”

Mack said he thinks filmmakers have to be careful about the kinds graphic of messages that come across in their films and the long-lasting effects they can have on the viewers.

“Maybe it's not real and it's in a fictional movie, but those images are still being shown back — those literal images and those literal sounds.”

“I mean, yeah. The awards are cool,” Mack said. “But I think what matters to me is getting our people to watch this movie, and think what means more to me is hearing the laughter from our people.”