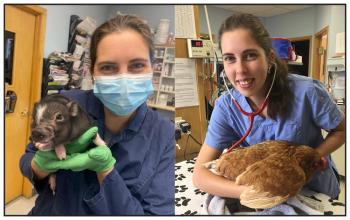 “It shows how Indigenous people have a human-animal bond. So the way they interact with animals is different than a lot of other cultures. I think it is really cool that we have a chance to showcase that…” — Dr. Savannah Howse-Smith
By Crystal St.Pierre
Local Journalism Initiative Reporter
Windspeaker.com

“Bringing women up to the top” is the motivation behind producers Shirley McLean and Tania Koenig-Gauchier’s upcoming docuseries Dr. Savannah: Wild Rose Vet.

The nine-episode series is set to air May 3 in Cree on the Aboriginal Peoples Television Network (APTN) and May 4 in English. It will also be streamed on APTN lumi.

The show follows Dr. Savannah Howse-Smith, a southern Alberta Métis woman, as she cares for a variety of animals through her mixed animal practice, all while she learns more about her heritage.

“With Dr. Savannah, we are showcasing that Indigenous people are more than just our trauma stories,” said McLean. “We’re more than that. A lot of us come from that place, but we can also thrive and survive and we’re flourishing.”

Howse-Smith has been working as a veterinarian for the past nine years, and currently is located at Rocky Rapids Veterinary Service in Drayton Valley, Alta.

She discovered her Métis background while attending veterinarian school.

When the two producers came up with the idea of creating a docuseries about Indigenous veterinarians, they sent out a casting call to the veterinarian colleges across Canada.

“There was a nationwide search and Savanah was just the standout because she was just personable, and witty and loving,” said Koenig-Gauchier. “She had all of these qualities in her and she just really opened herself up in front of the cameras. We knew she was the one.”

The crew travels to locations within Alberta, including the Victoria Settlement Provincial Historic Site in Smokey Lake, to look deeper into Howse’s history. They also travel to places outside of the province, including Cambridge Bay where Howse-Smith provides care to the animals.

The show illustrates how important it is to discover who you are in the present, but also to discover where the drive and inspiration derives from your past.

“Here was an opportunity for me, as a producer, to bring information to the world about the Métis peoples of this country,” said Koenig-Gauchier. “There’s not a lot of content out there where people can learn this. There’s more content out there regarding First nations and Inuit, and this is wonderful, and so now we are bringing Métis content and I think that is so positive.”

“Part of our mandate is to showcase to the world that Indigenous people are ordinary people doing extraordinary things,” said McLean.

One of the projects that Howse-Smith highlights in the series is her volunteer work with the Canadian Animal Task Force that focuses on “helping people helping animals.”

As part of its scope, the group travels to First Nations communities to work with their free-roaming dog population.

“We go to First Nations communities and perform spay and neuter procedures, as well as vaccinations and deworming,” said Howse-Smith. “We have a lot of other supportive programs, like setting up bylaw programs, providing education and community outreach.”

Howse-Smith said she feels this program is very important for the communities she works with and to highlight it on the show. Part of her own mission is to provide viewers with a better understanding about what the beliefs are in Indigenous communities and why free-roaming animals exists.

“It shows how Indigenous people have a human-animal bond,” she said. “So, the way they interact with animals is different than a lot of other cultures. I think it is really cool that we have a chance to showcase that and show it. It gives a bit of a platform for people from those communities to talk about the animals that they really love and then show how they care (for them). It’s an idea that these animals are living more so in a way that is respectful of their nature, who they are as animals.”

With a desire to help — whether it’s the broken wing of an owl, a dog that swallowed a toy or a horse that needs dental work — Howse-Smith offers her skills to all animals, domestic and wild.

“The variety is key and that’s what I really like. To see something different every day. It keeps it interesting,” Howse-Smith said.