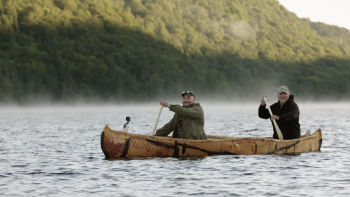 Wendell G. Collier has a real connection to the location of his latest short documentary series.

A three-part series titled Mi’kma’ki will debut and begin streaming on CBC Gem this Friday, Aug. 19.

The collection of short films – each one 22 minutes in length – is based on various Indigenous experiences in communities in Newfoundland and Labrador.

All of Collier’s episodes from that series were filmed in Ontario.

CBC officials later approached him to see if he would be keen to make another documentary series, this time about his home province.

“Being from Newfoundland and Labrador I said ‘of course’. Why wouldn’t I?”

The first episode of Mi’kma’ki is titled “Gwitna’q”, which means 'travel by canoe' in English.

This short focuses on Miawpukek First Nation, which is located on the south coast of Newfoundland. Collier is a member of the Nation.

The episode is centred on Miawpukek members who, in the past couple of decades, revived the tradition of their ancestors of building birchbark canoes, not only as a means of connecting with their past, but also to ensure their cultural survival.

“It’s a really nice representation of the work that community has done to revive the tradition,” said Collier, adding he is partial to that episode as it features his own Nation.

The second episode of Mi’kma’ki is called “niKet”, which translates into food. This short focuses on Indigenous research partners who join forces to study the threat to food security and food sovereignty in Nain, a town which is the northernmost permanent settlement in the province.

And the third Mu’kma’ki short is titled “Npisun”, meaning medicine. This episode centres on three friends in the western portions of the province who share their knowledge of medicine and the different forms it comes in.

Collier said his crew faced a significant challenge while filming “Npisun” as Hurricane Larry made landfall in the province last September, four days into production. That necessitated switching up some filming dates.

The hurricane was originally listed as a major Category 3, but was downgraded to Category 1 by the time it hit Newfoundland and Labrador. It still caused significant damage in the province, but Collier’s crew ended up completing all filming for the episode.

Prior to filming each short, Collier said his crew had consultation meetings with the chief and council members and Elders from each community to ensure proper protocols would be followed.

All of the communities Collier filmed in were very receptive and were keen to get their stories out.

Proof that protocols were followed was evident during the filming of “Npisun”, when Collier’s crew was asked to turn off cameras and not film during a sacred ceremony.

Collier was asked what he hopes the series takeaway will be.

“I hope it inspires people to learn more about the Indigenous cultures that do exist on Newfoundland and Labrador,” he said.

Though dates have yet to be announced, Collier anticipates the series will not only be streamed, but will be broadcast on television in Atlantic Canada starting next month.

All three episodes are narrated by shalan joudry, a Mi’kmaw artist who has worked in various mediums, including as an actor, poet, playwright, podcast producer, oral storyteller and cultural interpreter.

Collier said it was a perfect fit that joudry was the series narrator, not only because she is Mi’kmaw but because it’s also his mandate to include as many Indigenous people as possible in his work.

“I shared with her a couple of early edits and she was super excited to come on board and lend her voice,” Collier said.

Collier has more than 15 years of experience in the digital media world and broadcast television. He fronts his company called Wanderer Entertainment Inc.

Mi’kma’ki will be available to stream for free starting Friday at https://gem.cbc.ca/