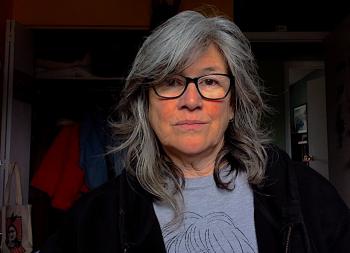 Yvette Nolan, writer with the audio series “Dialogues for the vaccine hesitant… and those who love them”

Yvette Nolan is one of four writers contributing to Dialogues for the vaccine hesitant… and those who love them series run by Boca del Lupo in partnership with the Dr. Peter Centre, an HIV-focused foundation.

The series launches for free on podcast platforms on Dec. 14, and can be accessed through bocadellupo.com/dialogues/.

Nolan, who was born in Saskatchewan to an Algonquin mother and an Irish immigrant father, contributed a fictional conversation titled “The Case of You”.

“We've worked really hard to have the kids not be scared of vaccination so that when they were able to get the jab, it would be an easy choice,” a woman tells her sister. “Have you not been watching the news? Seeing all the people who are now in intensive care with COVID saying they regret not having the vaccine when they could?”

While the conversation is fictional, Nolan said it’s one that could resonate with listeners due to similar experiences they may have had with their own friends and family members, particularly around the holiday season.

“I think what people can expect listening to it is like, ‘Oh, no, that’s just like my dad’, or ‘Oh, god that's just like my sister or my cousin’, whoever the vaccine hesitant is in their life,” Nolan said in an interview with Windspeaker.com.

Nolan says that while some reasons for not getting vaccinated, like conspiracy theories around being implanted with microchips, are easy to dismiss, it can be “exhausting” to fight misinformation.

“The story starts with not hugging, because one of them says ‘I don't hug non-vaccinated people.’ And it ends with an air hug,” Nolan said. “These people have come to some sort of reconciliation about the conflict. But not an easy answer.”

“I think the vaccine hesitant are running out of excuses,” Nolan said, saying both in the interview and in “The Case of You” that enough time has passed to notice that the vast majority of vaccinated people have had no long-term side effects as a result of their shot. “I'm afraid that maybe [unvaccinated people’s views] become more entrenched in the last year. I worry that now the people who are not getting vaccinated are kind of not getting vaccinated just because that's the position they've taken. And they're not actually having the discussions [around the topic.]”

Nolan does understand why some Indigenous people and other racialized groups may be initially hesitant of a government-run program.

“There's no reason for us to trust the government, is there?” Nolan said. “But in this case, it becomes a bigger thing… It speaks to a much longer dysfunction that you know, now the chickens are coming home to roost, like, [the government] didn't bother to keep our trust. And now, this is how it pays forward.”

Nolan hopes that her work will help those struggling to find the words when talking to unvaccinated family members.

Having worked as a playwright for three decades, Nolan sees her most recent project as a bit of a full-circle moment.

The audio series has been lauded by those at the Dr. Peter Centre as a key tool to help fight vaccine misinformation.

“The tools will help all of us, whether we are on the front lines of the public health crisis or heading to a dinner with family and friends,” said Scott Elliott, the executive director of Dr. Peter Centre.

“With so much divide that has occurred over the past two years, we are grateful to be in partnership with Boca who has used funds from the vaccine microgrant program to build a project designed to bring us back together.”