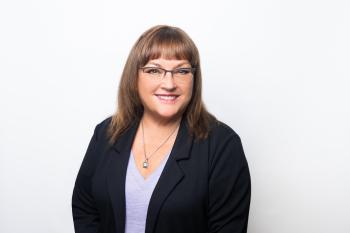 “I have found Indigenous people and Elders to be so open when they’re approached in a good way. I don’t assume that I know anything, frankly, and it starts with an open conversation.” — Terri Pelton, Alberta’s new Child and Youth Advocate
By Shari Narine
Local Journalism Initiative Reporter
Windspeaker.com

Alberta’s new child and youth advocate is looking to support Indigenous communities that want to exercise jurisdiction over their children.

“I really do see that as a priority for this office, that I need to get out to First Nations and Métis communities and speak with leadership on how we can support them with their inherent rights to take care of their kids,” said Terri Pelton.

In 2019, the federal government passed legislation that opened the door to First Nations, Inuit, and Métis taking control of their children, youth and families.

On April 5, Pelton was sworn in as Alberta’s new advocate, becoming the first woman to be appointed to the five-year term since the office was created in 1989. She’s the second person to hold the position since the advocate became independent in 2012.

“I’m not sure what that difference is going to be but I think … women maneuver life a little bit differently than men,” she said.

Unlike her predecessor Del Graff, who held the position for 11 years and is Métis, Pelton is not Indigenous.

Alberta is in the process of following in the footsteps of child and youth advocate offices in British Columbia and Manitoba, which recently hired Indigenous knowledge keepers.

A knowledge keeper will “help influence staff across the office and that person is going to be part of our strategic leadership team,” said Pelton.

Pelton, who has worked in the social services sector for more than 35 years and with the Office of the Child and Youth Advocate (OCYA) since 2007, says as long as she has been involved, there has been an over-representation of Indigenous children in the system.

Graff’s final report, which was tabled in March, is a stark indication of that over-representation. Eleven of the 15 youth, whose deaths were investigated through mandatory reviews, were Indigenous. These deaths occurred between Aprril 1 and Sept. 30, 2021, while youth were either in care or within two years of being in care.

Pelton acknowledges the ongoing battle Graff fought with the provincial government to implement his recommendations. Investigations and special reports often highlighted the same or similar calls to action.

While Pelton says her tendency is to work collaboratively, she believes she is “going to have to follow in Del’s footsteps and continue to push at every opportunity” for public accountability on recommendations that come from her office.

“I’m not going to be a wallflower. I will stand up for kids,” she said.

Presently, the ministries impacted by the recommendations—usually children’s services, justice and solicitor general, community and social services, education, and health—have 75 days to respond to the OCYA, “but it really needs to be a public accountability so I’ll be talking to the ministries about that,” said Pelton.

The next six-month report, to be released at the end of September, is likely to contain the investigations into 16 deaths, primarily youth between the ages of 16 and 22 years.

“I’m really concerned about these numbers of deaths we’re seeing,” said Pelton. “How does government support (the youth) differently so we don’t see these tragic outcomes?”

Opioids continue to be a challenge.

The last investigative review done by the OCYA was released in June 2021 and was a follow-up on a 2018 report on youth opioid use in Alberta. The most recent report examined the timeframe of June 26, 2018 to March 31, 2021, with 22 opioid-related deaths of youth in care or within two years of care. Twelve of these youth were Indigenous.

“I think I really have to push for a provincial opioid strategy. The number of—just not young people, but people in general—dying from these horrible drugs, it needs to be some kind of coordinated effort to address it. I’m very, very worried about that,” said Pelton.

Also high on her priority list is “keeping young people at the centre of the conversation.”

She’s hoping to accomplish this, in part, by giving the existing youth council a stronger role and increasing their voice in the office. Last year the youth council went from staff working with them “off-the-side-of-their-desk” to warranting a full-time manager. A recent youth forum led by the youth reinforced Pelton’s belief that “young people have a lot to offer and we really need to listen to them more.”

Among the topics broached were youth homelessness, an issue that Pelton didn’t realize the depth of, and individual and collective rights of youth.

“We’ve been doing more of the collective rights in the last three or four years,” said Pelton.

Historically, the focus has been on individual rights and individual voices, but Pelton wants to continue the shift to collective rights “so young people can have it all.”

She wants to see them connected to their extended families and communities. Collective rights, she says, exposes them to their cultural identity and their history.

“I don’t want us to be seen as one-sided, the advocates coming out (to communities) and they’re not listening to why it’s important for young people to be connected to who they are and so that has probably been our biggest evolution and it will continue to be an evolution for us,” said Pelton.

Along with making the downtown Edmonton office more youth friendly, and repurposing some space for the youth council, Pelton also wants to create a welcoming space for Elders and knowledge keepers, including a ceremonial room for smudging.

Pelton is proud of the work she has done over the years, pointing out she was part of the strategic leadership team that helped set the priorities and mission.

“I’m not going to make a 180 (degree turn) but I might go a little more southeast,” said Pelton about the minor directional shift she hopes to take the office in.