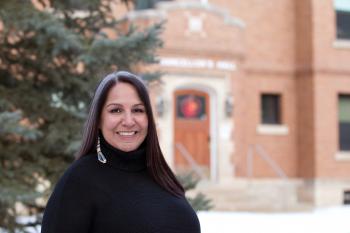 “Stephanie has so much practical experience, not only as manager of statement gathering for the TRC, but also through her lived experience as a Sixties Scoop survivor.” — Eugene Arcand, Survivor Circle member, National Centre for Truth and Reconciliation
By Sam Laskaris
Local Journalism Initiative Reporter
Windspeaker.com

A search was conducted across the country and, at its end, officials with the National Centre for Truth and Reconciliation (NCTR) concluded its next executive director is the one that had been serving in the role on an interim basis since last October—Stephanie Scott.

The NCTR, established in 2015, is located on the University of Manitoba campus in Winnipeg. The centre was created to forever preserve the memories of the residential school system in Canada.

The facility is housing the statements, documents and other materials that were gathered by the Truth and Reconciliation Commission of Canada (TRC).

The TRC was established in June 2008 to document the history and legacy of the Indian residential school system.

The TRC officially concluded in late 2015, issuing a final report and 94 Calls to Action to move Canada towards reconciliation with Indigenous peoples.

Scott has worked at the NCTR since 2016 and was its director of operations before becoming the interim executive director. She joined the NCTR after working as the TRC’s manager of statement gathering.

“I’m truly honoured,” she said of being named to the role. “I believe it’s a gift to be able to do this and work with the survivors.”

Scott said it was not a given she would step into the executive director role, but Cynthia Wesley-Esquimaux, the chair of the NCTR, said Scott was indeed a frontrunner for the job.

“Stephanie has been a valuable member of our team since she joined us in 2016,” she said.  “She is committed to hearing from Indian residential school survivors and applying that knowledge with care. She was the clear choice for executive director.”

Scott is a Sixties Scoop survivor. Because of Scott’s own past and previous work experience, Eugene Arcand, a member of the NCTR’s Survivor Circle, also believes she is a perfect fit for the executive director title.

“Reconciliation must include restoring traditional leadership roles of Indigenous women,” said Arcand, a member of Muskeg Lake First Nation in Saskatchewan. “Stephanie has so much practical experience, not only as manager of statement gathering for the TRC, but also through her lived experience as a Sixties Scoop survivor. Her strength is evident as is her passion to elevate the truth of what happened to Indigenous children and families through the residential school system.”

Arcand spent a total of 11 years in that system at a pair of Saskatchewan residential schools. He was at the St. Michael Indian Residential School in Duck Lake for nine years. And he attended the St. Paul’s Lebret Students Residence for two years.

Scott is taking over as the NCTR’s executive director as a new era is beginning for the organization. It will soon launch new research and digitization ventures.

Thanks to a $6 million Canada Foundation for Innovation grant, the NCTR will be able to start making plans for a new archives building as well as developing a searchable database.

Part of the work will include starting Phase 2 of the NCTR’s Missing Children Project, launched in 2019.

Scott said there are currently more than 4,000 children on the missing registry list. New funding will enable the centre to hire researchers to help identify as many of the children as possible who lost their lives while in the residential school system.

Scott is pleased with the federal grant as it will enable the NCTR to further its work. This will include providing better access to records for survivors and their family members.

Scott, who is in her 50s, is uncertain whether full reconciliation will be achieved during her lifetime.

“We have decades of work to go,” she said.

Scott believes some progress has been made since the TRC wrapped up its findings.

“I see small changes,” she said. “A lot of work is being done at community and grassroots levels.”

“They were alarmed and concerned that work is moving along slowly,” Scott said.

While pleased with the $6 million grant to cover work during the next three years, Scott said NCTR officials are keen to obtain further assistance from the Canadian government.

“We also want to secure permanent federal funding,” she said.