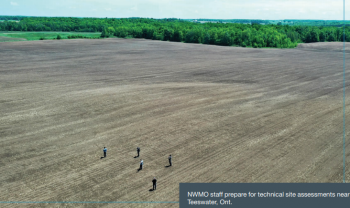 ...it’s not necessarily a yes or no answer. We need to find a solution for the waste. If this isn’t it, then what is it?” — Brittany Jones, energy associate, environment office of the Saugeen Ojibway Nation
By Shari Narine
Local Journalism Initiative Reporter
Windspeaker.com

The Saugeen Ojibway Nation (SON) in Ontario is considering a proposal for a deep geological repository for nuclear waste storage after having said no to something similar last year.

Now, however, SON is considering a proposal made by the Nuclear Waste Management Organization (NWMO) to store high level nuclear waste in a DGR. A DGR is developed in a “suitable rock formation to safely contain and isolate used nuclear fuel,” according to the NWMO.

“We have to consult on every project so we can’t just say ‘because we already said no to (OPG), we can’t consult with you’ because that duty goes both ways,” said Brittany Jones, energy associate in SON’s environment office.

While similarities do exist between the projects, including their location in Anishnaabekiing (SON’s territory), they are immensely different and one of those differences comes in consultation, which has been a “fairly large issue with our community,” said Jones.

The OPG proposal was defeated by 1,058 of 1,232 voting SON members. Then-Anishnabek Nation Grand Council Chief Glen Hare said it was “a wake-up call to consult with people.”

The OPG-owned Bruce power plant has been in Anishnaabekiing for more than 50 years. There was no input from SON when the plant was built. Engagement sessions with SON communities on OPG’s proposed DGR didn’t take place until 2019.

OPG honoured the commitment it made in 2013 not to proceed with the project without SON’s consent.

It’s been a different situation with NWMO, with the project to be located in South Bruce near the Teeswater River.

“The Nuclear Waste Management Organization believes that Indigenous people have a really integral and important role to play. These kinds of projects cannot proceed without having Indigenous support and we have a reconciliation policy at NWMO,” said Karine Glenn, strategic project director at NWMO.

“We’ve been in talks with NWMO quite a few years now. … A couple years ago we signed an actual agreement with them to begin the work. But we’ve known that the project was coming up for quite some time,” said Jones.

The NWMO began its site selection process for the storage of high-level nuclear waste with 22 sites.  The selection has been narrowed down to two sites in Ontario, with the other being in Ignace.

“For those two sites, the principles on which the nuclear waste management is basing its whole project on is to sign a site with suitable geology and willing host community. The project will not proceed if communities in the area are not willing to host a project. We still haven't done a determination of willingness,” said Glenn.

Shutdowns caused by measures to control the coronavirus pandemic and “online burnout” has hampered community engagement, says Jones, even though the process officially began a couple years ago.

Jones says her role is not to tell the community how to vote, but to work in partnership with NWMO to present information to the community so members can make an informed decision. NWMO is present at community engagement sessions in order to answer the “high level technical questions.” Independent neutral experts also take part.

While the South Bruce municipality is also holding community engagement sessions, Jones says SON sees value in hosting its own sessions. She points out that SON did not approve the OPG project but South Bruce residents did.

“Indigenous people and the people from our communities, always our main concern’s the water and the land. Our people haven’t been swayed by money and things like that in the past,” she said.

“The communities are really digging down on the willingness side of things right now. Site selection isn't until late 2023 (so) there’s quite a bit of time yet for the communities to come to a decision,” said Jonathan Zettel, NWMO regional communications manager for southern Ontario.

Zettel is confident that at least one of the two sites will get full community support.

“But we still are early in the stage. Right now we're just hopeful that's going to be the case. Once we present the safety case, and just how safe the DGR—the solution for this waste— is, people will start to see that's an environmental plus. It’s something to actually get excited about,” he said.

Jones is hopeful all the information about the NWMO’s proposal can be provided to SON members within a year. No date has been set for a vote.

“What we’ve said to our communities and the conclusion we’ve come up to is, if you don’t want to support the DGR that’s fine, that’s our decision, but it’s not necessarily a yes or no answer. We need to find a solution for the waste. If this isn’t it, then what is it?” said Jones, who adds that high-level nuclear waste will continue to be created.

As for discussions held by chiefs’ organizations, both provincially and nationally, opposing small nuclear reactor development and the storage of nuclear waste underground, Jones says leadership is firm on how SON is proceeding.

“I know that there have been resolutions like that on the floor at (the Assembly of First Nations) meetings, at Chiefs of Ontario meetings, and we’ve let them know that this is our process and this is how we’re going to make the decision,” she said.

If the vote is unfavourable, Glenn says NWMO has committed to not go ahead with the project.

Economic benefits to the DGR have yet to be discussed, says Jones, and she doesn’t expect that to happen until after a “yes” vote.

However, figures offered by NWMO include $21 billion in infrastructure costs over a 150-year timeframe. During the construction phase 1,100 jobs are expected to be created. During the operations phase, that number is expected to jump to 1,300 jobs.

“I do believe that (NWMO) will have to hold a certain percentage of positions for SON members or Indigenous people,” said Jones.

She also points out that the protocol agreement with NWMO had “funds attached for certain positions” that have already been created within the environment office. If the proposal is approved, she expects even more jobs to be created in her office.