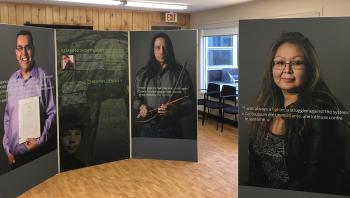 “It is only by confronting and understanding this history that we can move forward and heal together.” — Leela Sharon Aheer, minister of Culture, Multiculturalism and Status of Women.

The Bi-Giwen: Coming Home – Truth Telling from the Sixties Scoop exhibit will be on display at the Royal Alberta Museum from Monday, June 17 to Friday, June 21 (National Indigenous Day).

The first-of-its-kind exhibit shares the experiences of Sixties Scoop survivors, and includes 12 personal testimonials of strength and resilience.

The Sixties Scoop refers to government practices across Canada from the 1950s to the 1980s that led to First Nations, Métis and Inuit children taken from their parents, families and communities by child intervention services and placed in non-Indigenous families. Many of these children experienced abuse, mistreatment and neglect and lost touch with their families, communities, culture and traditional language.

“The exhibit is an opportunity to share and educate Albertans about the history of Canada’s Indigenous people in relation to the Sixties Scoop,” said. Adam North Peigan, president, Sixties Scoop Indigenous Society of Alberta (SSISA).

“It is only by confronting and understanding this history that we can move forward and heal together,” said Leela Sharon Aheer, minister of Culture, Multiculturalism and Status of Women.

Between January and March 2018, the Government of Alberta worked with SSISA to conduct engagement sessions across Alberta. The sessions provided an opportunity to listen to survivors and empower them in a respectful and inclusive engagement, which informed the Premier’s apology for Alberta’s part in the practise and policies of removing children.