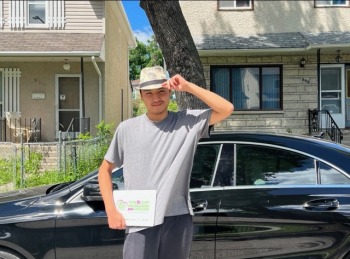 National winner of Your Voice is Power competition Bryce Watt.

“I’m really impressed by your work and your ability to include the history of Indigenous people in Canada through your remix and I’m very honoured to have been able to lend my music to the experience as well.” — Indigenous singer/song writer Jayli Wolf in a video message to winner Bryce Watt
By Sam Laskaris
Local Journalism Initiative Reporter
Windspeaker.com

A pair of teenagers are the winners of a national Indigenous music remix competition.

Bryce Watt, a recent high school graduate from Technical Vocational High School in Winnipeg, and Miyuki Dryer, a student at Toronto’s College Francais, both won $5,000 scholarships from the nationwide Your Voice is Power competition.

High school students from across the country were eligible to enter the contest. They were required to submit entries that featured their computer coding skills to remix music from some established Indigenous musicians from Canada.

The program taught coding skills to high school students while engaging them in various Indigenous-themed issues, including residential schools, the Sixties Scoop and the Truth and Reconciliation Commission’s 94 Calls to Action.

Teachers from across the country were urged to encourage their students to participate in the contest. Some instructors went a step further, making it mandatory for all their students to take part in the program as part of their coding courses.

Watt, who is Cree and a member of God’s Lake Narrows First Nation in Manitoba, submitted an entry that was inspired by his own experiences with racial injustice.

Watt, who is now 18, said he was taken from his mother when he was a young child because of her substance abuse.

Watt recalled that his mother was also turned away at a hospital when she sought help for her drug problems.

Watt was obviously pleased his entry was one of the two winning submissions nationally.

“The only thing I wasn’t satisfied with was I had a way I wanted it to sound in my head,” he said. “When you set the tempo in real time, my verses were slowed down by the tempo.”

Though he has completed his high school studies now, Watt will return to Technical Vocational High School. That’s because it also offers post high school skills and trades programs.

Watt will take a one-year program as he works towards his goal of becoming an electrician.

“I will have other ways of making music,” he said.

Jayli Wolf, an Indigenous singer/songwriter who was born in Creston, B.C., sent congratulatory video messages to both Watt and Dryer.

“The judges selected your remix based on the quality of music and coding, as well as your inclusion of social justice themes,” Wolf said in her message to Watt. “I’m really impressed by your work and your ability to include the history of Indigenous people in Canada through your remix and I’m very honoured to have been able to lend my music to the experience as well.”

Wolf also said she’s keen to have Watt continue on with his musical interests.

“You have such a bright future ahead of you,” she said. “Please keep up the amazing work and keep inspiring others.”

Dryer, who recently completed her Grade 10 studies at her French-speaking high school, found out about her contest win in a rather unusual manner.

The principal and staff from her school invited her to come to the school in late June. Dryer thought she was simply coming to the school to pick up her report card.

Instead, Dryer’s parents and friends had assembled for a celebration of her contest win. And she was shown the video from Wolf praising her efforts.

“It was amazing,” Dryer said. “I was taken aback.”

Dryer said it was mandatory for those in her coding class, which included Grade 9 and 10 students, to complete the project. Students then had the option if they wanted to enter their work in the Your Voice is Power contest.

“I submitted it not thinking anything of it,” Dryer said, adding she didn’t believe her entry had the potential to win the national contest. “I wasn’t expecting it at all. It was overwhelming.”

Dryer used excerpts from a song titled “Freedom” by Indigenous musician Dakota Bear for her entry. The song calls for immediate action in Canada to address racial inequality.

Dryer’s goal with her entry was to raise awareness of the realities faced by people from racial minority groups and to convey an important message about inequity towards Indigenous peoples.

“I’m hoping when they listen to it, they can be made aware of the injustices Indigenous people have lived,” Dryer said of her contest submission.

Dryer herself is not Indigenous. Her father has Scottish ancestry while her mother has some Japanese ancestry.

“I think I want to go into some type of engineering program,” she said.

Your Voice is Power was sponsored by Amazon Future Engineer, a program that works to close the opportunity gap for underrepresented students in technology, in partnership with TakingITGlobal, a youth empowerment charity.

Christine M’Lot, an Indigenous teacher in Winnipeg, developed the Your Voice is Power curriculum in partnership with the Cloud Innovation Centre at the University of British Columbia.