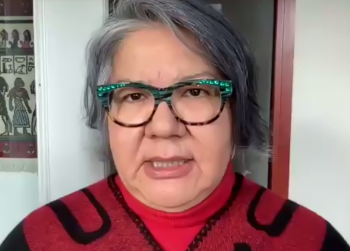 “Over 100 years of church efforts have resulted in the destruction of the social fabric of First Nations. Now equal time and energy and resources must be made available to rebuild our children’s lives, our families and our communities.” —Assembly of First Nations National Chief RoseAnne Archibald
By Sam Laskaris
Local Journalism Initiative Reporter
Windspeaker.com

Assembly of First Nations National Chief RoseAnne Archibald believes the path to reconciliation will continue to be a lengthy one requiring the support of countless Canadians.

Archibald delivered this message during her keynote address this past Friday, Feb. 11 at the 46th annual Elders and Traditional Peoples Gathering.

The three-day virtual event, which wrapped up Sunday Feb. 13, was hosted by the First Peoples House of Learning and the Chanie Wenjack School for Indigenous Studies at Trent University located in Peterborough, Ont.

The theme of this year’s gathering was Reconciliation through Restor(y)ing Our Truth.

“To me that’s restoring truth but also restorying it,” Archibald said early in her address.

Archibald said she has spoken recently about how the country’s true history is being unraveled.

“You might have heard me talk about this as we continue to go through a very difficult time across Turtle Island,” she said. “And the truth and story of Canada is coming to light. The myths of Canada as a friendly, just and fair society has been exposed as false. There must be truth before reconciliation. In fact, there can only be reconciliation if there is truth. And without it, it can’t exist.”

Prior to Archibald’s keynote address, various speakers and non-Indigenous dignitaries spoke about different protests being staged across Canada in recent weeks.

“I wanted to lend my support to those comments that this just and fair society is also being exposed as being non-existing,” the national chief said. “And many speakers talked about how if these were Indigenous-led protests, so to speak, we’d be looking at a very different picture. In fact, we did look at a very different picture just before Christmas in Wet’suwet’en with violent arrests with not only First Nations people but also with journalists who were there covering the story.”

Archibald said it is evident there is a double standard in Canada.

Archibald said it is clear Indigenous people are treated differently than other Canadians by government officials.

Archibald believes there are ways for others to offer their support to Indigenous people.

“Our allies across this country must voice their opinions,” she said. “They must call their MPs and their MPPs and say there is a great injustice happening in this country for Indigenous people and BIPOC people in how they’re treated and what are you going to do about it.”

“This has been a challenging year for many,” she said. “We’ve been navigating a pandemic, we’ve had wildfires, record heatwaves and we’ve collectively been grieving the little ones who did not make it home from what I call the institutions of assimilation and genocide. I don’t call them residential schools. I don’t call them schools because I attended many schools in municipalities and not one of them had unmarked graves with children’s bodies. Not one of them.”

Archibald is confident, however, that better days can be ahead.

This path forward includes a Canadian contingent, including Indigenous leaders and dignitaries and residential school survivors, which will travel to the Vatican to visit with Pope Francis.

This trip had originally been scheduled for January but was postponed due to the ongoing pandemic. It is now confirmed for the week of March 28.

Pope Francis has also announced he would travel to North America at some point in 2022 to meet with survivors and intergenerational trauma survivors.

“Over 100 years of church efforts have resulted in the destruction of the social fabric of First Nations,” Archibald said. “Now equal time and energy and resources must be made available to rebuild our children’s lives, our families and our communities.”

During her address, Archibald also touched on her continual promotion of women in leadership as a way to balance existing political systems.

“Colonization has kept women out of leadership positions for far too long,” she said. “And it’s gatherings like this that give us an opportunity to reflect on picking up healthy and helpful cultural traditions of our people, which includes the important role that women play in the well-being of our Nations.”