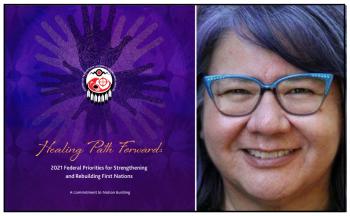 “I commit to working with all parties after the election to ensure that Canada does all that it can to help us to heal and create stronger First Nations, justice, equality and equity which will lead to a stronger Canada for us all.” — Assembly of First Nations National Chief RoseAnne Archibald
By Shari Narine
Local Journalism Initiative Reporter
Windspeaker.com

Now that the Assembly of First Nations has officially made its top concerns known for the federal election, National Chief RoseAnne Archibald is expecting to hear from all the political parties and leaders on how they will move forward to address the issues.

Archibald launched the AFN’s The Healing Path Forward: 2021 Federal Election Priorities for First Nations and Canada platform during a Zoom conference Tuesday morning.  The document, which outlines the areas in need of strengthening, rebuilding and healing, comes out about halfway through the federal election campaign.

“These five priorities offer a strategic direction toward positive and evolutionary change for First Nations and all Canadians,” said Archibald.

“We can get there by working together. That means creating a unified effort on longstanding issues that First Nations have faced; reflecting a shared vision and expression of First Nations’ collective priorities at a national level; seeking a federal government willing, ready and committed to working with our leadership to strengthen and rebuild First Nations which will lead to a stronger Canada.”

Archibald said they will be calling for “strong action” to address the first priority, which focuses on the unmarked graves located on former residential school grounds.

She said the burial sites have “heightened the awareness of Canadians” to the genocide faced by First Nations people and the healing that is necessary.

She also called on an investment in a healing foundation for survivors and intergenerational survivors.

The first priority also calls for Canada’s full commitment to implement the 94 Calls to Action as outlined by the Truth and Reconciliation Commission of Canada which spent six years hearing from witnesses about their experience with and the legacy of the residential school system.

The second priority focuses on climate change and the need for Canada to “rebalance the relationship with all of creation,” said Archibald, including committing to reducing carbon emissions.

In 2019, Chiefs recognized that “…climate change constitutes a state of emergency for our lands, waters, animals, and peoples.” Archibald called for the development of an AFN National Climate Strategy that would place First Nations leadership as the “cornerstone” of any government of Canada climate plan.

The coronavirus pandemic, said Archibald, hit the most vulnerable the hardest and underscored the need for economic growth, the third priority. The document says First Nations governments “require the fiscal capacity to exercise their jurisdiction, rights and title, to improve the quality of programs and services offered to their citizens, to improve governance systems that help ensure the most effective use of the fiscal capacity that does exist, and to close the gap in socio-economic outcomes between First Nations citizens and others in Canada.”

Archibald said land rights and title, water rights and inherent and treaty rights needed to be respected, implemented and honoured by all levels of government, which was part of the fourth priority to promote peace by respecting First Nations jurisdiction. This priority also calls for “providing justice for First Nations citizens both within Canada’s legal framework and through the recognition of First Nations laws.”

The final priority calls for Canada to redesign its legal framework to allow for First Nations to assert its jurisdiction over programs and services, such as the 2019 federal legislation that was passed for child and family welfare and Indigenous languages.

“The pandemic has made it evident that First Nations need more control over their health care to better serve our populations and to eliminate the systemic racism facing our peoples within the medical system,” said Archibald.

She also called on the next federal government to work with First Nations in implementing their jurisdiction through the new United Nations Declaration on the Rights of Indigenous Peoples legislation.

While the election campaign has been relatively quiet on Indigenous issues to date, Archibald said now that the AFN’s platform has been released she expects responses.

Archibald also stressed the need to keep not only unmarked graves at the forefront of the election campaign but also the recognition that First Nations children are still “victims” of poor education, poor housing, limited opportunities and the child welfare system.

Archibald will not be endorsing any candidate or party because she says her position requires her to remain neutral, but she applauded the Indigenous candidates and encouraged First Nations people to vote.

According to AFN numbers, there are 50 Indigenous candidates with just under half, at 24, being First Nations.

“I commit to working with all parties after the election to ensure that Canada does all that it can to help us to heal and create stronger First Nations, justice, equality and equity which will lead to a stronger Canada for us all,” she said.

To read the AFN’s platform, check it out at https://www.afn.ca/the-healing-path-forward/.