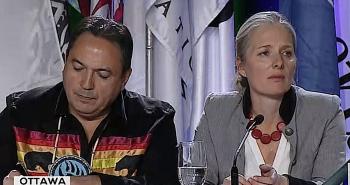 “Indigenous knowledge has to be front and centre when it comes to those solutions.” —Minister Catherine McKenna
By Shari Narine
Windspeaker.com Contributor
OTTAWA 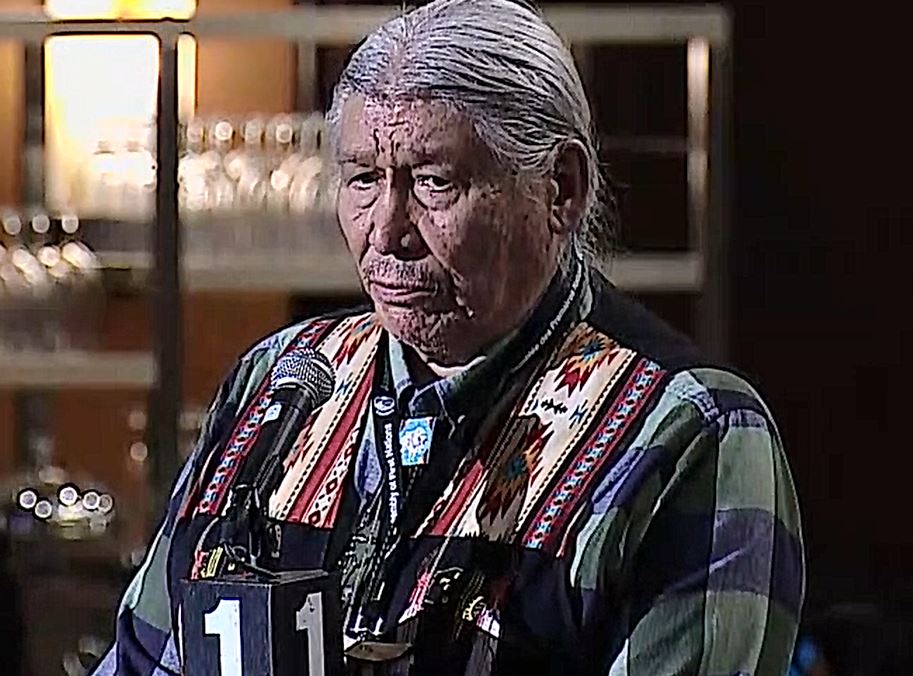 “Canada has pushed very hard for the Indigenous peoples’ platform,” said McKenna Dec. 5 at the Special Chiefs Assembly hosted by the AFN in Ottawa.

She said that Canada held strong in Paris during climate change discussions in 2015 to include Indigenous peoples at the table and to ensure the recognition of Indigenous peoples, their rights and their knowledge in the Paris Agreement.

McKenna said the Paris Agreement framework included an Indigenous representative and she announced the federal government would be funding that position.

“It demonstrates the importance of having Indigenous peoples at the table,” she said.

She pointed out that Indigenous people feel the impacts of climate change more deeply than other Canadians and “Indigenous knowledge has to be front and centre when it comes to those solutions” in addressing climate change and how to adapt.

“This is a big issue, not only in Canada, but throughout the world,” said National Chief Perry Bellegarde in his opening address on Tuesday. “If we can look at policy and legislation and incorporate (the Indigenous) worldview, you’re going to get better decisions.

“Go back to Paris a few years back,” he said. “If we do not stop the warming of the climate by two degrees, it’s past the point of no return. The oceans are warming. Permafrost is starting to melt. You see the fires, you see the floods, you see the big winds. It’s all our Elders’ predictions and warnings coming true.”

Bellegarde agreed that First Nations are the first to feel the effect of climate destruction, as he referred to climate impacts. “You have ice roads that aren’t thick anymore… the animals are all changing their behaviour.”

McKenna stressed the connection between environment and economics. Bellegarde also touched on this in his opening day speech.

“We get the arguments between the environment and the economy and finding the balance between the two. And that we have to have sustainable economic development strategies,” said Bellegarde.

He urged people and companies to start using the three P-model. “To not only look at profit, but look at planet and look at the impacts on people. To incorporate the three Ps in your business planning model, so whatever you do has impact on the planet, and it has impact on people… yes, you’ve got to make money. We all get that. But a lot of people say ‘you can’t eat money’.”

McKenna pointed to Bill C-69, which is now in the Senate for approval. That bill sets out, among other points, ways in which industry must include Indigenous peoples in the processes at the start of major projects. It was created, she said, with input from the AFN and First Nations. She noted her appreciation of Alberta First Nations chiefs who supported the bill.

Working together was also the message of Minister of Employment, Workforce Development and Labour Patricia Hajdu. 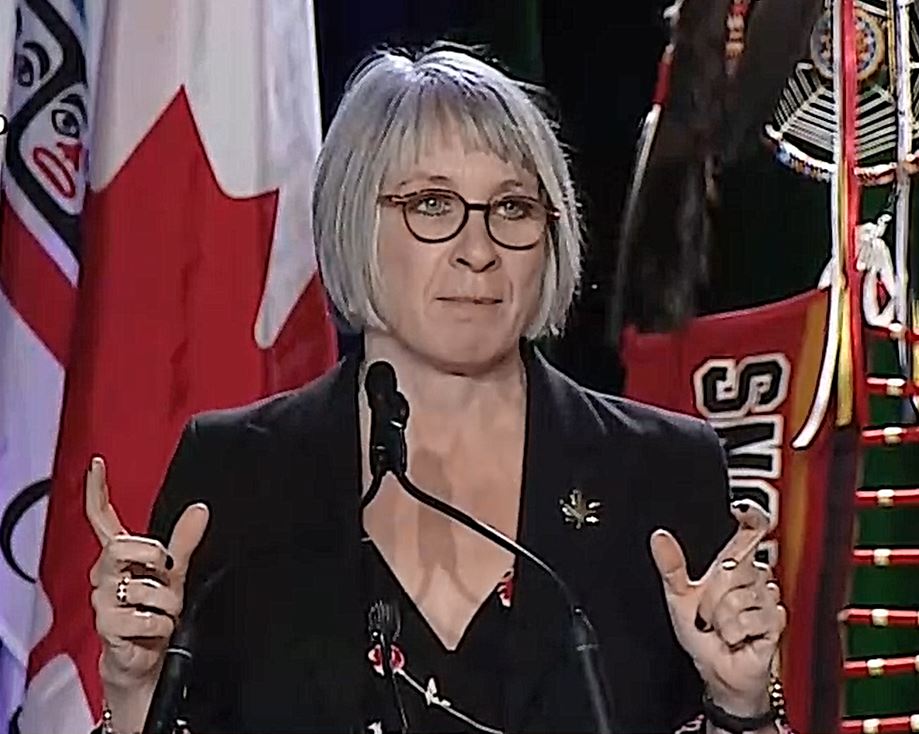 Hajdu, who spoke later in the afternoon, addressed the new Indigenous Skills and Employment Strategy program now delivered through her department. Funding, which has seen a 57 per cent increase, is now committed for 10 years and gives flexibility and control to the communities.

“We will ensure a much more respectful and collaborative relationship with First Nations and your service delivery organizations,” said Hajdu.

Skills lead to jobs which lead to economic growth of a community, she said.

“This is about transforming your community so that every person has an opportunity to succeed,” said Hajdu. “Indigenous people are the best at designing their own and delivering their own programs for their own citizens.”

British Columbia Regional Chief Terry Teegee, who holds the portfolio on human resources development for the AFN, told Hajdu that although the new skills program had an increased price tag of $1.1 billion, which translated to $235 million annually, it wasn’t enough. He said a new allocation model was needed.

“There is a shortfall in regards to the cost of inflation as well as proper population indexing because we certainly know our Indigenous communities are growing faster than the norm,” he said.

Hajdu, who was meeting with the HR AFN committee after her address, said she would work with them to determine how to move forward.

In the morning, Indigenous Services Canada Minister Jane Philpott addressed the assembly and, like Prime Minister Justin Trudeau and Minister of Crown-Indigenous Relations Carolyn Bennett did the day before, she held the newly announced child welfare legislation up as an example of the Liberal government working with First Nations to uphold their jurisdictional rights. 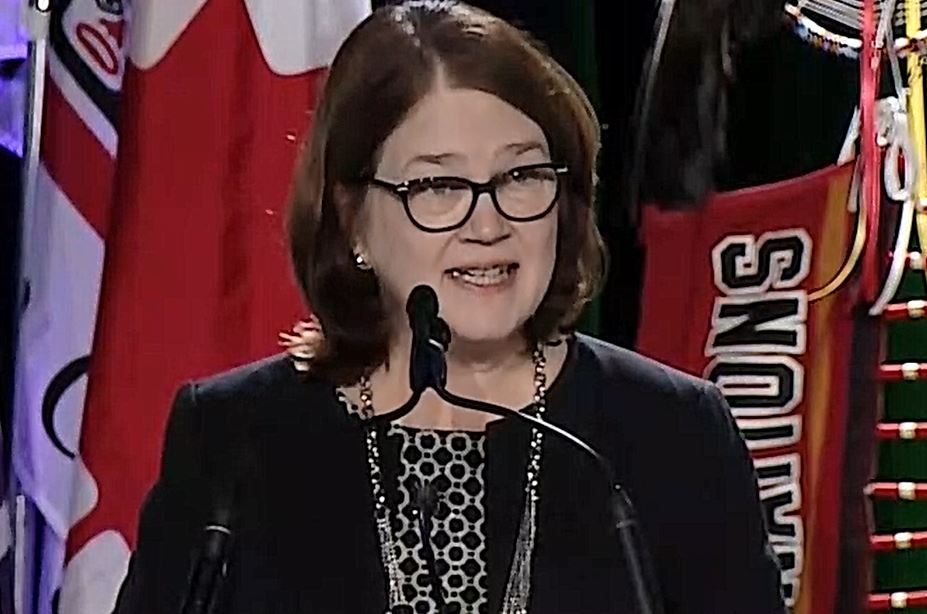 “We have been working together on that very actively over the last number of months in a spirit of co-development because you are the ones who know what that legislation should say and how it should impact your communities,” said Philpott.

Legislation is to be introduced in January 2019.