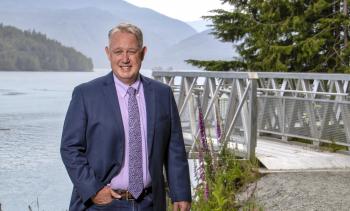 Cory Stephens is the 2021 recipient of the Aboriginal Business Award for Excellence in Aboriginal Relations. Photo by www.lonniewishart.com

“When I looked up previous recipients, I was caught off guard a bit. I was almost short of breath when I looked at the list of prestigious winners.” — Cory Stephens
By Sam Laskaris
Local Journalism Initiative Reporter
Windspeaker.com

Cory Stephens does not like being the centre of attention.

But that’s unavoidable now since Stephens has been announced as the 2021 recipient of the Aboriginal Business Award for Excellence in Aboriginal Relations.

The Canadian Council for Aboriginal Business (CCAB) and CIBC join forces to select a deserving award recipient each year.

“I shy away from the limelight and I always have,” Stephens said. “But an award like this makes me incredibly proud.”

The accolade Stephens has won recognizes an individual, either Indigenous or non-Indigenous, who through professional and volunteer commitments has contributed to building bridges between Indigenous peoples and Canadian society.

The award also recognizes those who have made major impacts across social, cultural and political sectors.

Stephens has been an instrumental figure with the Indigenous Advancement of Cultural Entrepreneurship (I-ACE) program offered through the University of Victoria since 2013.

Stephens continues to mentor many of these graduates who have collectively started 184 new businesses in 67 different Indigenous communities.

“(Cory) is an exemplary example of this initiative, and we are pleased to present this award to him,” Bull said.

Linda Hartford, the executive director of CIBC’s Indigenous Markets and Trust Services, also believes Stephens is a noteworthy recipient of the award.

“At CIBC, we are focused on taking an active role in educational programming, sponsorships and donations at both the community and national level,” Hartford said. “(Cory) exemplifies dedication to bringing community together through education and entrepreneurship and we are delighted to be presenting this award to him.”

Stephens was nominated for the award by Miles Richardson, the chair of the National Consortium for Indigenous Economic Development.

Stephens will receive his award as part of the CCAB’s Business Recovery Forum this fall. Because of the COVID-19 pandemic, the forum, scheduled for Sept. 22, will be a virtual event, as it was last year.

The event will be an opportunity to network, collaborate and exchange ideas on how to rebuild businesses and offer suggestions to find a path leading to a more prosperous Indigenous economy.

Stephens’ preference would be to have his award presented in person instead of via a virtual ceremony.

He’s hoping the event will still be a memorable one.

“It usually is a pretty formal event,” he said. “And I think my wife is planning to bring together a small group of friends and family into a room.”

It is expected Stephens’ award will be shipped to him prior to the virtual ceremony.

“I think it may be presented to me by a colleague or family member,” said Stephens, who lives in Prince Rupert, B.C.

Stephens admitted he had not heard of the award until he was announced as this year’s winner.

“When I looked up previous recipients, I was caught off guard a bit,” he said. “I was almost short of breath when I looked at the list of prestigious winners.”

Fontaine is the former national chief of the Assembly of First Nations. Simon is Canada’s newest Governor General, installed today. Sinclair is a former Canadian senator who also served as the chair of the Truth and Reconciliation Commission. And Hilton is the founder and CEO of the Indigenomics Institute.

Stephens said winning his award furthers his commitment to continue doing his job.

“I hold the CCAB recognition in high regard and will carry this honour as my ongoing motivation to further influence First Nations active participation in local, regional and international economic development and entrepreneurship,” he said.

Stephens believes the award will bring added prestige to the program.

“The CCAB recognition will provide tremendous value to the program as we actively begin to offer the entrepreneurship training nationally,” he said.

Stephens mother was Tsimshian and he was raised by her and his Nisga’a stepfather in Prince Rupert.

He graduated from the University of Victoria’s Gustafson School of Business.

Upon finishing school his goal was to bridge gaps between Indigenous entrepreneurs and others in Canadian businesses.

He worked for various companies and government trade organization before starting his own company, Foot Print Consulting.