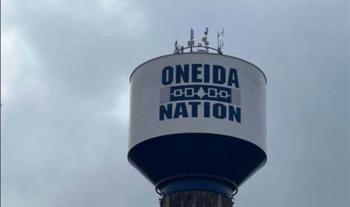 “Our community knows what we want, knows what we need and the federal government is trying to give us what they think we need. It’s coming from a colonial mindset, a patriarchal mindset…” —Councillor Brandon Doxtator
By Shari Narine
Local Journalism Initiative Reporter
Windspeaker.com

Tragedy five years ago that claimed the lives of a father and his four children on the Oneida Nation of the Thames in Ontario has the community insistent that the federal government work with them to meet their water needs.

On Dec. 15, the First Nation declared a state of emergency and ordered community members to start conserving water.

The water alert was issued after a member reported his tap water was coming out brown, consistent with a high iron content. An investigation indicated that the level of the aquifer from the Thames River that feeds into the Oneida water tower is low. The tower services 546 homes and 22 community buildings.

While the water department regularly monitors the aquifer, Councillor Brandon Doxtator says the low water level was a surprise and is an indication of the impact of climate change and extreme weather events.

“This isn’t usually consistent with what will happen in December. We would usually see something like this happen in the summertime when there’s high usage of water,” he said.

Over the last 10 years, water alerts have been issued on a consistent basis for one week or one month in the summer to address the low water.

However, says Doxtator, water trucks have never been employed before.

In the week since the emergency was declared, 16 water trucks have been brought in to fill the water tower. Each load costs $20,000, he says.

“If we didn’t declare the emergency, we would potentially have no service for community members,” said Doxtator.

Water issues are long-standing for Oneida.

“We had a tragic fire in our community back in 2017 and the reason that the fire happened the way it did was because we didn’t have fire hydrants in the community. We only have them on two of our roads. So fire flow is really important for us, politically, for our community to push for,” said Doxtator.

However, Indigenous Services Canada (ISC) has refused to fund the work supported by a feasibility study begun in 2019. That solution proposed 12-inch pipelines to address fire flow, a substantial increase in fire hydrants, and a 20-year agreement with the Lake Huron Primary Water Supply System (LHPWSS).

ISC has “pushed back” with eight-inch pipelines, which don’t address fire flow concerns, and an eight-year agreement with the LHPWSS, says Doxtator.

Further discussions with community leadership will include alternative options for ensuring adequate fire protections for rural areas of the community, he said, including improving existing fire protection services and/or entering into firefighting service agreements with neighbouring communities.

“Oneida Nation of the Thames has the option to fund fire flows in the rural areas not funded by ISC under the current policy,” said Gauthier.

He said ISC is collaborating with Oneida to finalize funding in order to hire a consultant who will complete the design of the on-reserve work.

Oneida’s proposal came at a price tag of $24 million which has now crept up to $42 million. Doxtator doesn’t know what ISC’s proposal would have cost.“Our community knows what we want, knows what we need and the federal government is trying to give us what they think we need. It’s coming from a colonial mindset, a patriarchal mindset where the federal government thinks they know best but…we have the backing of the Huron water authority on this,” said Doxtator.

Gauther said while ISC is supporting Oneida in negotiating for a supply agreement with the LHPWSS, he is not aware of any formal agreement having been reached.

And now Oneida has declared a state of emergency because of a lack of water and there’s still no permanent solution on the horizon.

Instead, ISC is settling for short term answers, says Doxtator, making commitments to help out through the state of emergency.

“That just goes to the lacklustre reactive approach that Indigenous Services Canada is taking when we could have been six months into construction or detailed designs of a new water tower facility or whatever that need was,” he said.

Residents have been directed to keep baths to five minutes, turn the tap off while brushing their teeth, cut down on laundry and dish washing, and check for leaky pipes.

Since September 2019, a boil water advisory has been in place for the approximately 2,200 residents. Bottled water has been brought in since then. While prices range, Doxtator says at one point the Nation was spending $15,000 every six weeks.

“I can see us getting to that level again, depending on the needs,” he said, noting that extra bottled water is being provided to Elders and those who can’t make it to the community centre for water pick-up.

“But it’s still not where we need it to be,” said Doxtator.

“This is a community-led project, and Oneida Nation of the Thames leadership will ultimately determine how best to meet the community’s needs,” said Gauthier.

ISC will provide advice and guidance to leadership. Funding will be provided in accordance with ISC protocols and policies, he said.

Oneida Nation of the Thames is located near London, Ont.