Nation building and social enterprise investment a model for prosperity 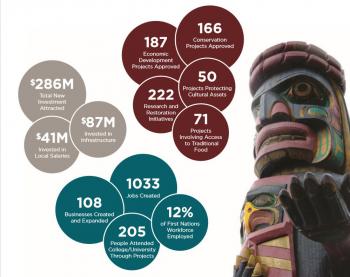 “Over the last 10 years First Nations in the Great Bear Rainforest and Haida Gwaii have created a road-map for how we can sustain the most ecologically significant places on the planet…” — Huux Percy Crosby of the Haida Nation
By Shari Narine
Windspeaker.com Contributor

Brodie Guy is thrilled with the impact Coast Funds has had over the past decade. The funds were negotiated for the First Nations in the Great Bear Rainforest and Haida Gwaii to grow the economy of the region while respecting conservation and Indigenous stewardship.

Legislation was developed that curbed the impacts of industry, such as forestry, mining and other extractive uses. But curtailing exploitation of the territory was just the beginning.

“If you don’t create a pathway to move to something more sustainable, more locally controlled, then you’re going to be restricting people’s ability to prosper,” said Brodie, executive director of Coast Funds.

Coast Funds was created with $120 million from government and industry. The results of the past 10 years of that conservation financing are outlined in the Coast Fund’s newly-released 12-page report.

Conservation financing is a financial mechanism to really support Indigenous peoples to steward their lands in a different way and to invest in their people, said Guy.

The investment has been impressive. More than 353 projects have been approved for $81.6 million with the work attracting $286 million in total investment.

Getting funding for straight economic development is not as challenging as getting funding for nation-building and social enterprises, says Guy. Coast Funds leaves it up to the communities to determine how best to spend that money.

“Over the last 10 years First Nations in the Great Bear Rainforest and Haida Gwaii have created a road-map for how we can sustain the most ecologically significant places on the planet while enhancing the well-being of the people who have lived in those places for thousands of years,” said board chair Huux Percy Crosby of the Haida Nation.

Guy has been executive director for the past six years, but he was involved with Coast Funds from the beginning as a partner organization. No one thought the concept would take off the way it did.

“There were high hopes that the idea of empowering First Nations with pretty significant investment… would result in some great things but no one expected it to have the kind of impact after only 10 years that we’re already seeing,” he said.

Because of that success, the Coast Funds model is being embraced internationally. The Indigenous people of the Andes have started Peru’s Natural Legacy, which in May secured $140 million to expand and effectively manage nearly 42 million acres of the Peruvian Amazon.

“It’s a model of empowering local people to chart a course for their future and create a sustainable approach that works within their vision of who they are and their culture and the kind of employment and the way they want to see their community evolve,” he said.

“This model can and must be replicated across the globe,” said Crosby.

Now more than ever, work that Coast Funds allows is important, says Guy.

“There are some really scary things happening on the West Coast and there needs to be better local control. People who know best how to steward and manage their resources and territories need to be at the forefront of these things. So that’s a huge piece of work there,” he said Brodie.