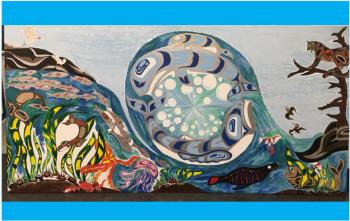 “I felt very connected with the mural because it made me realize how important our culture is.” —Reese Franko, a Grade 8 student
By Shari Narine
Windspeaker.com Contributor

Geena Powa Sutherland wanted to find a way for the First Nations students at Alberni District Secondary School to leave their mark.

And she did in a vibrant, storytelling manner.

After two months of artwork, preceded by months of class time, lunchtime and after school discussions with local Elders and linguistic speakers about tradition and culture, a three-panel mural will be unveiled June 11 in the theatre wing at the Grades 7 to 12 school.

“We wanted to have something really visible in the school that can tell a story. We wanted it to talk about how it is to build a community,” said Sutherland.

Sutherland began as the Nuu-chah-nulth education worker at the Port Alberni school in October. With a school population of close to 1,300 and Indigenous students accounting for about 300, she wanted to find a way for the First Nations kids to retain that connection with their traditional roots. Most of them had come from community feeder schools, which made them strong in their culture.

“When you’re brand new to a place you want to figure out how to get your imprint on the school,” said Sutherland.

Coming from a traditional background herself where she grew up “really rich” in her culture and heritage, Sutherland connected with the school’s Nuu-chah-nulth language teacher to discuss collaborating on a project.

As Sutherland talked to the students about how traditional communication for their people was depicted visually and not written down, and as she is an artist, a mural seemed a natural fit.

With the support of the school, Sutherland applied for a grant from the First Peoples Cultural Council, a First Nations-run Crown Corporation with a mandate to support the revitalization of Indigenous languages, art, culture and heritage in B.C. She needed the money to pay for supplies and artists to work with the students. She was pleasantly surprised when she received the funding.

And so began the intensive work of creating the panels. Sutherland says information sessions were held with the students to determine what would appear on the panels. Some suggestions included wolves, eagles, bears, salmons and seals. The professional artists, herself included, along with Kerry Erickson and Jake Gallic, drew the artwork and colour-coded the design.  The students learned from the artists about how to hold a paint brush and what kind of strokes to use.

“The students are doing the big work, about 75 per cent of the work,” said Sutherland. 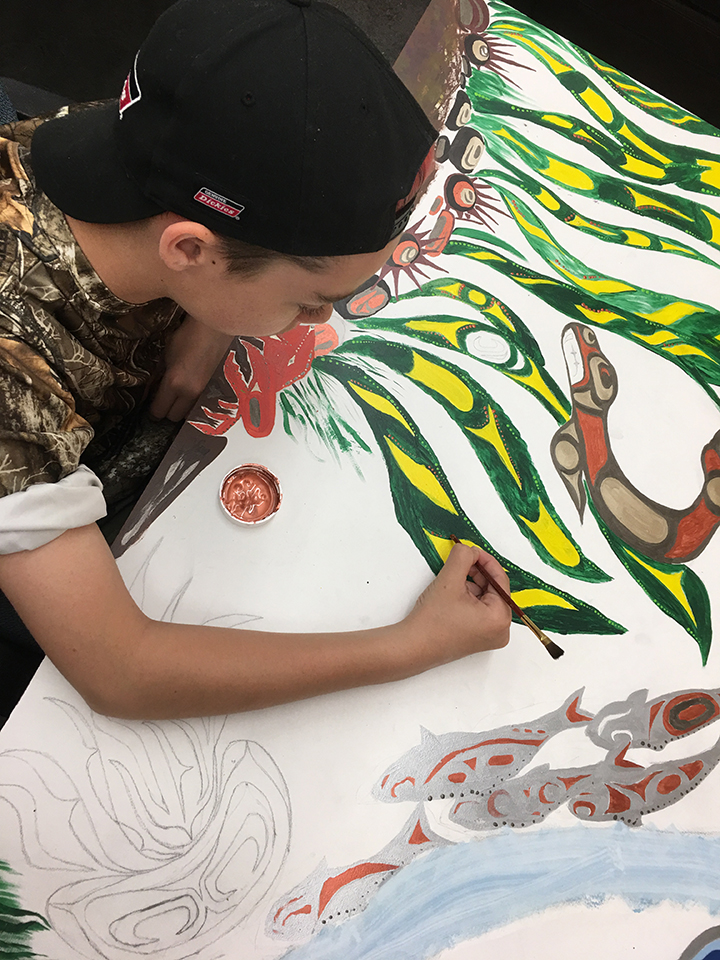 Each panel is four-foot by eight-foot.  There were about 10 core students in Grades 8 and 10 doing the majority of the work, but the general school population also picked up a paintbrush to add their touches. Students and artists worked side-by-side.

“I felt very connected with the mural because it made me realize how important our culture is,” said Reese Franko, a Grade 8 student, who spent 60 to 100 hours on the mural.

“It means a lot to have something representing me as myself as an Indigenous person. I may not have a lot aboriginal culture or blood, but I feel it still connects me to my dad’s roots and to his dad’s roots,” said Grade 8 student Caleb Dudman. “When we were working on the painting, I was so into it that, to me, it only felt like I was there for five to 10 minutes.”

The school’s theatre wing is used by the wider community and the mural will hang in an empty space above the school’s graduation photos.

Takara Hayes, also in Grade 8, said having the mural so visible “is kinda cool because I’m proud of what I did on the mural.”

“I feel the murals will add a wonderful Nuu-chah-nulth ambiance to our building,” said Nuu-chah-nulth education worker Dianne Gallic, who helped Sutherland build the proposal for the grant funding.

“I know many years from now (our students) will be able to come back here and proudly proclaim that they helped with the vision and the production of these murals.”

Sutherland says she hopes this is the start of an ongoing project as there is room to add more panels.

“It’s really pulling everybody together. It’s a really an amazing opportunity,” she said. 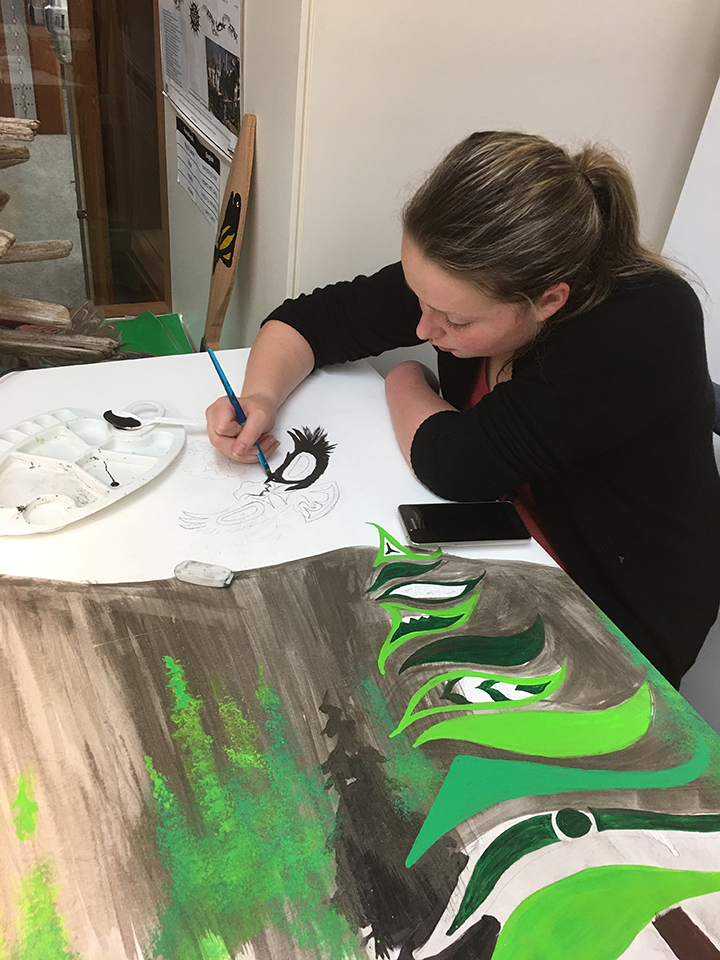