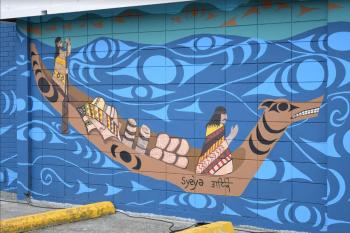 “We should celebrate (our) differences, and that’s what these artists have done today. They have carried their history with them into the paintbrush.” — Musqueam artist Debra Sparrow
By Cara McKenna
Reprinted with permission from the Salish Sea Sentinel

To promote Indigenous publications and journalism, Windspeaker.com has partnered with the Salish Sea Sentinel to republish this article.

Coast Salish and South Asian-Canadian artists have collaborated to memorialize a historic tragedy that brought the two communities together more than 100 years ago.

A 4,000-square foot mural called Taike-Sye’yə has been revealed on the side of the former Harry Stevens Federal Building in East Vancouver in commemoration of the Komagata Maru episode of 1914.

During an event to unveil the mural on Aug. 9, federal representatives gathered to officially strip Harry Steven’s name from the building, citing the late Canadian politician’s involvement in the very tragedy now depicted on the side of the structure.

Media and guests heard how Stevens was instrumental in causing the tragedies that unfolded during the Komagata Maru episode, when a ship from India was blocked in the Burrard Inlet for two months.

The ship carried about 375 passengers who hoped to immigrate to Canada, but Stevens worked with other officials to block its passengers from coming to shore, forcing them to endure long stretches without food or water.

During this time, historians say the Musqueam people helped the passengers to survive, paddling out in canoes to deliver food and supplies.

Still, the ship was eventually forced back to India by military officials where 19 of the passengers were shot to death upon arrival, and many others imprisoned.

“Members of the local Sikh community were unable to convince authorities to allow passengers to disembark,” she said.

“If it were not for the compassion of the local Coast Salish people who came to the ship by canoe, bringing food and water, this tragedy would have been even more horrific.” 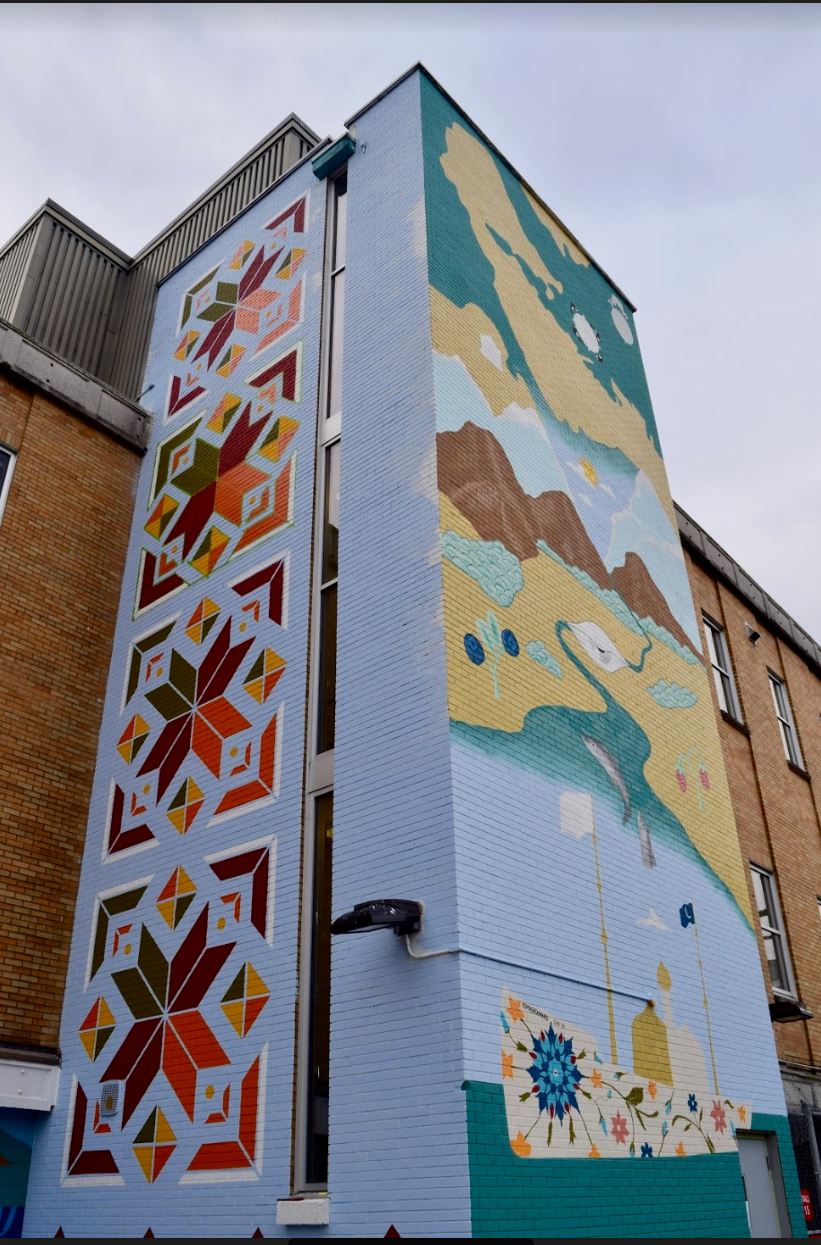 The newly-revealed 4,000-square foot mural at the side of the building depicts the Musqueam welcome given to the Komagata Maru passengers, combining Coast Salish, South Asian and surrealist art styles.

The mural’s name Taike-Sye’yə uses the Punjabi word “Taike” — a Canada-specific word that roughly translates to “cousin” — and the hən̓q̓əmin̓əm̓ word “Sye’yə” which means “friend.”

“That word Taike is really all used in this territory because of this friendship was created between these two Indians,” said Musqueam artist Debra Sparrow, who opened the event.

“We should celebrate (our) differences, and that’s what these artists have done today. They have carried their history with them into the paintbrush.”

Mural artist Alicia Point worked on her half of the mural with her grandson Cyler, and said they were inspired by the two diverse cultures coming together.

Raj Singh Toor, a descendent of one of the Komagata Maru passengers, said he hopes the mural and removal of Harry Steven’s name from the building will help to educate the community.

“While it can’t right past wrongs, I hope it will help connect Canadians with their past to help build a more peaceful and tolerant tomorrow,” he said.

The former Harry Stevens Federal Building at 125 10th Avenue will now be known only by its street address.

The new mural is part of the annual Vancouver Mural Festival, which takes place in the Mount Pleasant neighbourhood and involves new artwork being unveiled in the area during a huge festival. 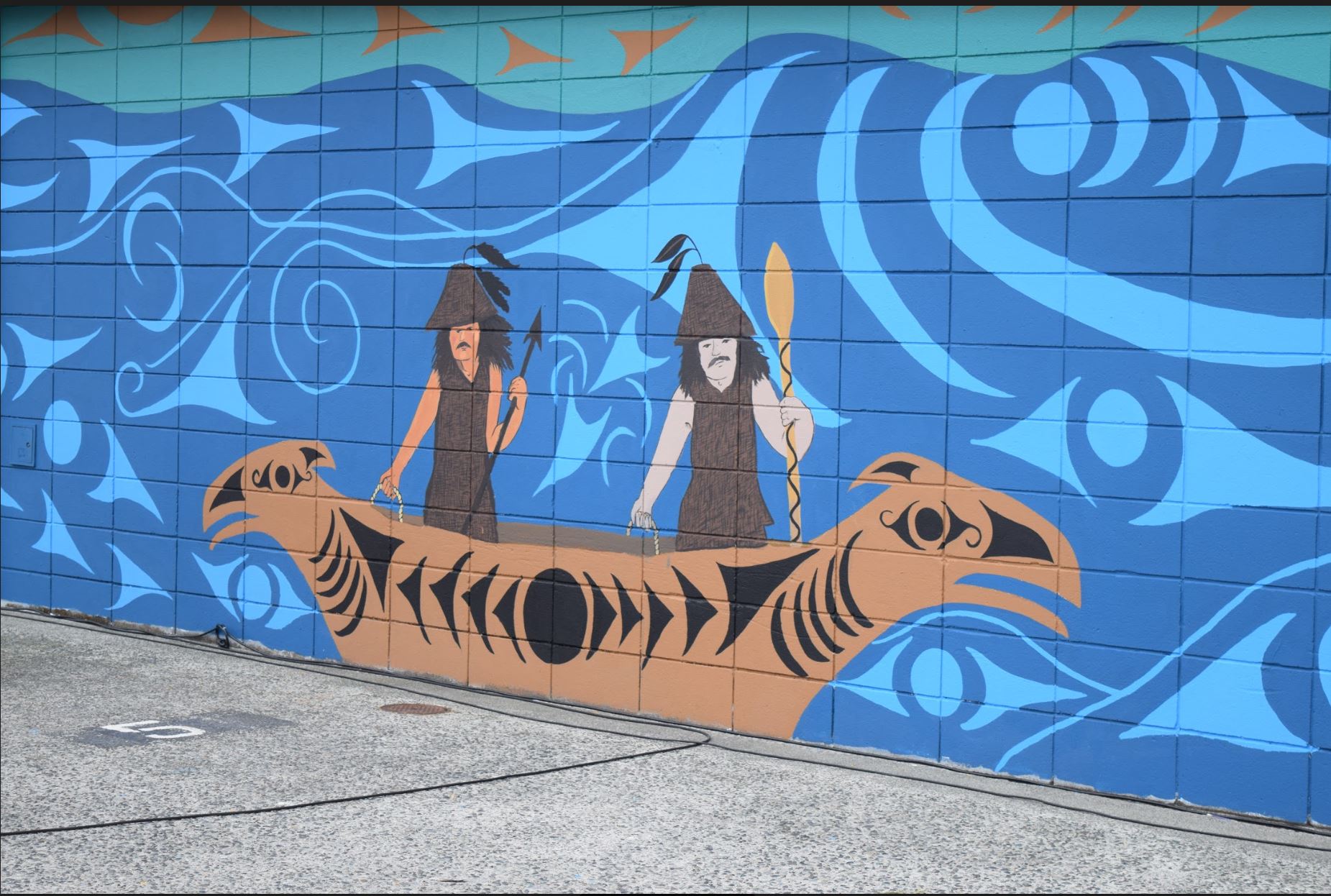