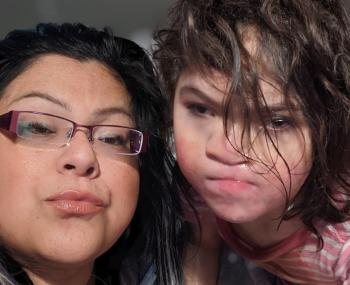 “If Sept. 12 is the last day they’re going to assist me, that means we’re going to be homeless and my children are going to go into care. That was one of the reasons why I had filed the civil suit against them.” — Crystal Jacobs.
By Shari Narine
Local Journalism Initiative Reporter
Windspeaker.com

Past and continued treatment of her daughter Mercy through Jordan’s Principle is an indication that Indigenous Services Canada (ISC) is failing to put the needs of First Nations children first, says Crystal Jacobs.

In May 2022, Jacobs began legal action in the Ontario Superior Court against ISC, which funds Jordan’s Principle. She is asking for $5.35 million for general and special damages.

Her statement of claim alleges that “Mercy was discriminated against due to the level of care that she requires.”

Jordan’s Principle is a ‘child first’ principle which requires the government of first contact to consider and evaluate the needs of each First Nations child to ensure they can access services when they need them.

It is not a program, but “a legal principle designed to address gaps in government-funded services and discrimination that can result in delay, disruption or denial of services to First Nations children,” states ISC’s website.

Jacobs says she and her husband take turns caring for Mercy. But as Jacobs has back pain, she isn’t always capable and this means her husband is full-time caregiver and cannot work. They depend on respite care but have had difficulty getting the approval through Jordan’s Principle to cover the gap in funding that is left after their Ontario government funding has run out.

Most recently, Jacobs had to wait for months to get reimbursed. Although her request to Jordan’s Principle for respite care was approved a week after her application was submitted in September 2022, her follow-up application for reimbursement was only processed in January 2023, four months later. She says she received an email stating that there was a backlog in approving Jordan’s Principle requests.

ISC spokesperson Randy Legault-Rankin would not confirm that such a backlog existed.

He said it was ISC’s goal to process all invoices within 15 days of receipt and such was the case for nearly 67 per cent of those invoices from April to September 2022. However, that time period does not cover the time period in which Jacobs had issues.

Legault-Rankin’s 2022 figure is a sharp contrast to the same time period the previous year, which saw 81 per cent of all invoices processed within 15 business days.

“If a parent (or) service provider advises ISC that they have experienced a delay or overpayment, ISC works with them to resolve the payment issue,” said Legault-Rankin.

Having to pay this money out-of-pocket has had a devastating impact.

“At one point in time our cell phones, internet, hydro and gas got disconnected. We couldn’t afford to pay them. I even had to sell my vehicle in order to barely keep my head above water,” said Jacobs.

The ISC website states, “Applying the lens of the best interests of a child under Jordan's Principle requires an evaluation of information, considering the specific circumstances of each identified child or group of children, as well as being responsive to each child's particular age, capacity, diagnosis, needs, maturity and circumstance.”

Jacobs thinks Jordan’s Principle workers feel she is abusing the system, although she said they have not come out and told her that. But the reality is, she says, the older her daughter gets, the more support she needs.

It was with that in mind that the family made the decision in 2021 to relocate from Timmins, Ont. to North Bay, Ont. The move, which was to provide easier access to the SickKids hospital in Toronto, hasn’t brought the relief Jacobs expected.

The plan, says Jacobs, was to have her mother move to North Bay with them so they could split the costs of owning a home. However, her mother passed away May 29, 2021, after contracting the coronavirus.

As steps had already been taken prior to her mother’s passing, Jacobs and her family, which includes a 13-year-old daughter, followed through with the relocation to North Bay. They could not afford accommodations on their own. Through Jordan’s Principle, they had three months accommodations paid for in a hotel, but then “everything just kind of went downhill from there,” said Jacobs.

She says all rental accommodations she found and submitted for approval to Jordan’s Principle were turned down as being too expensive.

Then in August 2021, she says, the Jordan’s Principle program manager said their assistance for accommodations would come to an end in September.

“If Sept. 12 is the last day they’re going to assist me, that means we’re going to be homeless and my children are going to go into care. That was one of the reasons why I had filed the civil suit against them,” said Jacobs.

“My brother, he had cerebral palsy and he ended up in a group home because there wasn’t enough services back in the day…There’s no reason why my kids should ever be in care because me and my husband are fully capable. We go above and beyond for our kids.”

Jacobs says she fought the decision and ended up with a series of two-to-three-day extensions on her hotel accommodations. Not having any guarantee for long term support at the hotel was stressful, she adds.

Eventually Jacobs and her family received approval for a rental.

However, she points out, a rental cannot be modified in the way necessary to provide mobility for Mercy.

The statement of claim alleges that Jacobs’ inability to “secure a permanent home that they would be able to modify for their child, (shows) that Jordan’s Principle made up restrictions to create barriers for the plaintiff’s family.”

That statement of claim goes on to say that “Jordan’s Principle workers…bullied, denied and targeted the plaintiff and child who is severely disabled.”

As a result of this treatment, the statement alleges that Jacobs has “had a lack of service and products that would uphold their child’s rights to health, education and safety.”

Jacobs says Jordan’s Principle’s workers refused to correspond by email any of their decisions to turn down her applications for support. Instead, denials were only discussed by telephone.

As far as Jacobs is concerned the federal government is not abiding by the various decisions set out by the Canadian Human Rights Tribunal beginning in 2016 to ensure that Jordan’s Principle provides substantive equality and applies until that substantive equality has been achieved.

Legault-Rankin said ISC is aware of Jacobs’ legal action, as well as “other court actions related to Jordan’s Principle. As these are before the courts, we have no further comment at this time.”