More than 200,000 First Nations children to be compensated for discriminatory child welfare services 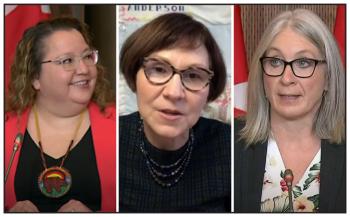 “These agreements-in-principle are non-binding and nothing changes in the lives of children today. We need to commit ourselves to keeping watch on the government in Canada and holding it accountable until it lands some of these things.” — Cindy Blackstock, executive director with the First Nations Child and Family Caring Society
By Shari Narine
Local Journalism Initiative Reporter
Windspeaker.com

Agreements-in-principle announced today as the result of intense negotiations over a six-week period confirms the $40 billion the federal government committed in its fiscal update to improve the lives of First Nations children and their families wronged by the child welfare system.

Of that money, $20 billion will be used to compensate in excess of 215,000 First Nations children and an unspecified number of their family members.

The other $20 billion is to be meted out over five years for long-term reform of the First Nations Child and Family Services program to ensure that the discrimination found by the Canadian Human Rights Tribunal (CHRT) in the child welfare system never repeats itself. This work will be led by First Nations communities.

Over the course of 30 years, numerous Assembly of First Nations national chiefs and rights holders have advocated for changes against discriminatory funding, said Manitoba Regional Chief Cindy Woodhouse, who is lead negotiator at the table for the AFN.

“In this case, 30 years, there’s plenty of shame to share,” said Crown-Indigenous Relations Minister Marc Miller about how Canada has dealt with First Nations children both on and off reserve in the child welfare system.

Indigenous Services Minister Patty Hajdu, who joined Miller and Woodhouse and other Indigenous leaders for a press conference about the agreements this afternoon, called the discrimination in funding child services and the treatment of First Nations children and their families “morally repugnant.”

The agreements-in-principle address two class actions, as well as a 2016 decision from the CHRT. All three deal with compensation for harm experienced by children and their families caused by the discriminatory underfunding of First Nations child and family services and the delay in receiving essential services under Jordan's Principle. Jordan’s Principle was put in place to ensure First Nations children received medical care without the delay caused by federal and provincial governments haggling over who would pay the bill.

Specifically, $20 billion is to compensate First Nations children on-reserve and in the Yukon, who were removed from their homes between April 1, 1991, and March 31, 2022, and for their parents and caregivers. This also includes compensation for those impacted by the government's narrow definition of Jordan's Principle between Dec. 12, 2007 and Nov. 2, 2017, as well as for children who did not receive or were delayed in receiving an essential public service or product between April 1, 1991, and Dec.11, 2007.

David Sterns, co-legal counsel in the Moushoom/Trout class actions, said individuals would receive a minimum of $40,000, which was the settlement ordered by the CHRT. He added that individuals who suffered “significant harm” in the system would be compensated in a manner that reflected that harm.

The details still need to be worked out before funding can be distributed, said Sterns.

He said consultations would take place over the coming months with the AFN, First Nations Family and Child Services and experts to determine a framework for payments and an efficient and culturally-acceptable distribution system for funds. He anticipated distribution of funds would begin in 2022.

The framework and distribution system needs to be approved by the federal court.

Woodhouse was joined by Grand Chief Joel Abrams with the Chiefs of Ontario and Deputy Grand Chief Bobby Narcisse with the Nishnawbe Aski Nation.

Cindy Blackstock, executive director with the First Nations Child and Family Caring Society, whose organization was party to the settlement, was not present.

Blackstock and the AFN took the initial action in 2007 to file a human rights complaint with the CHRT alleging Canada’s underfunding of child welfare services and discriminatory implementation of Jordan’s Principle.

Speaking in her own news conference following today’s announcement, Blackstock said litigation was necessary “to change Canada’s pattern” and that the Canadian public’s pressure on the government moved the settlement forward.

However, she said the work was not yet done.

“These agreements-in-principle are non-binding and nothing changes in the lives of children today. We need to commit ourselves to keeping watch on the government in Canada and holding it accountable until it lands some of these things,” said Blackstock.

She said her organization would be seeking a consent legal order from the tribunal in January to ensure the government provides funding for First Nations youth leaving care, as well as additional prevention funding for families as part of a binding order.

The agreements-in-principle settlement must be signed off by the federal court and the CHRT must also say it meets the tribunal’s compensation order.

The tribunal’s January 2016 decision was appealed by Canada, which was dismissed by the federal court in September 2021. However, Canada filed a further appeal with the Federal Court of Appeal on Oct. 29, 2021. That appeal is in abeyance.

Justice Minister David Lametti said that when a final agreement was reached it was the government’s intention to drop the appeal.

This is the largest class action settlement in Canadian history.