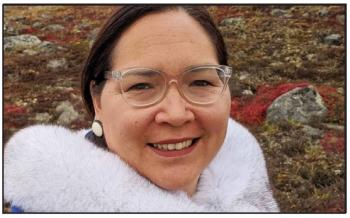 “It's still part of the whole colonial vehicle: ‘you have to learn our language’….There’s no recognition that you already speak your language and can provide and are totally capable of providing public services in your own languages.” — Nunavut Tunngavik Inc. President Aluki Kotierk
By Shari Narine
Local Journalism Initiative Reporter
Windspeaker.com

Newly re-elected Nunavut Tunngavik Inc. (NTI) President Aluki Kotierk is disappointed but not surprised that the plan to modernize the Official Languages Act is “similar” to when it was created in 1969 and made Canada an officially bilingual country.

“The modern reality in Canada is that there is a jurisdiction where both official languages of Canada are a minority language,” said Kotierk.

According to the 2016 Statistics Canada census, Nunavut is home to 22,600 Inuit who list a “non-official” language as their mother tongue compared to 11,020 who claim English and 595 who claim French. Nunavut became a territory in 1999.

The modernization language act plan states it will be based on six “guiding principles.” Among those is “the recognition of linguistic dynamics in the provinces and territories and existing rights regarding Indigenous languages.” It also notes that “as for Nunavut and the Northwest Territories they officially recognize English, French and some Indigenous languages as official languages….”

As far as Kotierk is concerned, these statements are merely an inventory of languages spoken and officially recognized in Nunavut.

“I think it could have gone further to have a scan of the linguistic population. When you read that, no one, unless you’re aware, would think that ‘Oh, a jurisdiction (in which) both English and French must be a minority,’ in the case of Nunavut,” said Kotierk.

Another concern voiced by Kotierk is whether changes to the legislation is being looked at through the lens of the Nunavut Settlement Area agreement, which was signed between the federal government and Tungavik Federation of Nunavut and came into law in 1993.

Article 23, she points out, speaks to a representative work force, ensuring that 85 per cent of the public service is Inuit.

“Yet in this document from Minister Joly, it talks about how the government is committed to ensuring Anglophones and Francophones have equal opportunity to pursue careers in the federal institutions. I read that and (thought) what about the Nunavut agreement and the constitutionally protected rights of Inuit to be employed in the public service and a linguistic requirement to speak French cannot limit that,” said Kotierk.

The modernization document does reference Inuit employment and training, stating “support(ing) the recruitment and retention of public servants that reflect the diversity of the Canadian population, the government will recognize a more inclusive application of official language requirements. This more inclusive application will take into account positions requiring Indigenous cultural or linguistic competences” and “the government will elaborate and use second language training framework for the public service that will ensure quality instruction and be adapted to learner specific needs. Notably this framework will take into account the specific needs of Indigenous persons.”

Kotierk is unclear what either of these administrative proposals mean, although they emphasize the need for public servants to know both English and French and omit Inuktut.

“Even that sits wrong with me. It's still part of the whole colonial vehicle: ‘you have to learn our language’….There’s no recognition that you already speak your language and can provide and are totally capable of providing public services in your own languages,” she said.

When the Indigenous Languages Act was introduced and passed in 2019, Kotierk voiced her disappointment that it did not acknowledge Inuktut as an official language in Nunavut even though 85 per cent of the population is Inuit. It meant federal services and other public services would not be offered in the language spoken overwhelmingly by the residents.

This January in a five-day symposium hosted by Canadian Heritage to look at different aspects of the Indigenous Languages Act, Kotierk spoke passionately about her ‘failing’ to “help the federal government understand that Inuit want to live with dignity in their own homeland.” That dignity included being served in their own language.

In her presentation at the symposium, Kotierk described the public safety concerns of not recognizing Inuktut as an official language. She described an incident in mid-January in which a unilingual Inuktut speaking Elder had traveled to the territory’s capital with a young toddler.

“Upon arrival to the airport they called the patient’s boarding home to ask for a pick up. The person who answered the phone was unable to speak and understand Inuktut. Without getting into the attitude of the person on the end of the phone, the result was that the Elder proceeded to start their walk from the airport to the boarding home with a small toddler in tow in mid-winter. Think about how undignified it must have felt for the unilingual Inuktut speaking Elder who cannot function and meet basic needs in their day-to-day life because they are unable to speak English or French – in their own homeland – to boot!”

At that symposium both the Métis National Council and the Assembly of First Nations voiced their support to have Inuktut as the public service language in Nunavut.

It had been Kotierk’s hope that the modernization of the Officials Languages Act would deliver what the Indigenous Languages Act did not. But that hasn’t happened.

There is no meeting scheduled with Joly or officials of her department, but Kotierk says there is an Inuit-Crown partnership meeting tentatively scheduled for April 1 and will include Prime Minister Justin Trudeau and a number of yet-unnamed Cabinet ministers.

“We will continue to bring attention to the fact we’re the only jurisdiction where homogeneously we speak a public language that's not an official language of Canada and we will continue to advocate to ensure that Inuit are provided public essential services required in Inuktut so Inuit can live in dignity in Canada,” said Kotierk.