Minister understands there is cynicism about government’s reconciliation approach 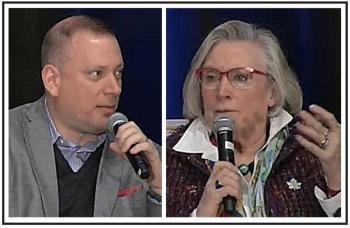 “Never again will conversations with the federal government be based on cede, surrender or extinguishment.” —Crown-Indigenous Relations Minister Carolyn Bennett
By Shari Narine
Windspeaker.com Contributor
EDMONTON

Crown-Indigenous Relations Minister Carolyn Bennett told chiefs May 2 that her government will be issuing a directive to federal officials working on rights, recognition, and the implementation of Indigenous rights to ensure that the United Nations Declaration on the Rights of Indigenous Peoples is “very present at every table.”

“Canada has embraced it and Canada wants to live by it in terms of our understanding of the honour of the Crown,” said Bennett.

Her announcement was met with applause at the Assembly of First Nations’ Four Policies and Nation Building Forum in Edmonton, but it wasn’t the rousing endorsement that might have been expected considering the concerns strongly voiced by chiefs the previous day in response to what many considered government’s White Paper 2.0 rights termination assault.

Later, Bennett said she wasn’t surprised by the polite response.

“I have to every day live with the fact that there’s 150 years of broken promises, 150 years or more of colonial practises and, therefore, I always expect there will be cynicism and people will want me to not only talk about reconciliation, but move, as Grand Chief (Wilton) Littlechild says. ‘Reconcili-action’.

“And so people want to see the concrete actions that will be put in place to make sure that their inherent and treaty rights are honoured and will be honoured for generations to come. That’s the work we have to do together. It’s tough work,” she said.

Bennett addressed chiefs at the second day of the two-day forum. The majority of the nearly two hours she spent with chiefs was a question-and-answer portion, in which Senior Assistant Deputy Minister Joe Wild also responded to a handful of questions.

“You have my full commitment and that of the prime minister to support a process that is led by First Nations rights and treaty holders and we will co-develop rights-based policies that can replace the comprehensive land claims policy and inherent right policies. And also, we want to work together with you on improving the specific claims and the (addition to reserve) processes,” said Bennett.

All four policies were the focus of this forum, which began May 1. The forum was in response to the federal government’s push for the Rights, Recognition and Implementation Framework legislation. In December, AFN Chiefs in Assembly rejected the framework legislation claiming that it was being led by Ottawa and not by First Nations.

Chiefs expressed concern yesterday that the government was attempting to piece-meal the legislation by moving ahead unilaterally on policy changes without full consultation or full transparency.

Both Bennett and Wild came under fire earlier this year from the AFN executive. In March, Bellegarde wrote a letter to Bennett, copied to Prime Minister Justin Trudeau, condemning what the AFN viewed as an end-run by her department to implement processes associated with the framework legislation.

In an internal AFN document in February, Wild was called-out for an “unacceptable” proposed planning committee which slotted AFN into a “predetermined” administrative role for framework legislative changes.

Bennett says her government has heard and instead of pursuing legislation or policy will now be issuing the directive or “guidance document.”

She said a “cultural shift in the federal approach” was needed.

“Never again will conversations with the federal government be based on cede, surrender or extinguishment,” she said.

Bennett said all conversations would be funded by the government. As well, outstanding loans will be forgiven and First Nations will be reimbursed the money they have expended.

Bennett pointed out that discussions were taking place with more than 75 Indian Act bands and the bands were the ones setting the agenda and leading the discussions.

She announced the government was providing an additional $1.5 million towards reforming the specific claims process. She said the government is changing how it handles claims, with communication opened immediately on a claim and funding provided right away for the claims research.

Additions to reserve reform will continue, she added, with the lengthy process and timeline streamlined as proposals will now require approval through ministerial order and not an order-in-council.

Speaking afterwards, Bennett said that she felt the skepticism voiced by many of the chiefs at the microphones weren’t shared by those First Nations that have met with her department around a variety of issues.

“I have to say the people who are at the tables are a little bit more optimistic than people not at tables yet, and so we’re working very hard,” she said.

“People are at the table, asserting their jurisdiction and that’s the way we get through this; it’s about us listening and being able to be partners in supporting the vision that nations have for themselves.”