Minister in Edmonton to talk $47.5 million for Indigenous sports initiatives 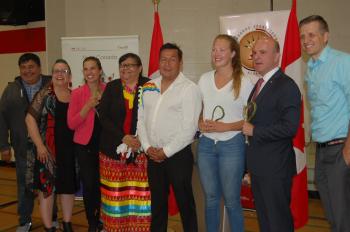 Members of the Indigenous Sports Council of Alberta with Minister Kirsty Duncan (third from left) and MP Randy Boissonnault (second from right). Photo by Shari Narine

“We want to know what sport, health and wellness means to them and how do we build a strategic plan around that.” — Shannon Dunfield of the Indigenous Sports Council of Alberta
By Shari Narine
Windspeaker.com Contributor

Shannon Dunfield is thrilled that her organization, the Indigenous Sports Council of Alberta, will be the recipient of close to $1 million from Canadian Heritage over the next two years.

The money, announced Aug. 12, is only a small amount of the $47.5 million the Liberal government has committed over five years to expand sport and physical activity programming in 300 Indigenous communities across Canada.

The sports council is the first recipient of funding through the Indigenous Sports Initiative.

“With what we have right now and moving forward, we’re really excited about using this funding to be able to develop a strategic plan that will move us forward over the next 10 years,” said Dunfield, who is expecting the money to come soon.

While she hasn’t given much thought to what that long-term financial commitment will look like if the Trudeau government isn’t re-elected in October, she said the ISCA board will discuss that.

“Part of those strategic plans will be those discussions around if the funding is gone then how do we move forward and build sustainability without it,” she said.

ISCA plans to talk to as many First Nations and Metis communities as it can throughout the province and to host community engagement sessions.

“We want to know what sport, health and wellness means to them and how do we build a strategic plan around that. It’s going to be a broad range. How do we keep it within the scope of work we’re able to do,” said Dunfield.

Kirsty Duncan, minister of science and sport, who made the announcement in Edmonton, credited Edmonton Centre MP Randy Boissonnault for lobbying on behalf of Indigenous youth.

“Everyone deserves the right to benefit from sports. Sport builds self-esteem and leadership skills, allows our children and youth to grow and thrive, physically emotionally, socially,” she said.

“Active participation in sport can benefit youth in many ways including, connecting with traditional sports and culture.”

To highlight that point, youth athletes Bret Buffalo, 18, a member of Whitecap Dakota Nation, who grew up in Edmonton, and Payton Bouvier, 19, a Metis youth from Lac La Biche, both spoke about the opportunities sports provided for them, as well as the friendships and bonds that were formed

“Sports kept me accountable,” said Bouvier, who is a volleyball player with University of Alberta’s Augustana campus women’s team. “As a team you always strive to achieve the highest goals you can for yourselves and that’s very important to me as well.”

Buffalo, who saw success in both box and field lacrosse, is a youth ambassador for the Alberta Indigenous Games.

“I hope it inspires more Indigenous youth to come to the games and try sports. Not just for them, but also for their life to … expand, not just as athletes, but as individuals, as themselves, to become role models,” said Buffalo, who plans to give back by coaching lacrosse.

Both Buffalo and Bouvier are among the 2,000 athletes participating in the Alberta Indigenous Games in Edmonton this week.

“So it’s fitting that we’re here today,” she said.

The fund will offer two streams. One stream will see $5.3 million available annually to the 13 provincial and territorial Aboriginal sport bodies and the Aboriginal Sport Circle for the development of sport and physical activity community projects. The second stream will have $3.6 million available annually to Indigenous governments, communities and organizations, including delivery organizations working in collaboration with Indigenous communities, for projects that promote sport and physical activity in Indigenous communities.

“We want the money getting out to the sport councils, to our athletes and to our youth. We’re very excited about this program,” said Duncan.

“I love sport and I know the power of sport…. Sport also teaches life. How to dig deep on the hard days, how to set goals and to achieve them. Sport has the power to bring us all together,” she said.