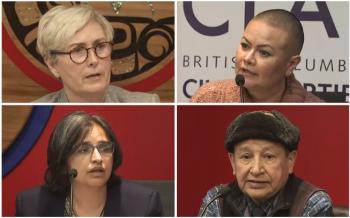 "Canada’s oversight of policing is clearly inadequate for First Nations. Even the commissioner is essentially saying to us, ‘I’m impotent to deal with this. Help me get the RCMP to respond.’ That’s a very sad statement about the state of policing." — Akikwe (Mary Ellen Turpel-Lafond)
By Shari Narine
Windspeaker.com Contributor

An announcement this morning by Public Safety and Emergency Preparedness Minister Bill Blair—that the RCMP had offered to move its position from Wet’suwet’en territory to a nearby town and that Canada had met the conditions of the Wet’suwet’en hereditary chiefs that would allow dialogue to resolve the solidarity demonstrations across the country—is indicative of the relationship between the federal government and Indigenous people.

“They announced it publicly without talking to hereditary chiefs,” said Sleydo’ (Molly Wickham), spokesperson for the Wet’suwet’en Gidimt’en Clan. Blair’s statement was described as performance, a media strategy.

Sleydo’ was speaking over the phone into a press conference held in Vancouver called by the BC Civil Liberties Association (BCCLA,), which released a strongly-worded letter from Michelaine Lahaie, chairperson of the Civilian Review and Complaints Commission for the RCMP.

In the letter she said the Wet’suwet’en, who were removed from their territory by force, arrested and taken to jail, faced “many of the same issues” the RCMP complaints commission had investigated seven years earlier when the RCMP engaged and removed Mi’kmaq anti-shale gas protests in 2013.

Lahaie’s correspondence was in response to two requests earlier this year from the Wet’suwet’en hereditary chiefs, the Union of British Columbia Indian Chiefs (UBCIC), and BCCLA. They had asked the complaints commission to investigate alleged infractions by the RCMP in its implementation and enforcement of a checkpoint and exclusion zone in Wet’suwet’in territory on the Morice West Forest Service Road in the ongoing dispute over the Coastal Gas Link pipeline project.

Lahaie said she would not conduct another investigation as “the Commission has already provided extensive guidance to the RCMP … about the very issues you raise with regard to the current situation in British Columbia.”

Lahaie’s interim report was presented to the RCMP Commission in March 2019. It has yet to be made public, as the RCMP has not yet responded to it in the year since.

Lahaie, however, did release a summary outlining some of the concerns she had provided the RCMP “extensive guidance” on in the 100-page report; on tactics that were still being employed in Wet’sewet’en, including misuse of detention and search powers; use of force; the handling of spiritual items and the interference of spiritual practices in the protests, among other issues.

On seeing similar human rights concerns with RCMP tactics against the Mi’kmaq on the East Coast and the tactics undertaken by the RCMP on the West Coast, Harsha Walia, executive director with the BCCLA, accused the RCMP of engaging in a “pattern of unlawful policing operations”.

“The RCMP has granted itself unlawful, discretionary and unjustified powers to set up and expand an exclusion zone, to arrest people within the exclusion zone who aren’t actually in breach of the injunction and they have unreasonably stopped and checked passengers and searched vehicles. There is absolutely no legal precedent nor established legal authority for such an overbroad policing power. Simply put, the RCMP operation in Wet’suwet’en territories have been unlawful,” she said.

Walia said the RCMP did not have any authority to set up blockades on Wet’suwet’en territory and doing so put “Wet’suwet’en jurisdiction at stake.”

Walia said the RCMP continued to target and harass Wet’suwet’en people, even though RCMP had had guidance on that in the interim report from the RCMP complaints commission for almost one full year.

Hereditary chiefs of the Wet’suwet’en nation, representing five clans, have long asserted their sovereignty and title right over the unceded territory in northern B.C.. Affirmed by the Supreme Court of Canada in the 1997 Delgamuukw decision.

Demonstrations in support of their title rights and against the pipeline have occurred across Canada, including action undertaken by the Mohawks at Tyendinaga near Belleville, Ont., where demonstrators have shut down rail traffic. Similar demonstrations across the country have effectively shut down the rail system in much of Canada.

The company building the pipeline in Wet’suwet’en territory—Coastal GasLink—was granted an injunction in December 2018 and RCMP raided the territory, dismantling camps in the path of the company’s work, arresting a number of land defenders.

“There are human rights violations that are occurring. The excessive force used by the police in last year’s raid has really put a fear into a lot of Wet’suwet’en community members,” said Delee Alexis Nikal, Wet’suwet’en Gidimt’en Clan.

In January 2019, the RCMP descended on the Gidimt'en Access Point, a checkpoint and encampment, and physically removed the barricade, again making arrests.

Nikal recounted being stopped this year by the RCMP at a road block when she attempted to take supplies and warm clothing to the trading post at kilometre 39, despite the RCMP website saying such access would be granted for food and emergency supplies. The temperature was minus 38 degrees Celsius.

“This constitutes a serious violation of Indigenous rights and jurisdiction, a severe depravation of individual liberty interests and an egregious impairment of Charter protected rights,” she said.

Akikwe (Mary Ellen Turpel-Lafond) called into question the effectiveness of civilian oversight to bring about changes within the RCMP. The director of UBC’s Indian Residential School History and Dialogue Centre, and professor at UBC Allard School of Law, said that was made apparent by the letter sent by complaints commission chairperson Lahaie.

That the Mi’kmaq, who had raised their concerns to the complaints commission seven years ago, have yet to receive a response on them had Akikwe shaking her head.

“Today we’re talking about urgent issues of justice for First Nations people. In the policing side, it throws it up in the air. Canada’s oversight of policing is clearly inadequate for First Nations. Even the commissioner is essentially saying to us, ‘I’m impotent to deal with this. Help me get the RCMP to respond.’ That’s a very sad statement about the state of policing,” Akikwe said.

Sleydo’ said hereditary chiefs needed to know what RCMP withdrawal from Wet’suwet’en territory would look like before they committed to any action. She said moving the temporary RCMP detachment from the traditional territory to a nearby community would not be acceptable.

“Wet’suwet’en is not in a position to tell any other nation that they need to stand down, and it’s been clear, and clearly communicated what the demands are for the Wet’suwet’en and for other nations who are standing in solidarity. That they will not stand down until these conditions have been met,” said Sleydo’.

“I would like to remind all of us that we are on the doorstep of the TMX issue, which will be equally volatile and explosive as the Coastal Gas Link pipeline,” he said.

Construction has begun on the Trans Mountain pipeline expansion which starts in Edmonton and terminates in Burnaby.