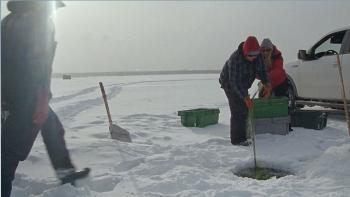 From Lake by Alexandra Lazarowich.

Joyce Wong’s Camera Test looks at what gets lost when female voices are stymied during the creative process. Pairing intimate interviews with absurdist re-enactments, Wong crafts a tartly subversive look at patriarchy and racism in the film industry. Produced by Justine Pimlott for the NFB’s Ontario Studio in Toronto, Camera Test was inspired by Cathy Quinn and Frances Leeming’s The Untilled Story, a mischievous feminist riff on vintage NFB instructional films in which the filmmakers enlist a kaleidoscope of petals in their resistance against the patriarchy.

One of the original Five Feminist Minutes filmmakers, Vancouver’s Ann Marie Fleming, is back with Question Period, in which a group of recently settled Syrian refugee women have questions about life in their new home. Executive produced by Shirley Vercruysse for the BC and Yukon Studio in Vancouver, the film is inspired by Fleming’s own New Shoes: An Interview in Exactly Five Minutes, which combines astonishing narrative shorthand with heightened visual poetics to trace the trajectory of a love affair gone bad.

In Radical, Deanne Foley profiles fellow Newfoundlander Mary Walsh, the Great Warrior Queen of Canadian comedy, musing on time wasted as an object of desire and time well spent as the fearless agent of her own destiny. Written by Walsh and produced by Annette Clarke for the Quebec and Atlantic Studio in St. John’s, the film is inspired by Come into My Parlour by fellow Newfoundland filmmaker Mary Lewis, who joyously reclaims “spinsterhood” from its sexist implications in this animated homage to the undauntable great aunt who provided her first driving lesson.