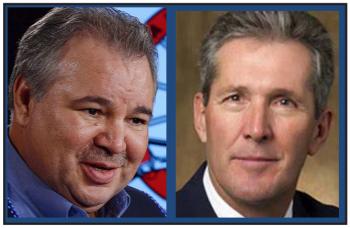 “The premier is actually acting on a premise of going to get vengeance against the Metis for standing up and holding him accountable for his actions and challenging him on his lies. We’ll call it that.” —MMF President David Chartrand
By Shari Narine
Windspeaker.com Contributor

The civil action the Manitoba Metis Federation is gearing up to take against the province is not solely about the money MMF is owed. It’s about not allowing itself to be bullied, says MMF President David Chartrand.

The Brian Pallister Progressive Conservative government has confirmed it will not continue with the tripartite agreement that saw Manitoba fund the MMF $290,000, dollars that were matched by the federal government. Chartrand says the MMF will be tacking that dollar amount onto a civil suit that is already underway against the province.

The basis of the initial suit is about $400,000 that was cut by the province in health funding to MMF. Part way through the last fiscal year, Chartrand says they found out the province would not be continuing the $600,000 it was funding for health care. Unaware of the impending loss as the funding dollars aren’t usually in MMF’s coffers until the fall, MMF continued to roll out its services as if the full funding was coming.

The $290,000 the MMF is adding to its civil suit against Manitoba is from tripartite funding not received in the last fiscal year. That money never showed up, but MMF used that amount as part of its operational budget.

“You wait until someone tells you something. (The government) kept on playing us along, saying, ‘Well we’re on it, we’ll get back to you,’ et cetera, et cetera,” he said.  “There was no indication from (Northern and Indigenous Relations Minister Eileen Clarke) that anything was in jeopardy.”

In a statement provided to Windspeaker.com, the province wrote, in part, “Significant momentum and funding now exists to further Métis self-government.  The overall mandate of the MMF- (Tripartite Self Government Negotiation) process has been fulfilled. Manitoba values its working relationship with the MMF and we continue to provide core funding.”

Chartrand says that the cut in tripartite funding was not due to self-government being achieved. MMF alleges it was vengeance by Premier Pallister because he blamed the MMF for the en masse resignation of the Manitoba Hydro board.

“The premier is actually acting on a premise of going to get vengeance against the Metis for standing up and holding him accountable for his actions and challenging him on his lies, we’ll call it that,” said Chartrand.

In June 2018, the MMF filed a judicial review two months after the Pallister government directed Manitoba Hydro to not proceed with a $67.5-million agreement that had been reached between MMF and Manitoba Hydro under the 2014 Turning the Page Agreement.

“He had no right. It was already negotiated between us and the Crown, so we became caught in this tale of tales and then now, I challenged him immediately on that … then punishment started to come down,” said Chartrand.

The government did not respond to Windspeaker.com request for comments on Chartrand’s accusations of Pallister’s “vindictive behaviour.”

Chartrand says the province’s funding is not pivotal, representing only about five per cent of MMF’s operating budget. However, the money had been targeted for specific programs and those cuts will now mean finding different jobs within the organization for 15 full-time employees and five contracted workers.

Chartrand expained it is because MMF’s existence isn’t tied into provincial funding that MMF is able to take a stand against Pallister.

“If you stay silent, then you’re as guilty as those who have done harm to you. So for me, that’s what’s so important, it’s the principle. No premier, no one, including the president of the Metis Federation, should have the right to arbitrarily do such harm to people without facing consequences….

“We can’t just let somebody come and bully you … and you be silent about it. If I be silent, he’s going to do it to others. If I hold him accountable, he’s going to have to think twice the next time he does it to somebody,” he said.

The rest of the budget is completed through own-source revenue from businesses and property owned by MMF which, Chartrand says is the largest Metis government in western Canada.