Métis Nation-Saskatchewan to host virtual Back to Batoche event 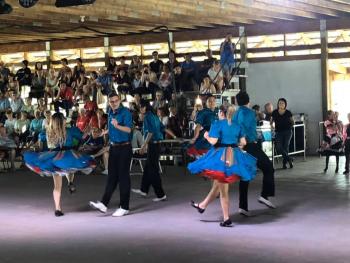 Back to Batoche is scheduled for July 23 to July 26 at backtobatochedays.ca

“Just being non-social is going to be huge, because Batoche is a coming together of our Métis people who live across our homeland.” —Sherry McLennan
By Tsering Asha
Local Journalism Initiative Reporter
Windspeaker.com

Back to Batoche, the annual celebration of Métis history and culture, will be held online this year as COVID-19 restrictions prevent people from across Canada from travelling to a physical event in Saskatchewan. The event is scheduled for July 23 to July 26 at backtobatochedays.ca

This year, which would have commemorated the 50th anniversary of Back to Batoche Days, is the first time the annual event has been postponed for in-person activities since its creation in 1970. The official 50th anniversary celebrations will now be held in 2021.

Despite the changes, organizers were determined to encourage Métis members across Canada to actively participate in the virtual celebrations, saying that the Métis community spirit is an uplifting one worth celebrating.

“As soon as that fiddle starts playing, the feet start tapping and the hands start clapping. Our hearts beat as one to the Métis music,” said Sherry McLennan, Batoche minister for Métis Nation-Saskatchewan (MN-S).

The online platform for Batoche Days will allow participants to submit videos of themselves competing in traditional Métis activities, such as jigging, fiddling, and square dancing, in a variety of age groups for cash prizes funded by MNS.

The event will consist of as many physical experiences as possible and then streamed online.

There will be a virtual food truck alley, featuring pre-recorded videos of participants cooking traditional Métis dishes, and Michif classes, the Métis language, and an online artisan market for local Métis to sell their wares.

In the evening there will be live-streamed music and Métis bands showcased.

Yet, even with extensive preparations to facilitate this virtual celebration, McLennan acknowledged that the physical aspects of hugging and embracing will be missing from this year’s program.

“Just being non-social is going to be huge, because Batoche is a coming together of our Métis people who live across our homeland,” said McLennan.

But, McLennan noted that one significant advantage to the change in plans is that the virtual gathering is more accessible to those outside of Saskatchewan, and especially for Elders who may be too old to make the journey.

“There are people from across Canada that are not able to make it during that week,” said McLennan, “but this way, at least, they’ll get a piece of the Métis culture by tuning in.”

McLennan said MN-S partnered with Canadian Geographic, who provided the digital platform for the virtual event, as well as communications and marketing.

A formal partnership had been launched earlier this year between the two organizations, which were initially working towards a common goal of revitalizing the Michif language and had hoped to integrate this mission into the physical Batoche event.

Canadian Geographic magazine, which has a readership of approximately four million Canadians, says they work with about 25,000 teachers across the nation as well. The organization wanted to amplify and leverage the existing work of MN-S in persevering and educating Métis youth in their language and culture.

A Canadian Geographic spokesperson says that MN-S approached the organization because of their previous work with the Indigenous Peoples Atlas of Canada.

The multimedia, educational resource was published in 2018 and featured one entire book dedicated to the Métis people in Canada.

“We began brainstorming with MN-S on how we could honour the value of the impact of the Back to Batoche celebration and still leverage that experience to help raise awareness of Michif language and Michif culture,” said Jason Muscant, director of development and partnerships at Canadian Geographic. “And we wanted to help bring everyone together as an homage to what the celebration means to the community.”

The two organizations had a movie of Batoche Days in the works, as well as programs for the event to have Michif language teachers and educators hosting workshops and summer camps.

Muscant says he is optimistic that the partnership will continue for next year’s 50th anniversary celebration.

“We’re hoping that with success this year, that we’ll have created an infrastructure that is able to support future virtual Back to Batoche celebrations,” said Muscant.

That gathering would usually be held at Batoche National Historic Site, the site of the battle of Batoche and the Northwest Rebellion of 1885.

McLennan says that MN-S is currently planning a large event for 2021, provided that COVID-19 restrictions on physical gatherings are lifted by then.

And both organizations say that focusing on keeping the Michif language alive is one of their main shared values.