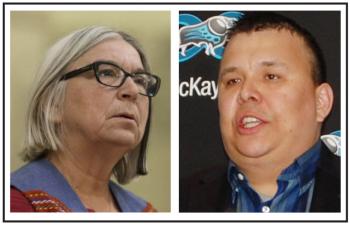 “For me, the biggest thing was, if I give up my card and go to a community where we only have a few members that reside in our community, we’re putting all our eggs in a basket that’s not proven.” — Lolita Ladouceur
By Shari Narine
Windspeaker.com Contributor

Despite a unanimous decision made by the seven members in attendance at a special meeting Nov. 28 to dissolve Local 63, the province’s Corporate Registry says that will not be happening.

The letter dated March 21 from the Corporate Registry places Local 63 “into a status of suspend.” The registry acknowledges having received a Dec. 7, 2018, letter from Local 63 confirming notification to dissolve the local. However, on Feb. 8, 2019, the registry received a request to deny the dissolution. The registry does not identify who made the request.

For any future filing to be made, the letter says a court order is necessary to establish who is authorized to file the dissolution.

Dan Cardinal, vice president for the Metis Nation of Alberta, says the provincial head office has not taken legal action against the local.

Jimmy Cardinal, president of Region 1, which includes Fort McKay’s Local 63, says the MNA will not abandon Metis in Fort McKay.

“We are going to do everything and anything we can to rectify this situation,” he said. “It’s a big deal for (even) one member. We leave no one behind.”

That one member may be Lolita Ladouceur, who never discarded her MNA citizenship in favour of the Fort McKay Metis Community Association (FMMCA).

“For me, for someone who has strong ties to the MNA, for us, that’s always been our government. If you take a new association, they can pretty much do whatever they want because they are an association,” said Ladouceur.

“For me, the biggest thing was, if I give up my card and go to a community where we only have a few members that reside in our community, we’re putting all our eggs in a basket that’s not proven.”

Ladouceur was not at the special meeting Nov. 28 in which the seven voting members in attendance passed a resolution to dissolve Local 63 stating it was “obsolete,” because Fort McKay Metis are represented by the FMMCA. Documentation was sent to MNA in December indicating the decision.

Ladouceur says she was aware that a meeting was to be held for FMMCA that evening, but did not know that the FMMCA meeting would be proceeded by the local meeting and a vote. Had she known, she says, she would have attended.

The Local 63 meeting was advertised on Nov. 6, 21 days prior to being held, in accordance with MNA bylaws.

Ladouceur says she was contacted in December and told to come to the FMMCA’s office to sign over her MNA citizenship. She went to the office but did not sign over her card. And because she didn’t, she says she wasn’t allowed to collect her Trust Income payment of $1,000. As those dividends were given out around Christmas time, she believes the payments enticed MNA local members to give up their citizenship.

Eddison Lee-Johnson, executive director with FMMCA, says dividends are given out annually from the Trust Income. FMMCA has lands, housing and assets and a community trust account. Through the McKay Metis Group of companies dividends have been paid out to FMMCA members for the past few years.

“The dividend is not the issue. It’s not an expectation.  It’s a benefit. It’s what everyone who is a member receives at the end of the day,” said Lee-Johnson

“The issue is who have you identified to represent you? If you are terminating your membership from the community association you’re simply saying, ‘I don’t want you to represent me.’”

The question was forced, he says, through the Metis Consultation Policy, which is being developed by the province in conjunction with the MNA. For years, McKay Metis have belonged to both the local and the FMMCA. However, the Metis Consultation Policy states that an individual “cannot authorize more than one organization to represent them for the purposes of consultation… (and that) is the only entity that can speak on behalf of those members.”

Lee-Johnson says FMMCA asked the government if the present structure could remain since Local 63 in 2012 gave the authority to FMMCA to represent them.  The government said no. Lee-Johnson said MNA President Audrey Poitras also said the MNA would not work with community associations. Dan Cardinal confirmed that that was the MNA’s position.

Disputes over jurisdiction between the MNA and FMMCA have been ongoing. In June 2018, the FMMCA filed a court injunction against MNA claiming the provincial body was interfering with local Fort McKay business.

The FMMCA has been active in negotiating with both industry and the province. In 2018, FMMCA purchased 372 acres of leased land from the Alberta government. Also last year, the FMMCA signed a long-term benefits agreement with Imperial Oil.

“We’re making sure it’s the community’s hands that are on the steering wheel and not some group in Edmonton,” said Ron Quintal, who serves as president for the FMMCA and until recently for the local as well.

Quintal unsuccessfully challenged Poitras for the position of president of MNA in the 2018 election.

According to Lee-Johnson, Local 63 has 19 members, 10 of voting age and nine under 18 years of age living in the community. He said everyone terminated their MNA memberships.

Jimmy Cardinal says that four or five members have since requested their MNA cards back.

The FMMCA has 116 members with three levels of membership, says Lee-Johnson, and all FMMCA members meet MNA criteria for citizenship. Some FMMCA members live outside of Fort McKay but have membership in the association because they are “Metis and grassroots of Fort McKay.”

In response to the resolution dissolving Local 63, the MNA issued a news release stating it remains “committed to engaging with governments, industry players, Metis leadership and citizens to explain the MNA Regional Consultation process and how to engage with the Metis people in Northeastern Alberta.”

Lee-Johnson says that industry has always insisted in negotiating with FMMCA, because of worry of “MNA potential attempt to interfere in the management and implementation of the agreements.”