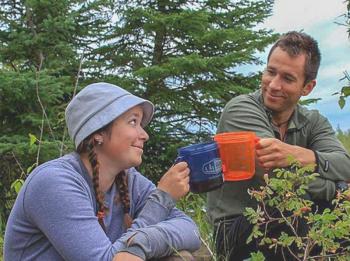 Photo from the Aski Holistic Adventures website. The business is operated by Michela Carriere out of Big Eddy Lodge near Cumberland House, Sask.

“I wish there was a gala this year too. [Last year] it was really nice to go there and make connections and talk to other Saskatchewan tourism operators.” — Michela Carriere, Aski Holistic Adventures
By Sam Laskaris
Local Journalism Initiative Reporter
Windspeaker.com

It has certainly been a challenging year for Michela Carriere’s business.

But there was some very encouraging news last week for the Métis woman, who launched Aski Holistic Adventures three years ago.

Carriere operates her business out of Big Eddy Lodge, located off grid, with the nearest community about 60 kilometres away at Cumberland House, Sask.

Because of the pandemic, Carriere’s business, which includes various Indigenous cultural activities as well as wilderness retreats, has been closed to the public since mid-March.

That’s why it was a huge positive when Carriere discovered Aski Holistic Adventures had won the Indigenous Tourism Experience Award, one of the categories of the Tourism Saskatchewan Awards of Excellence.

“It’s really important to win this award, especially this year,” Carriere said. “My business took a big hit with COVID. This award gives me a lot of hope for the future.”

This marked the 31st year of the provincial tourism awards. Because of the COVID-19 pandemic, the awards ceremony was held virtually last Tuesday.

An in-person awards gala had been scheduled for this past April in Regina but that was postponed.

“I was nominated for the same award last year, but didn’t win it,” Carriere said. “This year I was pretty excited to receive the award.”

Carriere had attended the 2019 awards ceremony, which was in Regina.

“I wish there was a gala this year too,” she said. “It was really nice to go there and make connections and talk to other Saskatchewan tourism operators.”

About 90 nominations were received for the various provincial tourism awards this year.

Since the awards had originally been scheduled in April, award winners were primarily recognized for their efforts in 2019.

Carriere said she was planning to reopen in October.

Technically, she is allowed to be open now. But Carriere said she has remained closed because of surging COVID-19 cases in Saskatchewan and across the country and out of respect for her community of Cumberland House, located in the northeastern part of the province.

“That’s our nearest community,” she said. “We go there and get all of our supplies.”

Carriere said Cumberland House, which has a large Métis and Cree population, did not have any COVID-19 cases in the first wave of the pandemic. But the community has had an outbreak in the second wave with about 30 recent cases, including the death of an Elder.

Carriere, who is 30, is now planning to reopen her business in February. She plans on organizing winter fat tire cycling races on snowy, groomed trails.

Aski Holistic Adventures has organized similar cycling races the past few years. Competitors from across Saskatchewan and Alberta, and also from some European countries have participated in previous events.

In the past, Carriere has organized three races per year, each one attracting about 30 entrants.

She said she’ll in all likelihood limit next year’s races to those who live in Saskatchewan.  And she believes she might have to stage some smaller events, with a maximum of about 20 participants, in order to comfortably house everybody afterwards at Big Eddy Lodge.

Her family has operated the lodge for almost 40 years now. And prior to that, Carriere’s grandfather operated an outfitting business on the site, dating back to the 1930s.

Because of her family’s business, Carriere learned how to canoe, hunt and trap at a young age. She’s also a certified wilderness first responder, horticulturalist and herbalist.

Since prize money is offered at some competitions, Carriere also calls herself a professional canoe racer.

Her father Solomon, who is 64, continues to enter and win his fair share of canoeing races that offer cash prizes.

Through her business, Carriere provides a number of different services.

During the spring and summer months, retreats include canoeing, tipi camping, plant gathering and cultural experiences.

And then in September and October retreats not only include canoeing and tipi camping but also wilderness survival, bird watching, berry picking and fall cultural events.