Metis burned out of village want their land returned 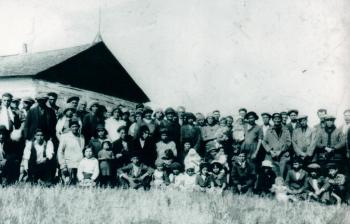 Ni Kishkishin / I Remember Ste. Madeleine opened on May 24. Photo courtesy of the Manitoba Museum

“He remembers the tears that were shed by both his mother and his father. I can only imagine the despair the families must have felt when they came home to ashes.” — John Fleury, minister with the Manitoba Metis Federation
By Shari Narine
Windspeaker.com Contributor

The Manitoba Metis Federation is hoping a new exhibition at the Manitoba Museum will give the organization traction with the Manitoba government to reclaim land.

Ni Kishkishin / I Remember Ste. Madeleine opened on May 24. It tells the story – in English, French and Michif – of 300 Metis citizens forced out of their homes in 1939 by the Prairie Farm Rehabilitation Administration (PFRA).

The provincial and municipal governments had deemed the land (among other parcels in the province) as marginal and designated community pasture. The village of Ste. Madeleine, which had existed for 50 years, was expropriated.

John Fleury, who as minister with the MMF holds the portfolio of the expropriation, knows the story intimately. His father George Fleury lived it.

“Through the years, my father would often repeat the story amongst the family and friends,” said John.

The elder Fleury spoke at the unveiling of the exhibition, recalling how his family returned to Ste. Madeleine from working for a farmer on the prairie to find their home had been burned to the ground. All that remained among the ashes was the stove and a bedframe. Even their dogs had been shot. George was four years old at the time.

“He remembers the tears that were shed by both his mother and his father. I can only imagine the despair the families must have felt when they came home to ashes,” said John Fleury.

However, the story of Ste. Madeleine and its residents doesn’t end there.

“Part of the story was that the people would get the land back at some point in time. I’ve never actually seen anything officially written to that effect, but you listen to the stories from the Elders. They said (the government said they) would give the land back and we never got the land and we were forced out of there.

“We were told we would be relocated and get another piece of land. Those who could pay taxes got the land and those of us who couldn’t never got it. And we were considered squatters. They felt no responsibility for us and that’s where (the Metis) ended up being the road allowance people in that area,” said John.

According to Metis historical records, the land area is approximately 17,697 acres. According to provincial mapping, it’s just over 20,436 acres.

John Fleury has made getting the land back a priority since he received the PFRA portfolio six or so years ago. He says working toward that end is emotional.

“As a family member, as a descendent of Ste. Madeleine, it really pulls at the heart. It seems as if there’s an urgency to get it back, because a lot of those children who were born in that era, there’s not many left. And we would like to see the province give something back before the last one is gone. So they could say they honoured us in one fashion.

“As the minister, it’s an injustice that’s never been properly addressed by both levels of government and we have to force them to step up and honour their words and hold them to their words. In the path toward reconciliation, it’s time for them to step up and be human and not just a system out there,” said Fleury.

Increasing the urgency is the province’s recent move to divest Crown land as part of treaty land entitlements or to give it to other groups, he said.

“So far we haven’t heard anything about anyone trying to grab a piece of Ste. Madeleine, because of the strong connection to the Metis,” he said. However, nearby drilling is cause for concern.

Fleury said the last time MMF met with provincial ministers over Ste. Madeleine was in 2017. They spoke with Agriculture Minister Ralph Eichler in March and Indigenous Relations Minister Eileen Clarke in October. Neither resulted in any movement.

On May 1, 2019, MMF officials met with Manitoba Agriculture staff. There was little discussion on Ste. Madeleine as the focus was on modernization of Crown lands.

An email statement from a spokesperson from Manitoba Agriculture confirmed the May 1 meeting.

“The Spy-Hill/Ellice Community Pasture was briefly discussed. Manitoba’s community pastures contain provincial Crown lands that are currently managed by the Association of Manitoba Community Pastures. The multi-functionality of these lands not only support the agriculture industry but are also important in meeting the Province’s biodiversity targets.  As the use of Crown lands are reviewed, Manitoba Agriculture will continue discussions with its stakeholders regarding best and highest use.”

“That’s how they treat us. It’s a very lacksadaisy approach. Duty to consult, I won’t say is off the table, but it’s very low on their agenda. Ste. Madeleine doesn’t seem to be a priority to them at all. It’s all on our side,” said Fleury.

“With this Conservative government that we have, Premier (Brian) Pallister, he’s not a friend of the Indigenous people and it’s making our job very difficult.”

Fleury commends the Manitoba Museum for “stepping up” with Ni Kishkishin / I Remember Ste. Madeleine and is hopeful the exhibition will “build even more advocates.”

This summer the MMF will be marking the 80th anniversary of the destruction of Ste. Madeleine.