Member says he wants referendum to remove chief and councillor 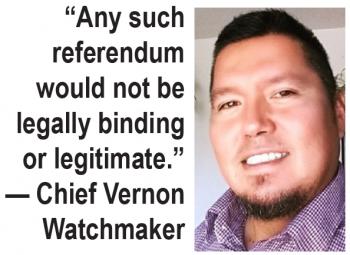 “At all times, I acted in the best interests of Kehewin’s members and upon their direction.” —Chief Vernon Watchmaker
By Shari Narine
Windspeaker.com Contributor

A group of Kehewin Cree Nation members are pushing for a referendum to get rid of their chief and one councillor, but that chief says the band’s Election Act won’t allow for such action.

“Any such referendum would not be legally binding or legitimate,” said Chief Vernon Watchmaker.

However, John Gladue believes that multiple contempt of court charges that were upheld against Watchmaker and Councillor Ben Badger are grounds for dismissal and he believes a referendum would work.

From there a series of elections and council meetings were held and the ability to hold those elections and meetings, along with the results and decisions, were challenged.

It is in this timeline that Gadwa, Watchmaker, Badger, and Mountain were prohibited from “holding himself out to the public” as chief or councillor. Their continued actions in these positions resulted in the contempt of court convictions, which were rendered in Federal Court Feb. 12, 2019.

Gladue admits that the Kehewin Cree Nation Election Act is “vague” when it comes to dealing with elected officials and legal convictions.

“But there is a Code of Ethics and Rules of Conduct.  All we have is ‘or other reasons’ to push the referendum,” said Gladue.

He asserts that the convictions are an indication of a violation of Sect. 17 (A) of the Kehewin Cree Nation Election Act, which states, “If any Chief or Councillor during their term of office is accused by any Member(s) of not conforming to the ‘Chief and Councillor Oath of Office and Rules of Conduct’ or other reasons, then the member(s) alleging shall in writing convey their concern(s) to the Elders Advisory Committee.” Neither the Rules of Conduct nor the Code of Ethics make specific reference to legal convictions.

Watchmaker told Windspeaker.com in an email that the charges and convictions stemmed from a “dispute between former leaders about the best way to govern Kehewin.  At all times, I acted in the best interests of Kehewin’s members and upon their direction.”

In his ruling, Justice Brown stated that “Watchmaker did not offer a convincing explanation for his actions, nor did he fully purge his contempt.” Given the “gravity of the contempt,” Watchmaker was fined $3,000.

As for Badger, Brown stated that he “purged his contempt,” which resulted in a “significant reduction” of his fine to $750.

Watchmaker says he wasn’t aware of a push for a referendum until he was contacted by Windspeaker.com.

“I believe whoever contacted you is just trying to stir up trouble and try(ing) to legitimize their attempts to undermine my leadership for their own personal gain,” he said.

Gladue says that isn’t the case and claims he is among a group of people wanting the referendum. He does, however, confirm a contract for an ongoing project he had with the band was not renewed.

“(Watchmaker and Badger) make my life miserable. I might as well return the favour and tell the whole world what happened,” he told Windspeaker.com.

Gladue said membership wasn’t aware of the charges when the most recent election was held for chief and council. It’s that same membership that will be voting on the referendum request that will be made to the Elders’ Advisory Committee (EAC).

The EAC consists of nine members, but only two would be eligible to rule on whether the referendum could take place, as seven are related to Watchmaker and Badger, says Gladue. The Election Act states under Removal of the Chief or Councillor(s) that “in the event there is a conflict of interest” between EAC members and chief and council, the EAC members could not participate in the review meeting. That same section also states that at a general meeting a vote of 50 per cent plus one of the Kehewin Cree Nation membership is needed in order to support a requested change which would result in a referendum vote.

The referendum being proposed calls for membership to either remove Watchmaker and Badger with a by-election to follow or allow the two elected officials to remain on council until the end of their terms in 2021.

The written argument calling for a referendum will be presented to the EAC “very soon,” said Gladue.