Medicinal cannabis an option to opioids in treating Indigenous patients 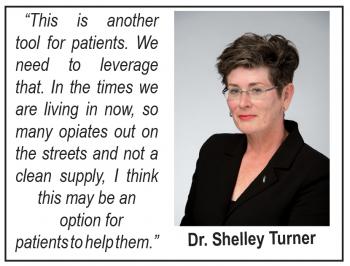 Cannabis is not covered by the Non-Insured Health Benefits program, which does cover opiates.

Medicinal cannabis is an opportunity for Indigenous people to “lead in returning to plant medicine” as a means of taking control of their health.

“We have to realize that this has been in our culture for millennia. There have been medicine shamans that have been found, thousands of years old, with cannabis on their person. It was obviously used in rituals. We, as a people, need to really consider doing what we know best, which is looking after what’s on the earth. I think cannabis is going to be something that may help us in terms of the addiction issues we have,” said Dr. Shelley Turner, an assistant professor at Northern Ontario School of Medicine.

For the past five years, Turner, also a family physician, who has taken extra training in addictions medicine, has been working successfully with patients in her Thunder Bay clinic, using cannabis to help them withdraw from opioids and sometimes alcohol addiction, or as a means to deal with pain.

She admits that initially she was skeptical when patients claimed that cannabis allowed them to sleep better, made them less anxious, relieved their headaches and other pains, and worked on arthritis.

“I’d listen to them and say, let’s see what the science is,” she said. “How can we be hitting every single receptor with one plant and helping patients?”

Cannabis is considered to be a neuro and an immune modulator. The tetrahydrocannabino (THC) and cannabidiol (CBD) in cannabis works within the body’s endocannabinoid system, which helps regulate things like pain, mood, sleep and the immune system. When the THC receptor in the brain is activated, it causes euphoria.

“This is dose dependent. In small amounts it is very well tolerated, with a lower side effect profile and reduced risk of addiction and that’s why these patients were finding some relief. They were getting that receptor activated so they felt less like they were in withdrawal and more comfortable,” said Turner.

With the new national guidelines for non-chronic pain treatment requiring physicians to prescribe less opioids, quick reduction in prescriptions have seen patients turn to the black market, while others have started methadone and suboxone treatment to break their opioid addictions.

Turner sees patients who are on methadone and suboxone.  She has used cannabis successfully on two patients to wean them off of suboxone.  She would also like to see cannabis used as first or second line for pain control instead of being third or fourth choice as it is now.

“It’s not without risks, but in that population, it’s the lesser of many evils and often quite medically valuable to these patients,” she said.

However, there is a unique challenge for Indigenous patients as cannabis is not covered by the Non-Insured Health Benefits program, which does cover opiates. Turner wants the NHIB to add cannabis to its coverage, as does the Assembly of First Nations. Turner is part of a group formed by the AFN to write a position paper on cannabis.

The sin tax on medicinal cannabis makes it difficult to afford. When patients buy illegally, they usually end up with cannabis higher in THC than CBD, if any CBD at all, and evidence seems to indicate that both THC and CBD can alleviate cravings and offer relief.

While patients have the opportunity to grow a small number of plants in their homes, such activity – along with using cannabis -- is largely prohibited in condominiums, apartments and rentals. These rules, which differ from property owners to communities to municipalities to provinces, have an adverse impact on those living in poverty.

“There are many issues we have in terms of patients having access. It’s work that needs to be done,” said Turner.

And it’s work that needs to be done now in light of the number of lives that are being taken by opioids.

“This is another tool for patients. We need to leverage that. In the times we are living in now, so many opiates out on the streets and not a clean supply, I think this may be an option for patients to help them,” said Turner, who in December is opening a second clinic in her hometown of Gimli, Man..

Turner is one of five people who will be presenting on “Social Responsibility and Harm Reduction” at the Hemp and Cannabis Conference to take place at Tsuut’ina Nation Nov. 18 to Nov. 21. The conference will also look at the federal framework, economic and industrial opportunities, and community policies and enforcement.