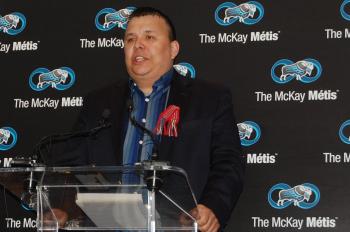 “What we’re saying is there has to be limitations and, in this circumstance, (Moose Lake) is one of the only areas we have left to truly try to protect and we’re willing to fight that come hell or high water.” — McKay Metis President Ron Quintal
By Shari Narine
Windspeaker.com Contributor

The Fort McKay Metis Community Association is hoping to get a hearing with the Supreme Court of Canada despite being turned down by the Alberta Court of Appeal.

This week, the McKay Metis filed papers asking the Supreme Court to hear an appeal of the Rigel oil sands project, which was approved by the Alberta Energy Regulator (AER) in June 2018.

The Prosper Petroleum Ltd.-owned project would see the development of oil sands extraction in the Moose Lake Area, a pristine space central to the history, culture and traditions of the Indigenous communities in Fort McKay.

In January, the Alberta Court of Appeal turned down an application by the McKay Metis to appeal the decision to approve the project. The McKay Metis argued that the Regulator’s decision infringed on Metis Sect. 35 constitutional rights. The appeal court rejected the argument saying there was no impact on Aboriginal rights to harvest.

However, at the same time the Alberta Court of Appeal was denying the McKay Metis permission to appeal, it was giving the go-ahead to the Fort McKay First Nation.

The Fort McKay First Nation asserted that the access management plan included a buffer zone of land within 10 km of the Moose Lake Reserves and addressed the First Nation's concerns about the effect of cumulative oil sands development in the Moose Lake Area.

The Rigel oil sands project, if approved, would operate within 10 km of the Moose Lake reserves and come as close as 1.5 km to Moose Lake. The Fort McKay First Nation had also offered constitutional arguments, which the Court of Appeal denied them permission to pursue.

“We ultimately could have gone in as an intervener in the Court of the Appeal with the (Fort McKay) First Nation, but the fact is, we don’t have the resources the First Nations do, so we chose to seek action with the Supreme Court of Canada so we could maximize our resources.

If our appeal is heard by the Supreme Court of Canada then we’ll definitely have to roll up our sleeves. If it is denied, there could be a potential opportunity to work with the First Nations,” said McKay Metis President Ron Quintal.

Quintal says that McKay Metis are starting where both Fort McKay First Nation and Prosper could end up. Whoever loses the Alberta appeal will, no doubt, make the move to be heard by the Supreme Court.

Quintal stresses this fight is not a battle by the McKay Metis against oil sands development.

“We’ve identified the fact that we need to work with these oil companies, especially given the economy of Fort McKay is very much centralized around servicing of oil sands. So we’re not saying we want to stop or shut down development. What we’re saying is there has to be limitations and, in this circumstance, (Moose Lake) is one of the only areas we have left to truly try to protect and we’re willing to fight that come hell or high water,” he said.

Funding for the court case will be coming primarily from the McKay Group of Companies, owned and operated by the McKay Metis. There will be no financial help from the Metis Nation of Alberta, as McKay Metis dissolved its MNA local in December and all members terminated their membership in the MNA.

“This is something our community has undertaken very specifically around our traditional territory,” said Quintal. “We’re the single most successful Metis community in Canada. It’s all the more reason for us to stand up for other Metis communities around Canada, to show them there is the ability to fight the good fight and, hopefully, other communities can follow us going forward.”

Quintal expects to know in the next few months whether they will be granted leave to appeal to the Supreme Court. He says only 17 per cent of cases are heard. If permission is not granted, no reason will be offered.

Rigel oilsands is a 10,000-barrel-per-day steam-driven project. It would impact 106 hectares of its total lease of 768 hectares. Construction is expected to cost $390 million. An additional $50 million will be spent on drilling and completing wells before start-up. Its expected production life is about 24 years.