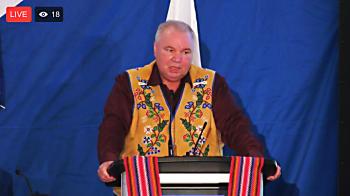 “I warned (MNC) we need to hold Ontario accountable, and we need to protect our homeland and our Nation because we worked too hard to get to where we are.” —David Chartrand, president of the Manitoba Metis Federation
By Shari Narine
Local Journalism Initiative Reporter
Windspeaker.com

After waiting two years for the Métis National Council (MNC) to reassert that the “true Métis Nation” has its roots in the Red River, and after not getting that assertion, the Manitoba Metis Federation formally withdrew from the MNC today.

“The MNC no longer represents the Métis Nation. It represents a pan-Aboriginal, other Indigenous and some non-Indigenous peoples. So it’s a different creature altogether,” said MMF President David Chartrand.

The MMF’s concerns centre on a move by the Métis Nation of Ontario (MNO) to open its membership to people who connect to historical Métis communities in Ontario but who may not have proven connections to Métis in the west. The MNO is a member of the MNC.

In 2019, 3,000 MMF members unanimously directed Chartrand to withdraw the MMF from the MNC if all of Ontario’s members were included as part of the MNC as those thousands of additional members would “dilute” the MNC.

“I warned (MNC) we need to hold Ontario accountable, and we need to protect our homeland and our Nation because we worked too hard to get to where we are. We devoted our entire lives to where we are and now we can’t risk it to open the floodgates and that’s what’s going to happen,” said Chartrand.

Chartrand was so sure that changes wouldn’t happen with the MNC that he made the decision to withdraw MMF on the very day of a court-ordered special sitting of the MNC general assembly. The court-approved agenda included an item on the status of the MNO.

He said the presidents of the MNO, Métis Nation of Alberta, Métis Nation-Saskatchewan and Métis Nation British Columbia argued in an Ontario corporate court that the MNC general assembly had no jurisdiction or authority to suspend the MNO as a member of the board of governors. MNC suspended MNO in 2020.

“So in my view, they don’t respect the assembly. They actually made it clear if the assembly voted against this issue, they’d probably go back to court. So what’s the purpose of the assembly if its own presidents don’t recognize its purpose or power?” he said.

Chartrand says the MMF will continue to focus on representing Red River Métis across Canada and internationally.

Right now, he says, he’s getting a “flood” of requests for citizenship cards for MMF. He’s even looking at hiring more staff to process them, which will include confirming genealogy.

“People from the west are telling us loud and clear they don’t want to be part of this anymore. This is not what they dreamed would happen to them,” he said.

Chartrand says the self-government recognition and implementation agreement signed with Canada this past July will now become the focus.

“MMF will have a modern day treaty and we’ll sit down with our First Nations brothers and sisters and co-exist in sharing the lands and respecting each others territories,” he said.

The special sitting of the general assembly will also be electing a new president for the MNC on Sept. 30. Clement Chartier, who held the position for 18 years, will not be seeking another term. The court-approved agenda did not allow any time for Chartier to give a farewell speech.

The last few years with Chartier at the helm had been contentious, seeing a lack of Board of Governors meetings and Chartrand often taking over as spokesperson. The last general assembly was held November 2018.

However, as Chartier was convener of the meeting before the new chairs were elected, he managed to address the delegates.

Revisiting the status of the MNO was in progress at press time.