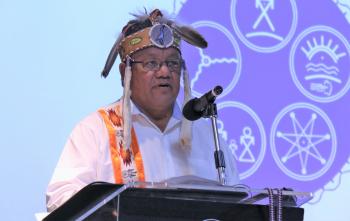 "This may be a demonstration in the way Anishinabek culture clashes with Canadian constitutional politics if people aren’t showing up, because that’s a cultural way to say No to something." — Damien Lee of the Yellowhead Institute
By Shari Narine
Windspeaker.com Contributor

Members of the Nipissing First Nation could return to the polls this fall to vote on the Anishinabek Nation Governance Agreement.

Even though more members marked their ballots in favour of the agreement during the February-long polling period, it did not meet the ratification requirement of 25 per cent plus one of the eligible voters to be in favour.

That threshold requirement meant 595 Nipissing First Nation voters had to mark their ballots “yes.” However, the total voter turnout was 494, with 236 voting in favour and 157 voting against. The First Nation has a voter list of 2,373.

A second vote to ratify the governance agreement will not have a voter threshold requirement.

Nipissing First Nation Chief Scott McLeod is disappointed, but not discouraged, by the outcome.

“We did get a very positive yes result from the vote. However, there were a lot of things at play,” he said.

Lack of communication and understanding about what the agreement is combined with a distracted electorate. National issues, such as the Wet’suwet’en supporter protests and concerns over the Coronavirus, and local work required in the planning of the Little Native Hockey League tournament in mid-March pulled focus from other issues, he said.

The ANGA recognizes Anishinabek First Nations have the right to make their own decisions and laws about leadership selection, citizenship, government operations, as well as how best to protect and promote Anishinaabe language and culture. The agreement has been in negotiations between the Union of Ontario Indians and the federal government for 25 years.

However, the ANGA has come under criticism with some, including members of the Indigenous think-tank the Yellowhead Institute, who believe the agreement hasn’t gone far enough and doesn’t offer anything that can’t already be received through existing federal policy.

McLeod stands firmly in support of the ANGA.

“We still believe it’s a good agreement to move us out of the Indian Act and hopefully we can do the work we need to do to educate the band members with the proper information,” he said.

To that end, McLeod anticipates that if council decides to hold a second vote it will take place in the fall giving them enough time to communicate and educate on the agreement.

Nipissing First Nation is not in a unique position. In fact, of the unofficial results posted by seven of the 14 First Nations that voted, only one met the “yes” vote threshold.

Moose Deer Point First Nation had 138 votes cast with 108 in favour of ratifying the agreement. One hundred and eight is the exact number required to meet the threshold of 25 per cent plus one.

Moose Deer Point First Nation Chief Barron King called the ratification an “overwhelming Yes on governance” in a message he posted on the First Nation’s website.

Like Nipissing, Whitefish River First Nation had a “yes” vote, but fell short on meeting the threshold.  With 737 eligible voters, 185 was needed to vote in favour to ratify the agreement. The voter turnout was 296, with 161 favourable votes and 128 against.

Four other First Nations saw the “no” vote winning out, although none of them hit their threshold for voting.

Beausoleil First Nation had 567 of its 2,116 eligible voters cast ballots with 376 voting no and 189 voting yes. The threshold to ratify the agreement was 530.

Mississauga First Nation had 1,110 eligible voters with 136 casting ballots. Fifty-nine per cent voted no while 41 per cent voted yes. The threshold to ratify the agreement was 279 voting yes.

Aundeck Omni Kaning First Nation had 699 eligible voters with 82 casting ballots.  Forty-three voted no and 39 voted yes. The threshold to ratify the agreement was 176.

Sheguiandah First Nation had 341 eligible voters with 56 casting ballots. Thirty-six voted no and 19 voted yes. The threshold to ratify the agreement was 86.

In a statement released by the Anishinabek Nation head office on March 6, Grand Council Chief Glen Hare said he was “pleased” that there were more “yes” than “no” votes for the first group of First Nations voting on the proposed ANGA. The official results won’t be available until March 11 at the earliest. That marks 10 days after the appeal process passes. However, if there are appeals, the date for releasing the official results will be pushed back.

“Although most of the First Nations didn’t reach the threshold, some were very close and could be eligible for a second vote at a later date. We are beginning internal discussions with those First Nations this week,” said Hare.

In May, nine other Anishinabek First Nations will be voting on ratification of the ANGA.

That May vote has an additional concern, says Damien Lee, with the Yellowhead Institute. For nations to vote on the ANGA, they need to have constitutions.

Lee points out that his home First Nation of Fort Williams had to postpone its February vote because it didn’t have a constitution. Eighteen First Nations had initially been scheduled for the February vote with 14 going ahead.

Lee believes that people need to participate in developing a constitution. For there to be “legitimacy and transparency,” the constitution should be ratified, he said.

Lee is also concerned about the no-requirement threshold on the second vote.

“I think it works in Canada’s favour, ultimately. I see Canada interested in relinquishing its responsibility for First Nations and one of the ways to do that is through … self-governance agreements. They get to make it as easy as possible for Canada to download its responsibilities,” he said.

Lee also calls the first vote requirement of a 25 per cent plus one threshold “very low.”

He says the low turnout in the first round of voting may have been an indication of a “no” vote.

“This may be a demonstration in the way Anishinabek culture clashes with Canadian constitutional politics if people aren’t showing up, because that’s a cultural way to say No to something. Maybe the deck is stacked,” said Lee.

Moving forward, he says, it has not been explained by the Union of Ontario Indians (UOI) what will happen with the First Nations who don’t ratify the ANGA. The Anishinabek Nation incorporated the UOI as its secretariat and has 39 member nations.

“Do they continue to have UOI represent them or does Anishinabek Nation split off from UOI and now there are two different bodies? What is the relationship afterward? What happens to the UOI? Does it continue to exist?” he asked.

In an interview with Windspeaker.com prior to the February voting, Hare said that after the February and May votes, the ANGA would be revisited in five years and he was confident that once the non-ratifying Anishinabek Nations saw the benefits that had been realized through the agreement, they would also come onboard.