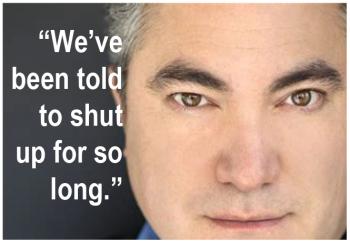 "I think if we listen to those voices who tell us to sit down and be quiet, I think that the Indigenous resurgence we are seeing, this Indigenous renaissance would never happen." — Kevin Loring
By Lance Cardinal
Windspeaker Radio CFWE-FM

Kevin Loring is an award-winning playwright and the first-ever artistic director of the National Arts Centre’s new Indigenous Theatre Department, which was recently denied $3.5 million in federal funding. Loring says he’s heart-broken about that. It’s been reported that it will “greatly diminish” the upcoming season.

“This is the second time the National Arts Centre has gone to Heritage (Canada) to try and fund the Indigenous Theatre Department. We were denied the first time and told to, for sure, apply the following year, which was this year. So we did and were again denied. So that’s two strikes for us.,” Loring told Lance Cardinal of Windspeaker Radio CFWE-FM.

He views that denial of funds as an “existential threat” to the department. Fortunately, the centre is “completely committed” to the department going forward, though Loring at one time felt the future of the national theatre project was “at a dangerous precipice”. He is now comforted that the department has become a permanent institution.

“And Indigenous theatre will go ahead regardless of the decision of the government.”

“We need to have our own voices on the national stage,” said Loring of the importance of the Indigenous theatre program.

“We need to have Indigenous voices, Indigenous perspectives telling our own stories in our own way. There is nothing more important than that… There’s been a lot of talk of reconciliation, but for me that’s not a word that I necessarily ascribe to. I don’t believe in that so much.”

What Loring believes in is reparation and reclamation, he said.

“For me it’s about reclaiming our voices, reclaiming our stories, our songs, our ways of viewing our cosmology.” He said there is nothing more important than the arts for that.

Loring said he’s been witness to the power of story to heal people, giving the example of an at-risk youth transformed by her engagement with his theatre company in B.C. in just months. From being unable to look up from her feet to being able to hold down two jobs with a “beaming, shining light” at her core, “that’s the power of story.”

The department has embraced the language preservation effort putting nine different Indigenous languages on the stage this year.

This is particularly important work on the national stage and in the United Nations year of Indigenous languages, he said.

Loring addresses recent criticism about his outspoken voice on social media about government's refusal to fund this program.

“We’ve been told to shut up for so long. We have to speak up. I think if we listen to those voices who tell us to sit down and be quiet, I think that the Indigenous resurgence we are seeing, this Indigenous renaissance would never happen.

“It’s the voices that stand up and speak on the top of the mountain, that’s the ones that you need. And I’ve been given this platform; this national platform at the National Arts Centre and I’m going to use it.” Especially now that the program has been denied what should be a corrective measure.

For 50 years the National Arts Centre has been presenting English and French works. And now they have finally corrected that by embedding an Indigenous department in the national artistic institution, “and yet again the government has denied us funding.”