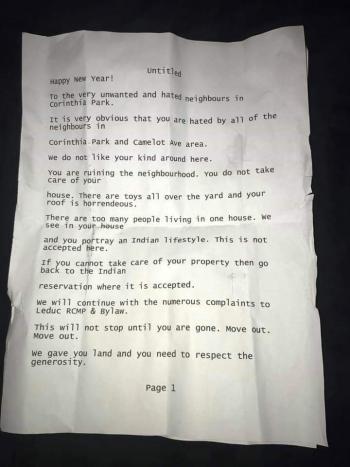 “You portray an Indian lifestyle. That is not accepted here... Go back to the Indian reservation where it is accepted.”

“Hey mom, I found a clue.” At first Mishel Assiniboine thought her five-year-old son had drawn her a picture. Instead what he handed her was a letter left at their door from someone in the family’s Leduc neighbourhood.

The writer had drawn a line in the sand. “Move out,” the letter demanded.

“…you are hated by all of the neighbours in the Corinthia Park and Camelot Ave. area.

“What is this?” thought the Indigenous mother of three. It was similar to a hate-filled letter which had had been delivered anonymously to a family in St. Albert last year and reported on widely.

But this letter had “been personalized for us,” said Assiniboine.

And that’s when the shock set in.

“I had to re-read it because it felt like it wasn’t real, Assiniboine told Jeremy Harpe of CJWE 88.1 FM Calgary.

But it was real and was “meant for us.”

After saying the family was ruining the neighbourhood, and complaining there were toys in Assiniboine’s yard, and her roof was “horrendeous” (sic), the writer went on to complain about the number of people living in the house and saying they could see inside.

“You portray an Indian lifestyle. That is not accepted here…

“Go back to the Indian reservation where it is accepted.”

The letter writer said the family had been complained about to RCMP and bylaw enforcement.

“This will not stop until you are gone. Move out. Move out.”

Then, curiously, the writer says ‘We gave you land and you need to respect the generosity. St. Albert got rid of their Indians and so can we.”

It was a reference to the family in St. Albert that receive such a letter. They moved from the neighbourhood in fear for their safety.

After sharing the letter with family and friends, it was suggested Assiniboine post it to social media. Assiniboine thought about that. She understood the dangers.

“I didn’t want to be pummeled by the public.”

But she needn’t have feared. “There was just so much support” and the community was against the letter, said Assiniboine.

“I felt really good about my community…. They don’t want things like this to happen.”

Never had the family suffered such overt racism against them. “Not to our faces.”

There had been vandalism to their home and vehicles over the past 20 years they had lived there. They just chalked it up to “this is what happens when you own a home in a city.”

While the letter was pretty nasty, it wasn’t enough to make Assiniboine want to leave.

“We’ve created really good relationships here,” she said. They like the community programs, the schools and the day cares “are amazing.”

Assiniboine hasn’t really explained the letter to her five-year-old. “What do you say to him, really?” She says her eldest son has had “overwhelming support from his friends.”

“I’ve had their parents call and say ‘Hey, that’s not Leduc’… Leduc is not about hate and racism.”

If the person is found or comes forward, “I think I would be shocked… It’s someone in my neighbourhood. It’s someone I know… Is it a neighbour I talk to? Is it one that I don’t?”

“It is an appalling letter, said Assiniboine, and I still don’t know what to think of it.”

Assiniboine says she tries not to cry. But she wants people to know that this has happened. “And this was happening in our community.”