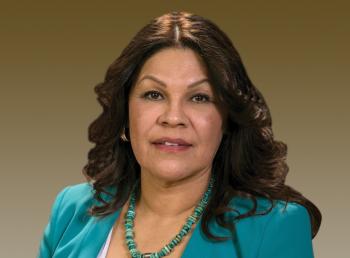 “It encourages people to work together on critical issues for all Canadians.”

But with that result, her job as an advocate for First Nations peoples may have become more complicated.

“It just makes it more where I’ll have to lobby other levels of government, not just the Liberals, to address the issues in Alberta on behalf of First Nations,” Poitras told Jeremy Harpe, host of Windspeaker Radio’s morning program.

Her office had put together a survey leading up to last night’s election, asking First Nations to share their priorities. The top items were compiled into a questionnaire and sent to each party.

Another was that citizens be provided the “basic necessities of life”—adequate housing, access to clean drinking water, a good education.

“A lot of First Nations are undertaking the work of nation building to establish their own governance systems by establishing laws, constitutions, protocols and service delivery, so it’s critical that any incoming government is supportive of First Nations exercising their sovereignty to provide their own services and generate their own wealth,” said Poitras.

“And, of course, this goes hand in hand with the treaty.”

The implementation of the Truth and Reconciliation Commission’s Calls to Action and of the United Nations Declaration on the Rights of Indigenous Peoples made the priorities list, as did ensuring that First Nations children and families that were discriminated against in the child welfare system receive fair compensation.

“And, of course, climate change is one of the issues.”