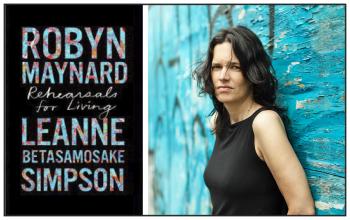 Book cover of Rehearsals for Living with a photo of Leanne Betasamosake Simpson. Photo by Nadya Kwandibens

“White audiences aren’t centred or catered to and I’m not doing a lot of educating white audiences, but I think it’s important for them to read books that aren’t necessarily written for them.” — Leanne Betasamosake Simpson
By Shari Narine
Local Journalism Initiative Reporter
Windspeaker.com

Rehearsals for Living is a powerful narrative that speaks reality to Indigenous and Black people and truth to everyone else.

The book is made up of a collection of letters written during the coronavirus pandemic between award-winning authors and scholars Leanne Betasamosake Simpson of the Alderville First Nation and Robyn Maynard, a Black feminist and grassroots activist.

The letters were a way to maintain a friendship that had been sparked in the territory of the Yellowknives Dene, when the two women shared outdoor experiences on the land.

“Then the pandemic hit. We wanted to find a way of continuing to build a relationship and to think through what we were witnessing together,” said Simpson.

“So Robyn wrote me a letter before the pandemic began, and then the pandemic provided me with a lot of time on my hands in my house and writing a letter back was something that made me feel, I guess, a little bit less alone, a little more engaged in the world.”

It was at this time that the stark reality of death and violence against Indigenous and Black people at the hands of the police came to the forefront.

“There were three fatal police shootings of Indigenous people in Winnipeg in ten days at the beginning of 2020, including Eishia Hudson, Jason Collins and Stewart Kevin Andrews. Between March and June 2020, the height of the first wave of COVID-19 in Canada, we have witnessed the deaths of Maurice Cardinal, Jacob Sansom, Rodney Levi, Jimmy Cloutier, Chantel Moore, Regis Korchinski-Paquet and D’Andre Campbell at the hands of police or white people,” Simpson wrote.

And, of course, there was the death of George Floyd, killed in Minneapolis by police while in their custody, which led to the resurgence of the Black Lives Matter movement.

But what she and Maynard saw was not new to them, says Simpson, and they both made that clear in their letters.

“I think, first of all, I wanted to affirm the experience that Indigenous people have in our community. We live with a lot of violence…and it’s almost been a normal occurrence for us. In a different, but related way, I think that Robyn makes the case that it’s also something the Black community in Canada have lived with.”

So, while white Canadians were waking up to the violence perpetrated on Black, Indigenous and people of colour (BIPOC), Simpson wanted to make it clear that “Indigenous peoples experience these deaths in a different way. It’s not a wake up call for us. It’s horrifying. It’s emotional. It’s part of us. I think that’s the part that I wanted white audiences to take away,” from reading the letters.

Violence, she says, can be found in the number of missing and murdered Indigenous women and girls, in the way police respond when Indigenous people are involved, and by the activities of extracting industries on First Nation lands.

Simpson says neither she nor Maynard had intended for their letters to become bound in a book. The seed was planted when Maynard went for a walk in her home city of Toronto with another Black Toronto author, Dionne Brand, and told Brand of the exchange of letters between the pair. Brand suggested doing something more with them.

Simpson admits both she and Maynard revised their letters, taking into consideration “how different audiences outside of the two of us would read them. So, I’m thinking primarily, ‘How is the Indigenous community going to read these letters and what things are they going to think about?’ and editing with that in mind.”

Simpson didn’t make a lot of changes, she said, but there were a few.

She also noted that she went into more detail about the Indian Act than she would have if she were writing only for an Indigenous audience.

“I know my Indigenous family, Indigenous people in Canada (are) well aware of the Indian Act and how it has impacted our lives. But the Black community might not necessarily be, so I think I thought about that component of it as well. So it was an invitation for the Black community and audiences to think alongside us,” said Simpson.

While the violence spotlighted during the months of the coronavirus pandemic wasn’t new to either community, Simpson says there seems to be a newfound solidarity within the BIPOC community.

“I think that I’m noticing that our youth, our Indigenous young people, are really doing this work, reaching out to the BIPOC community and are developing real sorts of relationships of care and of empathy and of solidarity,” she said. “(There are) parallels in experience that our people also face.”

Simpson is clear that Rehearsals for Living, like her previous work, is written “to and with and alongside Indigenous audiences first because I think that sometimes nobody writes books for us and so I wanted to continue that but also bring in Black audiences.”

However, she added, “White audiences aren’t centred or catered to and I’m not doing a lot of educating white audiences, but I think it’s important for them to read books that aren’t necessarily written for them. I think it can show a different perspective on reading and the world around you. Even though it’s not catered toward whiteness, I hope that white people will come along.”

Exchanging letters with Maynard, says Simpson, “gave me camaraderie and it gave me hope and I thought about things like Idle No More, about what the potentials are for building new worlds when we develop solid relationships with people we’re sharing time and space with. It was a practice of hope and it was a practice of connection and that was something that was beautiful and precious to me during the pandemic.”

That feeling also ties into the title of the book.

Rehearsals for Living, published by Penguin Random House is now available in bookstores and online through Amazon.ca. It’s also available as an e-book and audio book.