Letterkenny spinoff Shoresy gets gritty with hockey in a northern town 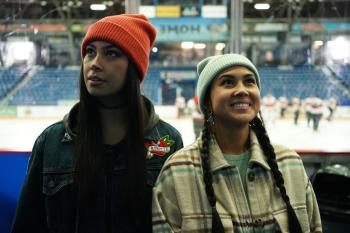 “I grew up not seeing people that looked like me on TV. I didn’t know it was a reality I could live and be part of.” —actress Keilani Rose
By Crystal St.Pierre
Local Journalism Initiative Reporter
Windspeaker.com

In most small communities across Canada, the hockey rink is a gathering space for families and friends. A church of sorts, where people come together to laugh, share stories and to cheer on their hometown team.

A new slapstick comedy series called Shoresy, from the creator of the Canadian favourite Letterkenny, captures that hockey lifestyle through the players, families, fans and management.

“It’s a story about a terrible hockey team in northern Canada that’s on a straight losing streak and their battle to come back and never lose again,” said actress Keilani Rose, who plays Miigwan in the Shoresy series.

Her character is described as one of the protégés to the general manager of the Northern Ontario Senior Hockey Organization team, the Bulldogs.

The team is made up of a mix of players from various backgrounds, including Indigenous, French- and Anglo-Canadians, and Newfoundlanders.

The six half-hour episodes began to air on Crave and Hulu on May 27.

Miigwan is part of a “trifecta of matriarchal women” who run the team in a hilarious way, said Rose.

“They keep the boys in line,” she said. “They are tough, they are intellectual, they’re quick, they’re witty and they hate the hockey players. They love chirping the hockey players and they are just entirely dedicated to the love of the game and sports bringing people together.”

Kesso, who not only wrote, but also directed the show, plays the main character on the team, whose goal it is to turn the Bulldogs into winners.

“It’s wild, it’s filthy and it’s rough,” said Rose. “I feel like a lot of the audience is really going to love it.”

Rose, originally from Prince George, BC, said she grew up in a family of females and wasn’t exposed to the roughness of boys or the hockey world, but she feels this show is a true representation of this lifestyle.

She also noted that a few of the Bulldog players had played hockey at various levels in their real lives, but this was their first time acting. Rose said she thinks it makes the on-ice portions of the show even more authentic.

“I feel the hockey fans of this show will feel at home when they watch it because these guys are truly, truly skillful on the ice,” she added.

Rose, who is of Lheidli T’enneh and and Kānaka (Native Hawai’ian diaspora) descent, has been working on several projects over the past year, including Breathe and SkyMed, an upcoming series about first responders outside of Winnipeg.

“The writers (of SkyMed) do a beautiful job of exploring representation for Indigenous communities and talking about some really important topics surrounding racism in the health care system,” she explained.

Being part of these diverse shows and representing her culture on screen, is a great honour for Rose. She said growing up she never knew it was even a possibility for her.

Rose is also the founder and executive director of Two Rivers & a Rose Filmworks, which is her production company dedicated to amplifying messages of equity and diversity.

Currently, she is taking some time in her other homeland, Hawaii, to write.

“I feel it’s so important and a gift right now when I am invited and included in these spaces where they’re really stepping up to this call in the industry and in the world to be more supportive in diversity and more truthful in representation,” she said.