Leaders dismiss slate of legislation in 'clear' message to Trudeau 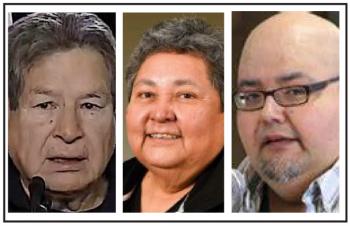 “At the beginning of their term they promised they would work openly, honestly and with respect and I don’t see that happening today.” — Chief Jessica Hill Oneida Nation of the Thames
By Shari Narine
Windspeaker.com Contributor

Chiefs from the Association of Iroquois and Allied Indians have told the Trudeau government they will not stand by and allow federal legislation to pass that does not uphold the rights of First Nations.

“Canada over the years has subjected First Nations to many things, including residential schools in which we were forced to learn English … but the sad part is, even though we now know how to speak English, it still appears as if Canada does not understand the words that are coming out of our mouths. So we want to make it plain and clear that we oppose any of these federal legislations that attempt to make First Nations subjects of Canada,” said AIAI Grand Chief Joel Abram.

AIAI chiefs took their message straight to Ottawa where they delivered it on April 1 at the National Press Gallery, where Prime Minister Justin Trudeau regularly addresses the media.

In March, AFN National Chief Perry Bellegarde sent a letter to Crown-Indigenous Relations Minister Carolyn Bennett expressing displeasure that the government was implementing processes associated with the framework despite chiefs’ concerns. However, Bellegarde went on to propose an “alternative approach” despite those same chiefs not giving AFN the mandate to do so.

Delaware Nation Chief Denise Stonefish accused the government of continuing to impact her community and her people through legislation for child welfare and languages, as well as a 10-year funding deal through the fiscal policy.

She said any claim by the government that First Nations were in favour of piece-mealing legislation that makes up the framework is “manufactured consent.”

“Government rights recognition framework is still pulling out of the station, regardless and it needs to stop because we’ve had no involvement in the process. We have not consented.”

Mohawks of the Bay of Quinte Chief R. Donald Maracle said the only way the government could move forward with First Nations was through open discussions to remove mistrust and grievances.

“This is what the Crown should be doing in the legislation. They should make sure they get it right so that it does satisfy our understanding of the Crown’s obligation in the treaty relationship as a nation of people,” he said.

Chief Jessica Hill Oneida Nation of the Thames called out the Liberal government for not living up to its election promises.

“At the beginning of their term they promised they would work openly, honestly and with respect and I don’t see that happening today,” she said.

She also pointed out that the framework included no economic support or stimulation for First Nations.

“We live in poverty and there is no plan for us going forward. So when you’re put in a situation like this it is very difficult for a First Nation to accept or agree to a framework that does nothing for us,” said Hill.

The AIAI has not been alone in its condemnation of the framework legislation and the federal government’s process or of the AFN’s role in moving forward without consulting chiefs. The Union of British Columbia Indian Chiefs recently came down hard on Bellegarde, disputing his claim that the AFN’s alternative approach was endorsed by the AFN’s Chiefs Committee on Lands, Territories and Resources.

“First Nations have to lead that process of decolonization and it cannot be done based on principles set forward unilaterally by Canada. They must be agreed upon principles…. We just want to make sure Canada is clear on where the Association of Iroquois and Allied Indians stands and we stand to uphold the rights of our nations so therefore we cannot agree to legislation that does the opposite,” said Abram.