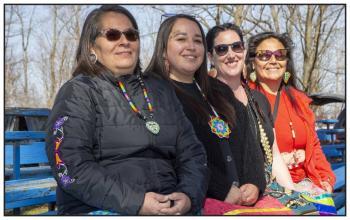 “My mom never learned it and I never learned it, so when my kids were in school, they were just sponges and just soaking it up.” — Julie MacFarlane, Ojibwe, language learner
By Calvi Leon
Local Journalism Initiative Reporter
London Free Press

Julie MacFarlane always wanted to learn Ojibwe, a language that no one in her community speaks fluently.

“My generation basically lost the language due to residential schools,” said MacFarlane of Chippewas of the Thames First Nation, southwest of London.

The language is now being taught in schools – but there remains a gap of multiple generations that never learned it. And it wasn't until MacFarlane noticed how quickly her three young children picked up the language in class that she decided a couple years ago that she'd do the same.

“My mom never learned it and I never learned it, so when my kids were in school, they were just sponges and just soaking it up,” she said. “It was really important for me to start learning it to keep pace with them and keep it in our home.”

MacFarlane recently marked one year of learning Ojibwe, joining 10 other graduates of the First Nation’s language immersion program to celebrate how far they – and their community – have come to revitalize the use of their language.

“This experience for me has been unbelievable, especially to do it with my peers,” MacFarlane said.

The day-long event drew nearly 100 people, many young kids and families, to the Chippewa Ball Park, where artwork made by graduates and community members lined the venue. Beginning with an opening prayer led by an Elder, the day featured various events including a brief history of the First Nation, keynote speakers, and a drum contest.

“The event is really about recognizing the efforts that (language graduates) have taken upon themselves,” said Jacqueline French, chief of Chippewas of the Thames. "It's going to make a difference in our community, not only today but for the next seven generations.

“Hopefully, in the next seven generations, we'll have a community of fluent citizens.”

Betsy Kechego, a language immersion teacher, wants to see more funding to support language revitalization and to keep Ojibwe speakers in the community.

“There’s no accreditation to taking language programming and there's no funding for that, so it's really hard for language learners to go out and learn . . . and provide for themselves while they're doing that learning,” she said.

But Kechego and other leaders in the community are looking to change that with a newly created partnership with Fanshawe College to create two accredited Ojibwe programs.